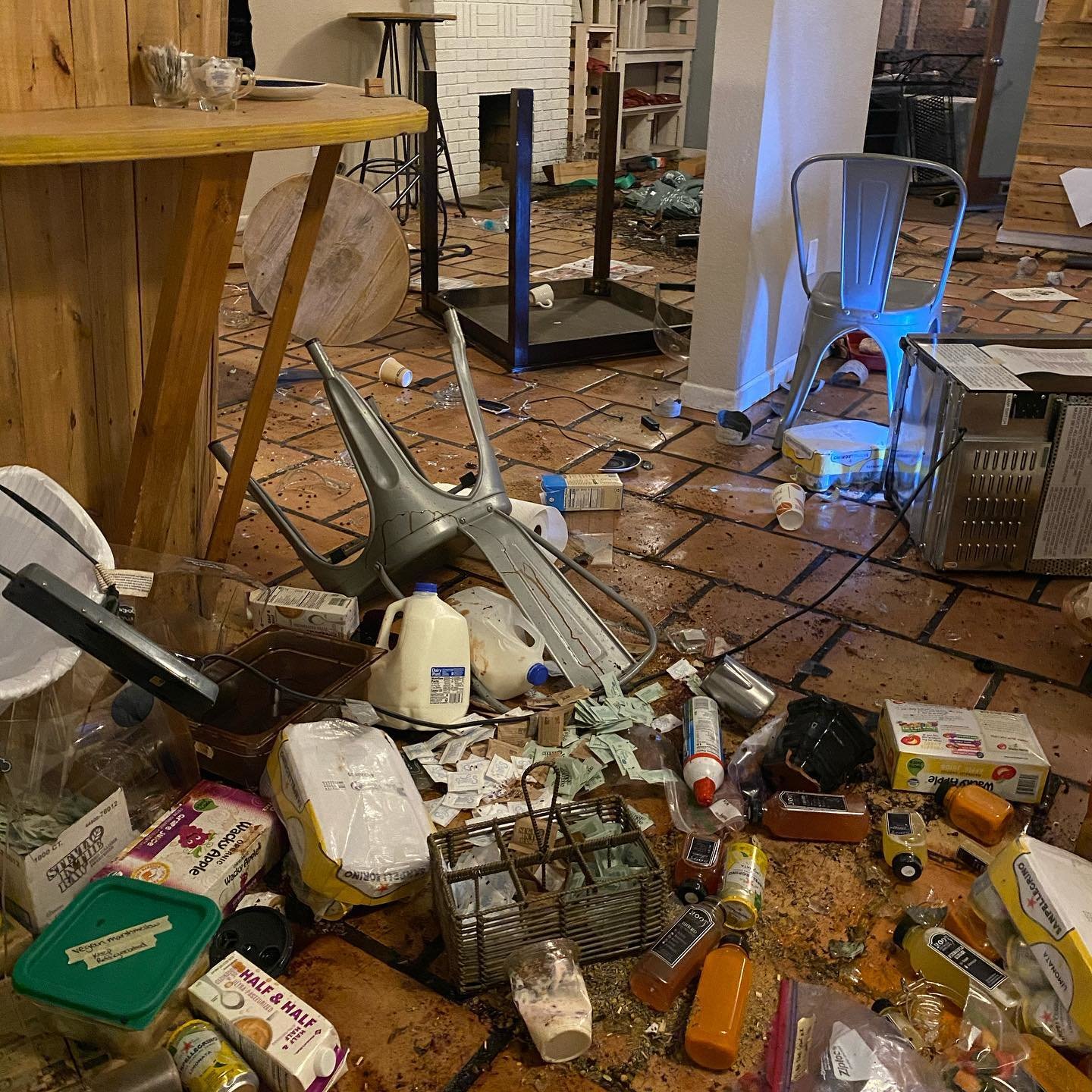 In the early morning hours of April 24, Beck’s Roasting House and Creamery was brutally vandalized. Community support includes a gofundme account at https://gofund.me/ac6c5a9e.
Posted Tuesday, April 27, 2021 11:33 am
By Richard Coltharp

The first week of April, Arianna Parsons and Tyrell Thacker were marveling at the beautiful interior restoration progress of Willow & Blaine, their latest entrepreneurial business venture.

Located in an old, historical building, Willow & Blaine will be a restaurant, wine bar and patio garden on the 100 block of North Mesquite Street, across from Klein Park, and next door to their initial venture, Beck’s Roasting House & Creamery.

The excitement and anticipation of the soon-to-open Willow & Blaine gave Parsons and Thacker, who are married with two sons, much to look forward to.

The giddy highs of the future, however, came crashing down with the lowest of lows of the present in the early morning hours of Saturday, April 24.

That’s when one or more vandals smashed the windows of Beck’s, entered the building and proceeded to thrash and trash everything they could, leaving behind violent messages scrawled across furnishings.

Arriving at Beck’s about 5 a.m. was Parsons’ baker, Monica, who came to work to get started on the Saturday pastries. When Monica saw the devastation, she immediately called the police. Her next call was to Parsons, who drove to the shop immediately.

“Clearly, I wasn’t thinking, because I put on my shirt inside out, which I didn’t even realize until about 2 o’clock that afternoon,” Parsons said.

“At first we didn’t go in because the police weren’t there,” Parsons said, adding that they arrived about 40 minutes after Monica’s initial call.

“The lights were on, and music was playing, and it just looked like broken windows,” she said. “But when we got closer, and saw all the damage that was done, it was hard to take in.

“I just started crying,” Parsons said. “It’s really emotional seeing what is, essentially, your home like that. We were terrified, but grateful no one was hurt.”

Parsons and Thacker have owned Beck’s for eight years, growing their business through a quality product, excellent service and relationships with customers. In June 2020, despite the pandemic, they opened a permanent location on Main Street, Beck’s Express, the modified shipping container next to Organ Mountain Outfitters.

While the vandals’ interior damage was substantial, the most vital, expensive pieces of machinery were unharmed. Insurance cannot cover the loss of revenue for the days Beck’s had to be closed, but spirits were buoyed by how quickly employees, friends and community members helped get the shop cleaned up.

“It was just an absolute mess,” Parsons said. “It won’t put us too far behind, but we’re still assessing.

“Emotionally, we’re trying to not focus on the who and the why, because that can make you crazy,” Parsons said. “We’re focusing on next steps, what we do, and how we compensate our 23 employees.”

The one bit of levity, wrapped in wisdom, came out of the mouth of Arianna and Tyrell’s 4-year-old babe, Thomas: “Some sneaky person came in and made some really bad choices.”

If those choices were a result of behavioral health problems, Parsons hopes for a sincere, supportive response from authorities.

“It’s important to me, if this was someone with mental health issues, we don’t just throw them into jail,” she said. “They really need help.”

She also doesn’t want the issue to be a black eye on the Mesquite Historic District.

“This has been such a safe neighborhood and home for so many years,” she said. “This really appears to be the actions of one individual.

“The most important thing to us, has been the sense of community and outpouring of support. It really makes me emotional.”

If you would like to be part of that community support in a financial way, a gofundme account for Beck’s recovery has been established at https://gofund.me/ac6c5a9e.