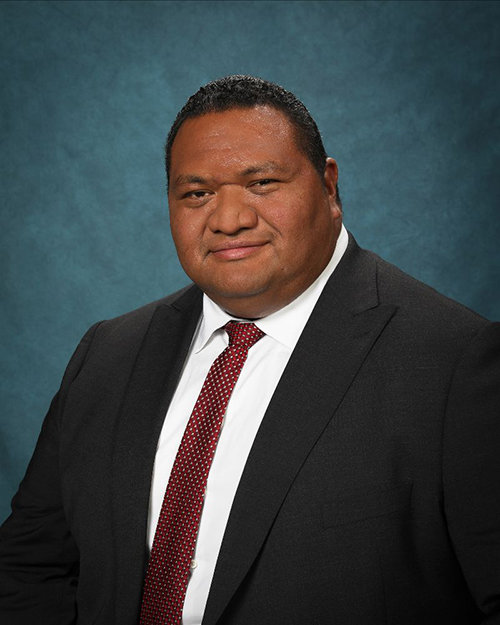 “I’m really excited about where we’re heading,” Ifo Pili said, as he begins his second year as Las Cruces city manager. His first day with the city was Sept. 8, 2020.

Pili, a native of American Samoa, and his family came to Las Cruces from the City of Eagle Mountain, Utah, where he began work as a management analyst in 2006 and became city administrator in 2012.

Before moving here with family (wife Jenny Patterson Pili and eight children), Pili said he had heard that “the people are what make Las Cruces what it is.”

Las Cruces has “a small-town feel, but in a good way,” Pili said.

Las Cruces is about twice the size of Eagle Mountain, which is part of the Provo-Orem, Utah Metropolitan Statistical Area. Its home, Utah County, and Salt Lake County to the north have an unbroken line of cities and towns totaling about 2 million people, he said.

Having started his job in Las Cruces during the peak of the pandemic, Pili said he is still exploring the city. Last month’s Aggies in Paradise fundraiser for NMSU athletics at Aggie Memorial Stadium was the first major public event Pili has attended since coming to Las Cruces, he said. He and his family have also been to other local events, including the city’s Music in the Park and the Farmers and Crafts Market of Las Cruces. He’s also dined at many local restaurants.

“Seeing the city open up is just awesome,” Pili said. “I’m looking forward to a lot of things.”

Pili said he is enjoying working with Mayor Ken Miyagishima and the Las Cruces City Council.

“They’ve got heart and conviction for what they do,” Pili said. “I appreciate that.”

The same is true, he said, for city staff.

Possibly his biggest surprise since becoming city manager is that, despite Covid-19, “we haven’t taken a hit on gross receipts tax,” Pili said.

“In fact, it’s gone up. People are spending more,” he said, and the city is now getting revenue from Internet sales. Funding from the state and federal governments also has “helped us to continue as usual,” Pili said.

And, while the future remains uncertain because of Covid, Las Cruces is doing well, he said. Businesses are looking to come to Las Cruces, there are opportunities to grow the film industry here and the future of Las Cruces International Airport is “one we can be excited about,” Pili said.

With an investment of $60 to $70 million, the city is “building a real airport that can compete,” Pili said. “That’s huge.”

The city is also investing more in infrastructure, Pili said, as the city council recently voted to boost this year’s budget for road maintenance from $4 to $6 million.

“Roads are your biggest asset,” Pili said, adding that he has been particularly impressed by the city’s pavement management system.

With support from the state, Pili said roads will continue to be an important focus, for the city, including the possibility of constructing a road connecting the Las Cruces industrial park with Santa Teresa.

Despite his hopes that she would attend New Mexico State University, Pili said his oldest daughter, Lia, is now a student at Brigham Young University. BYU is both her parents’ alma mater, and “her dream school,” he said.

The other Pili children, ranging in age from 5 to 18, are “doing really well,” he said. They have “great schools and great teachers” and are participating in Las Cruces Public Schools sports programs and other activities in elementary, middle and high schools, Pili said.

“I’m really impressed with our school district,” he said.