Playing Batman in the “atomic” car 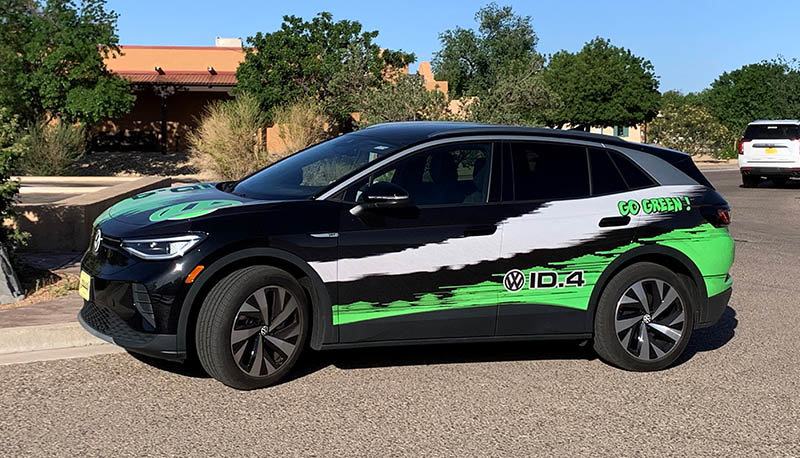 Thanks to Sisbarro Volkswagen and El Paso Electric, I got to be Batman for a weekend.

I’m a lifelong fan of Batman, in nearly all its forms, particularly the mid-1960s TV show. You know, the one where Adam West as Batman, and Burt Ward as Robin, hop into the Batmobile and say, “Atomic batteries to power! Turbines to speed!” And then they race out of the Batcave toward Gotham City.

Rick Nezzer and Mike Tourtilott of Sisbarro gave me the opportunity to test drive Volkswagen’s all-electric SUV, the ID.4. And because El Paso Electric gets about a third to half of its power for Las Cruces from the Palo Verde nuclear power plant in Arizona, you can legitimately call electric vehicles charged here atomic-powered. El Paso Electric also gets power from natural gas plants, and some from solar, but neither of those sound as cool as atomic-powered.

If your impression of an electric car is of a wimpy, low-powered golf cart, think again. Those of you who have driven or ridden in a Tesla know what I’m talking about. The torque on acceleration makes it feel more like a rollercoaster than a car.

The ID.4 doesn’t have quite the torque as a Tesla, but it costs about $25,000 less, too. And the Volkswagen is no slouch when it comes to acceleration. I loved the way it handled, braked and kicked in the power when I needed it.

As in the Tesla, much of the vehicle is operated from a big computer screen panel on the dashboard, about midway between the driver and the passenger. The screen takes some getting used to as you learn all the intricacies and capabilities. And the dash is not the only difference from the typical combustion-engine vehicle.

Ironically, the same day I picked up the ID.4 from Sisbarro, I also picked up my car from the repair shop, which had about $250 of repairs done to parts an electric car doesn’t even have.

An electric car, of course, has no gas tank. It also has no oil pan, spark plugs, radiator, fuel pump, water pump, manifold, pistons and other gas-engine standards. An electric car still needs windshield wipers, a fan and, not just a battery, but a great big battery.

If you had your own electric car, you’d have a power plug-in station at your home, and you could charge it every night. Without that, or when you’re traveling, you’ll have to know where all the charging stations are on your route.

A fully charged ID.4 will give you about 250 miles of range. Because I didn’t have the capability to charge the vehicle for a full 8 hours, I had to do intermittent charges. It was kind of cool, on Saturday, to plug the ID.4 at the public station on Organ Street Downtown, while I sat on the Boneyard Cantina patio, eating nachos and listening to Chris Baker as I kept an eye on the vehicle.

Tesla, in an apparent attempt to be the Apple of electric car manufacturers, created a charging system unique to its vehicles, so it’s not interchangeable with other electric vehicles.

It’s clear electric cars will be a part of our transportation future, but predicting their niche is still a bit tricky.

If I were to own an electric car, and had the charging station at my house where I could plug it in every couple of nights or as needed, I would use the vehicle as my primary in-town transportation. For out-of-town trips, however, until charging stations are more prevalent, I’d stick with a traditional gasoline vehicle. The ubiquity of gasoline filling stations means you’re not having to do stressful guesswork or careful planning required of an all-electric trip.

Americans tend to get annoyed if we have to wait more than 90 seconds for a pump to free up in a crowded gas station. Can you imagine the frustration if you reached the only charging station within 60 miles, and someone was already plugged in, needing to stay plugged in for a couple of hours.

The interior of the car was a treat. The comfortable seats even have a vibrating option. The air conditioning worked great, and the sound system was top notch, readily synching in with the music programs on my iPhone.

I never could, however, find the slot for my cassette tapes.