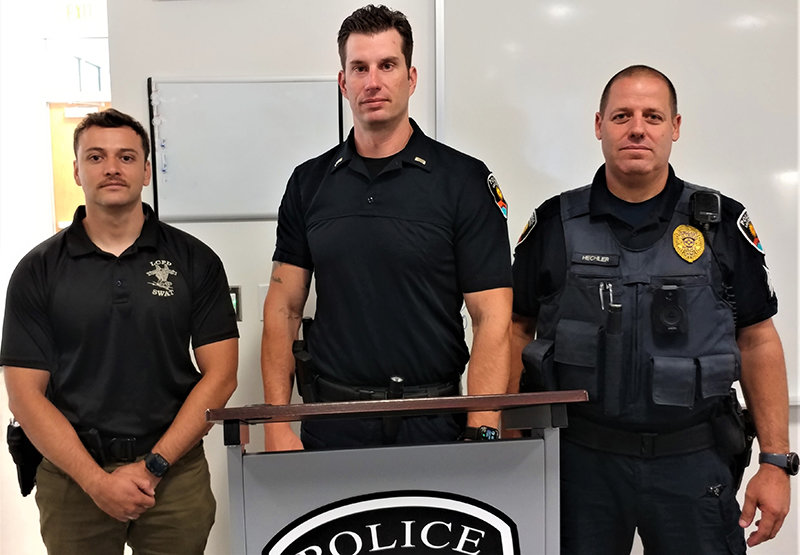 The department has almost 200 total positions, and currently has about 150 officers, which is “the lowest in a very long time,” Story said. LCPD’s current recruitment drive ends July 30.

The “sentiment across the U.S. … the negativity that’s out there,” has “affected recruiting and morale” in Las Cruces to some degree, he said, even though LCPD has strong support from the community, city management, Mayor Ken Miyagishima and some members of the city council, Story said.

The pandemic has also made recruiting more difficult for police departments and “across the spectrum,” said Police Academy Coordinator David Rodriguez.

Understaffing has meant more overtime for current officers, who are coming in early and staying late so the department can continue to answer calls for service, said Story, a former U.S. Marine, who has been with LCPD for 15 years.

“I feel like I’m making a difference,” he said. “Every day, you wake up and you know it’s going to be different.”

“It’s a different environment from any kind of 9 to 5,” said Rodriguez, a native of El Paso who is beginning his eighth year with LCPD.

“It’s a good career,” he said. “You can make an impact on the community you live in.”

Rodriquez said he gets some questions from recruits and the public about qualified immunity for police officers.

He says LCPD officers receive “more positive feedback than negative, even on their worst day.”

While they don’t always get thanked for the service they provide, Las Cruces police officers have “overwhelming community support,” he said.

“We appreciate the women and men of law enforcement, and we recognize that those who choose this career do so because of their calling, which is to help protect our community while making a difference in the lives of their neighbors and our residents,” Mayor Ken Miyagishima said. “We appreciate the families who give so much through their sacrifice and sometimes when their family gives the ultimate sacrifice. The city owes a tremendous debt of gratitude that we can never repay.  I ask all of our residents when they see a police officer to say: ‘Officer, thank you for your service; I appreciate you very much!’"

LCPD is “more professional now than ever” in terms of its training, standards and accountability, Story said.

“Las Cruces has a very well trained, professional department,” he said, but it “can always be better.” LCPD continues to focus on improved training and increased professionalism to “deliver better service,” Story said.

“I always wanted to be a police officer,” said Sgt. Erik Hechler, a native of Truth or Consequences. Hechler joined LCPD a decade ago at age 30, after a 10-year career in construction, and said he felt “a calling to do it.”

Being a part of LCPD's Community Outreach Unit is “right where I fit in,” he said. “It’s been rewarding for me. You do something that makes a difference.”

The six-member Community Outreach Unit is focused on creating partnerships within the community, Hechler said, and interacting with people.

Members of the unit participated in drive-by parades for a Las Cruces retirement community during the pandemic lockdown, Hechler said. They also partnered with staff from Buena Vida Apartments, 1505 La Fonda Drive, to repair and replace basketball goals on that property in June, according to a City of Las Cruces news release. Officers support New Mexico Special Olympics, including participation in Law Enforcement Torch Runs. They also have been involved in local Keep Las Cruces Beautiful cleanup efforts and they helped with last month’s repainting and refurbishing of the Police Athletic League (PAL) building, 700 N. Solano Drive.

The A in PAL will soon change from Athletic to Activities, Hechler said, as police officers and other volunteers coach and mentor local youth in sports and other activities.

He also encouraged community members to “get involved” with LCPD and its outreach programs and efforts to serve and protect the community.

“If you want to see a change in the community,” apply to the Las Cruces Police Academy, Rodriguez said.