Recognize the service, remember the debts 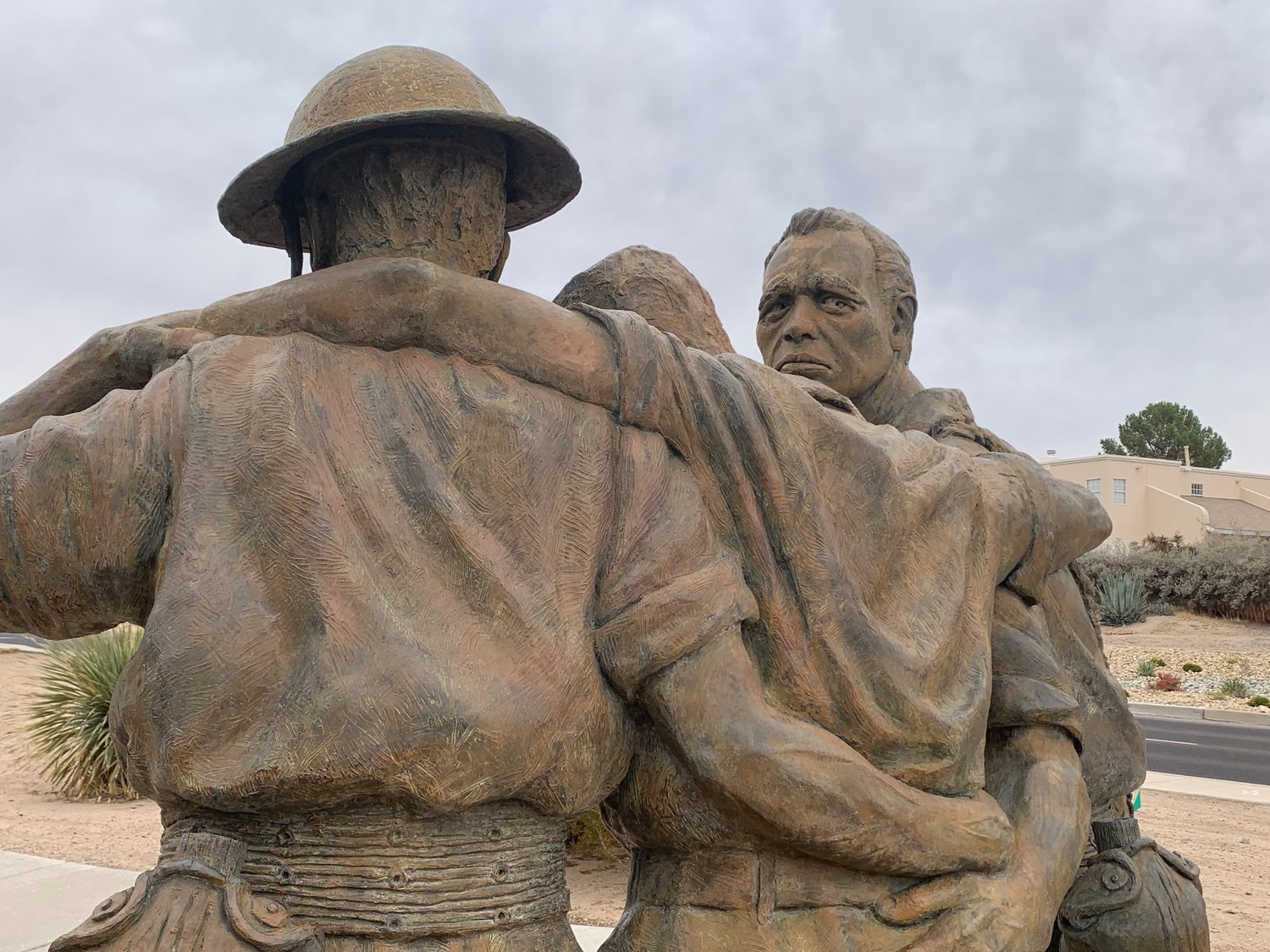 On Bataan, a jungle peninsula on the island of Luzon, was a place where cornered Allied troops fought a last-ditch action and surrendered after the Japanese invaded the Philippines. The "Bataan Death March" of March 1942 claimed 11,000 lives from sickness, thirst, and summary executions by bayonet. At Las Cruces Veterans Park, 1721 N. Roadrunner Parkway, these three veterans live on in bronze, created by Kelley S. Hestir, in memory of that horrendous march. This memorial, “Heroes of Bataan,” and others located in Veterans Park remember and honor those both living and dead who have served America though its beginning and are recognized each year on Veteran’s Day, Nov. 11.
Photo by Elva K. Österreich
Posted Thursday, November 11, 2021 11:02 am
By Richard Coltharp

How do you compare a Marine who stormed the beaches of Normandy on D-Day in 1944 to an airman who controlled air traffic at White Sands Missile Range yesterday?

There are probably dozens of answers to that question.

To my mind, though, those answers boil down to two:

I tend to lean toward Answer No. 2.

In many senses, when someone takes on a military assignment, their fate finds them. If a military member draws a job that seems less “important” than another one, that’s a perception issue. As do most endeavors, a military mission has many aspects. What may seem inconsequential on its face can have important consequences when placed in context.

We recognize Veterans Day each Nov. 11, commemorating the original Armistice Day, which ended World War I (then known as the Great War), on the 11th hour of the 11th day of the 11th month of 1918, more than 100 years ago.

Military service changed in America in 1973, when Congress did not extend the draft, creating a volunteer force. Before that, luck had a bigger role in members’ assignments. Today, volunteers have a voice in determining their branch of service, and what fields they want to pursue.

For generations, because of the draft, nearly all American men served for at least a couple of years in the military. Don’t take this as a call to bring back the draft, but I think our nation has lost something with the loss of the shared experience of military service. The training taught skills, and provided a common ground of discipline, helping generate a sense of being part of something bigger.

That said, the all-volunteer military has worked far better than most people could have imagined nearly 50 years ago. The way the military has adopted technology, and the training required to use that technology, have given generations of men and women skills they can use in the civilian world long after their service has ended.

Our society puts a high value on big, bold acts of bravery. In the field of battle, those acts can turn the tide of war, which can change the fate of history.

The smaller, quieter acts of military service can also turn the tide and change history.

We recognize the work of the Navajo code talkers in World War II, efforts that required focus and solitude over loud sudden movements. More overlooked is the work of the U.S. Coast Guard, the frequently forgotten fifth branch of military service.

Regardless of the nature of service, we Americans do a better job of appreciating our men and women in uniform than we once did.

One of the darkest periods in American history was the vile reception so many soldiers and sailors got when they came home from fighting in Vietnam. We’ve heard the tales of Marines being spat upon during parades, of airmen being booed and hissed.

Those responses are particularly galling when you recall the draft was in full swing during Vietnam, and most of those military members had no choice but to be there. On top of that, draftees were disproportionately poor, and people of color, without the means to gain a deferment for college, or the ability to sway political protection.

During the first two world wars, the refrain was, “When Johnny comes marching home again, Hoo-rah!”

The veterans of Vietnam were not hoo-rahed when they marched home. Korean vets were not as blatantly reviled, but were in many cases quietly ignored. The military actions in Southeast Asia were hard for the general public to understand. Things were not as clear-cut as they were in World War II, when everyone knew about Pearl Harbor, and the atrocities of Hitler’s Nazis.

Today we’ve come full circle with our championing of our veterans, but they need our attention and support in different ways now.

In the last 20 years, more servicemen and women have died by suicide than in military actions. The suicides outnumber the battle casualties by more than 4 to 1.

It is right and just to praise and honor the service of our military members, especially around Veterans Day. We need to follow up that praise with understanding and actions to help and support them after their service.

In New Mexico, our veteran suicide rates are even higher than the national average. If you know a veteran who could use assistance, keep these numbers handy for the state’s Veteran Crisis Line. Call 800-273-8255 or text 838255.