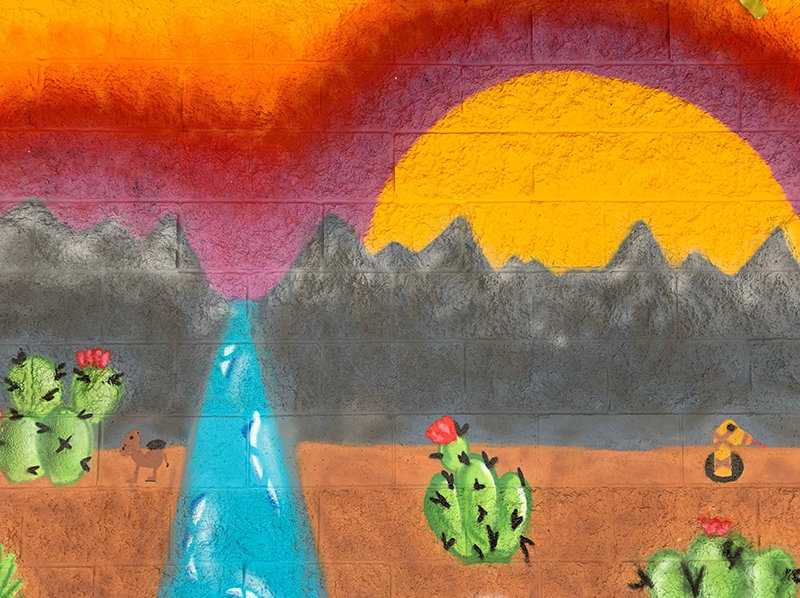 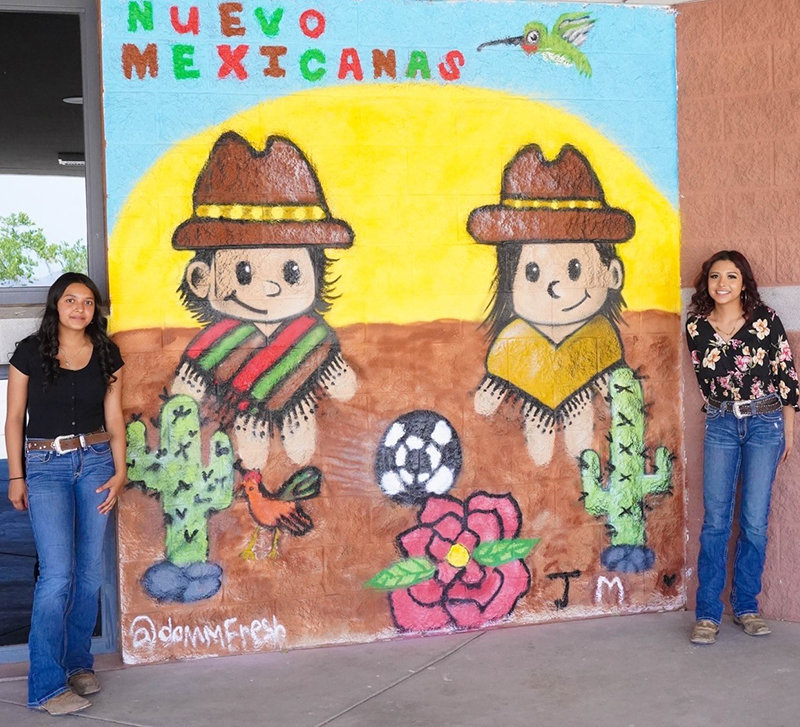 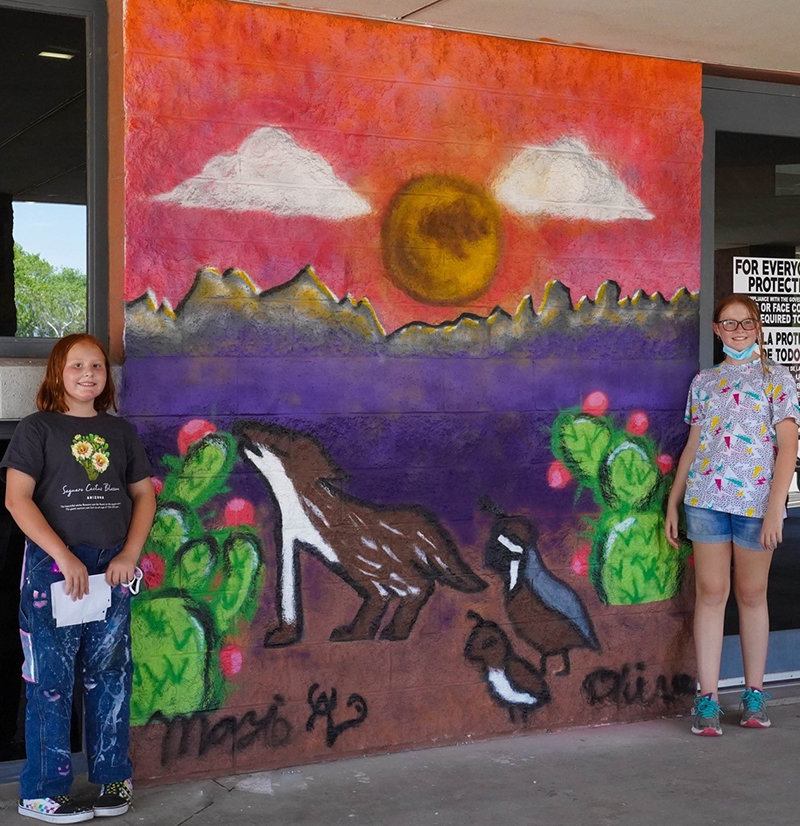 “Full Moon Over the Organ Mountains” is the mural painted by sisters Olive Japel, left, and Mazie Japel.
Courtesy photos by Adrienne Acosta 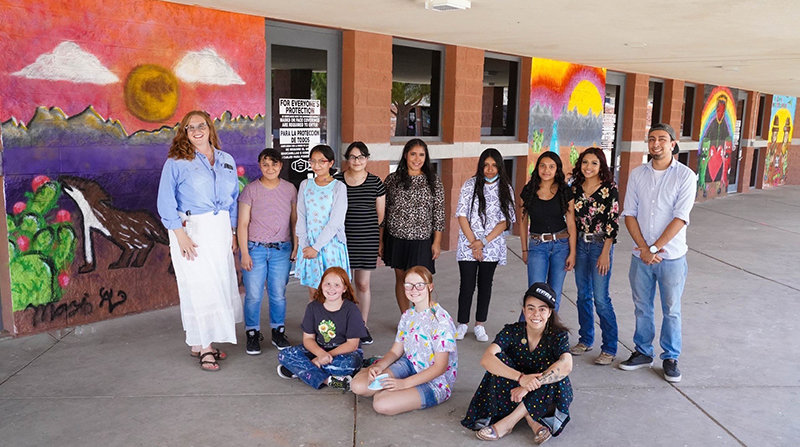 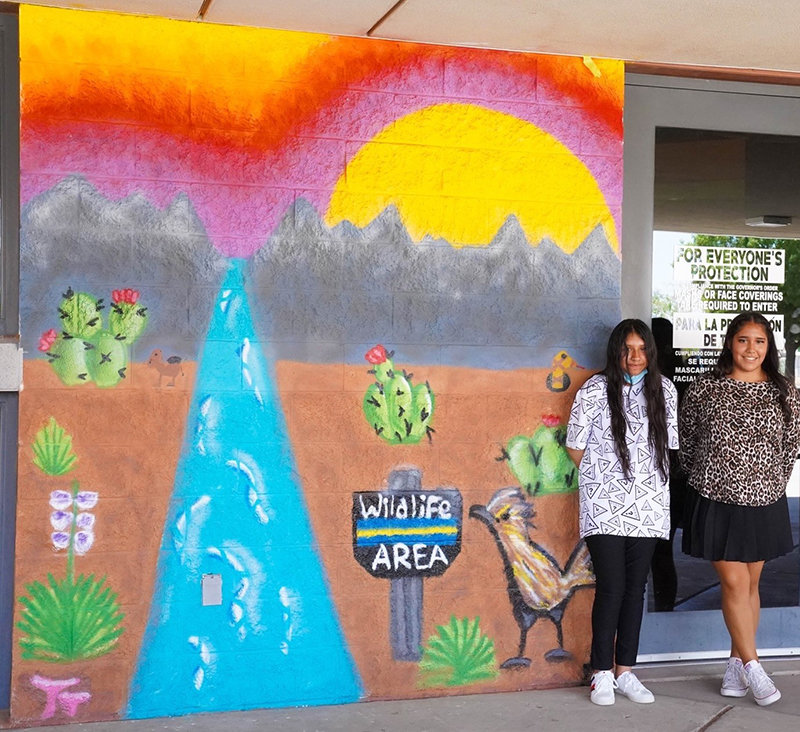 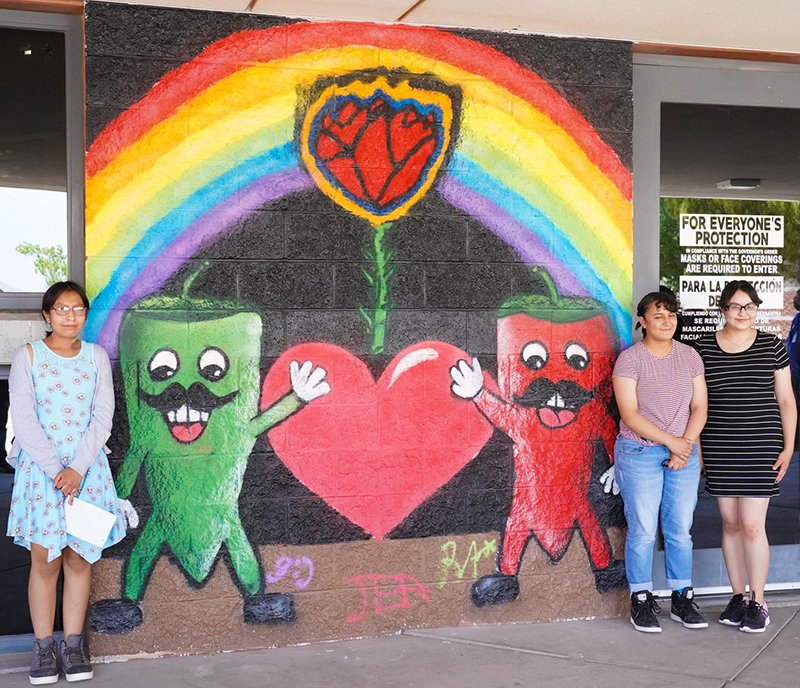 “The Happiness of New Mexico and Our Creativity” was painted by left to right, mural artists and sisters Reyna Arias, Jessica Arias and Gabriela Arias.
Courtesy photos by Adrienne Acosta
Previous Next
Posted Wednesday, June 23, 2021 12:03 pm
By Mike Cook

Oñate High School (OHS) is changing its name to Organ Mountain High School (OMHS) this summer, and four murals at the school were unveiled earlier this month as part of that rebranding.

Student artists “worked with mural artists from Cruces Creatives (a nonprofit makerspace), who taught them about the history of public art and showed us the process of mural-making from start to finish,” said high-school teacher Stefanie Japel, Ph.D., who led the mural project.

“Each student was given her own sketchbook, and they spent time writing and drawing each day,” Japel said. “Students were given the freedom to create their own murals from start to finish. The imagery they chose represents the beautiful landscape around us, our cultural heritage as New Mexicans and some deep symbology about bravery, strength, and what it is to be (New) Mexican.”

“This was a hard decision to make, but we did not want to go back,” LCPS board member Maria Flores said after the vote. “We knew that this change was hard for some. We needed to move forward to allow the healing to begin, requested by Mr. (Jim) Schapekahm, the principal. The goal was to move away from a violent history, to decolonize our school and make it culturally appropriate.”

Don Juan de Oñate (1550-1626), for whom the high school was originally named, was the first Spanish governor of New Mexico (1598-1606). An explorer and conquistador, he led colonists north from Mexico into what would become the state of New Mexico in 1598, establishing the first European settlements in the Southwest. Oñate is remembered for the Acoma Pueblo Massacre of 1599 in which an estimated 800 to 1,000 Acoma were killed. He also had Acoma warriors punished by cutting off part of one foot and putting them in servitude. The Spanish government found Oñate guilty of using excessive force against the Acomas.

Originally located at Sierra Middle School beginning in 1988, Oñate High School moved into its own building at 5700 Mesa Grande Drive in 1993.

Here is what student muralists from the soon-to-be-renamed school said about their work on the murals: