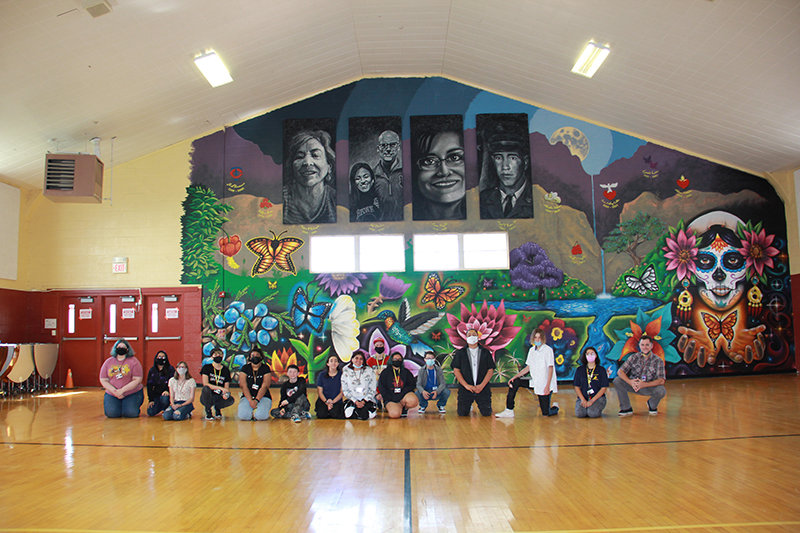 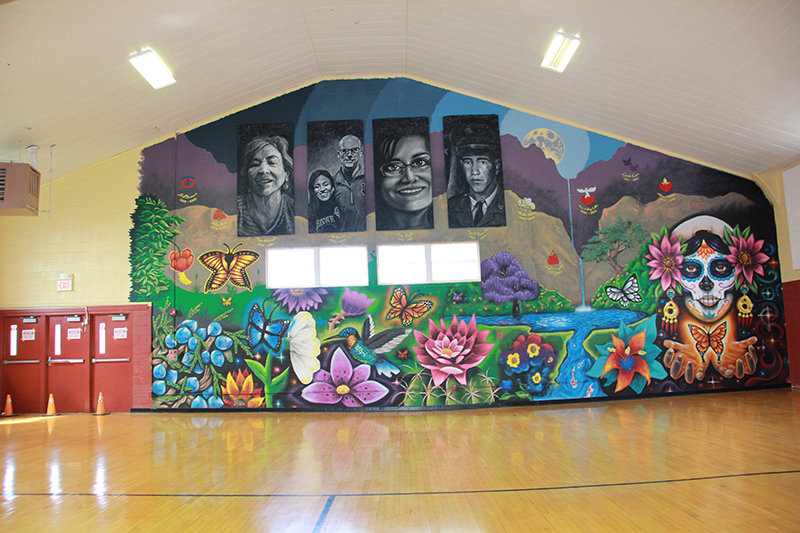 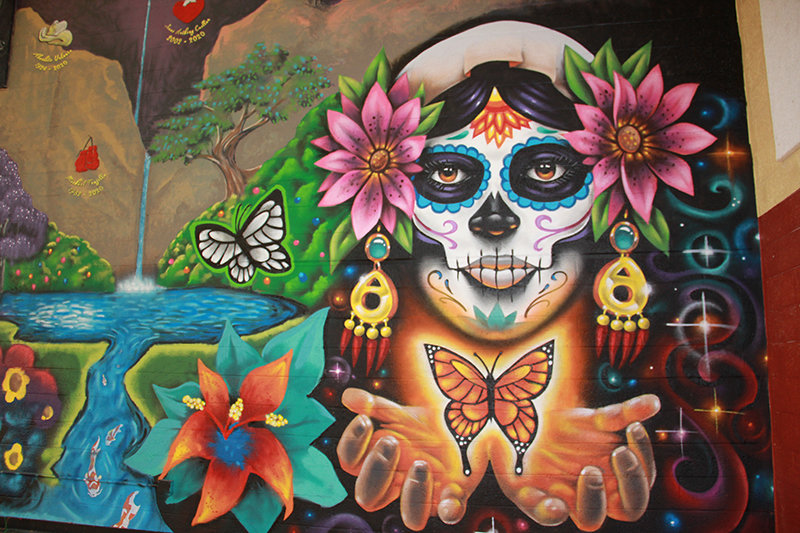 At Rio Grande Preparatory Institute, students get an alternative approach to a traditional high school setting. With smaller classroom sizes, students benefit from the extra one-on-one time with their teachers. Staff and educators at RGPI provide each student with the best opportunity for success. RGPI is a place where students go to focus and excel to earn the credits needed to complete high school. While students receive academic support, they are also encouraged to think outside of the box to tap into their creativity. That is exactly what they did during extended learning time (ELT) over the summer.

Walking into the gymnasium at RGPI, you will find a wall dedicated to those of Las Cruces that have lived their life in service to their community. They are the loved ones who have passed away, but not without leaving their mark. Students used a full range of colors to ensure the lives lost will never go forgotten in form of a mural that proudly represents their legacy in Doña Ana County.

The mural features the landscape and characteristics of the borderland, along with the majestic Organ Mountains, a grandeur waterfall, a juniper bush, and splashes of every color to bring to life the serene beauty of the Southwest. To capture the culture and heritage of families who live in Village of Mesilla, in honor of Día de los Muertos, a calavera skull was included in the display.

In black and white, you will find the faces of the leaders from Las Cruces Public Schools who served the district with distinction, encouraging students to reach their highest potential. Of those are Maggie R. Rodriguez, the loving mother of RGPI Principal Rebecca Rodriguez, Jed Hendee, a long time principal of LCHS from 2011 to 2018 and, prior to that, of Zia Middle School since 2007. Hendee is pictured with his wife, Susie Hendee current principal of Centennial High School. The next portrait is of the late Superintendent of Las Cruces Public Schools, Dr. Karen M. Trujillo, a lifelong educator who proudly served her community and advocated for students and their teachers throughout her career as a teacher, researcher, principal, Secretary of Education, and superintendent. Next to Dr. Trujillo is Angel Barrio, a brave soldier who in his lifetime proudly served his country. Barrio is the father of Venesa Clark who currently works in registrar’s office at RGPI.

Christopher Bardey, an Art and Career and Technical Education (CTE) teacher – led this project and helped bring in local talent Cameron Vigil, an artist that specializes in apparel, screen-print, tattoos and murals all over the city. Vigil worked closely with students, many who had never worked with spray paint or visual art on a large scale before. Students had a total of ten days during ELT to come up with a design and capture that visual for display.

There were 15 students split into two groups, each group had only five days to work on the mural. Mr. Bardey brought in skilled painter Lorenzo Zepeda, another local artist that had worked with the city of Las Cruces as the local art coordinator; he helped Mr. Bardey and the students map out the backdrop for the mural and the portraits that pay homage to the lives lost. Chris Preciado-Shelton, a local media and graphic designer was also invited to share his expertise with students.

“We’re always grasping for things that help unite us as a community and as a school,” said Bardey. “I saw this as a way to help us as a group, even in the broader community of Mesilla, feel like we’re helping each other to heal over the last couple of years since they’ve been so traumatic.”

Wearing respirators, students got comfortable learning a new technique, utilizing spray paint, and letting their creativity guide them to a remarkable completion. The names on the mural are to commemorate loved ones lost since 2019. Their names and life dates are on display along with a representative image of the person or a symbol to personalize the touching tribute. Some of the students who worked on the project had families members commemorated on the wall of healing.

“One thing that had a big impact on me and my family is the names of the people we had lost and each symbol that represented them,” said Alex Delgado a junior at RGPI. Alex had the opportunity to add the name of his late great-grandfather Valente Miramontes who came to the United States to work in the historic Bracero Program. Alex incorporated a cowboy hat to honor his late great-grandfather.

There was a dedication ceremony at RGPI during an Open House on August 25, where members of the community were welcome to join parents in the unveiling of the wall of healing.