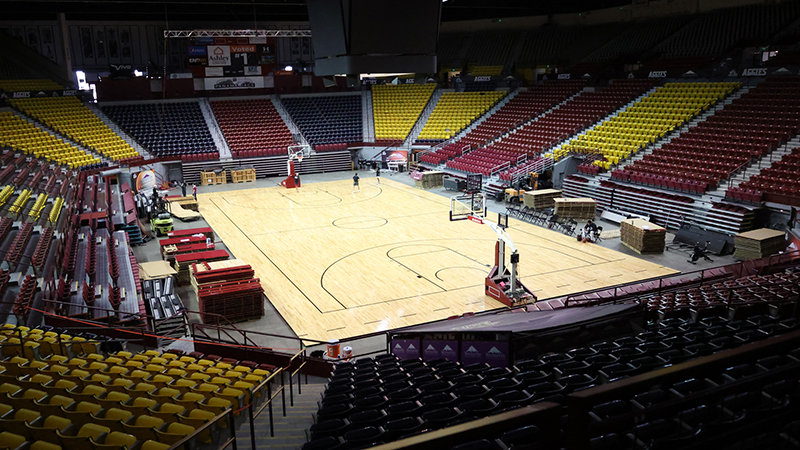 Due to structural issues with the existing floor inside the Pan American Center, NM State athletics announced Monday afternoon that a new court will serve as the playing surface for the Aggies' men's basketball, volleyball and women's basketball teams for the remainder of the 2021-22 season.

In early July of 2021, NM State athletics revealed a new look for the existing playing surface inside the Pan American Center. The updates to the look of the iconic parquet floor inside the Aggies' home were cosmetic in nature and no part of the actual floor was removed or revamped.

Installation of the rental floor inside the Aggies' home started last Tuesday (Oct. 5) and wrapped up Thursday (Oct. 7). Following the conclusion of the 2021-22 seasons, a new floor will be purchased and installed inside the Pan American Center.

In all, a total of three parquet-style floors were used as playing surfaces inside the Aggies' home. The most recent one was installed ahead of the 2011-12 season, replacing the previous one which made its debut during the 1986-87 season. The Pan American Center's original parquet floor graced the facility from its opening in 1968 until flooding damaged it in 1986, necessitating the installation of a new playing surface.

For all news and updates on NM State athletics throughout the 2021-22 academic year and beyond, visit NMStateSports.com - the official home of Aggie athletics - and follow the Aggies on Facebook (NM State Aggies), Twitter (@NMStateAggies) and Instagram (@NMStateAggies).