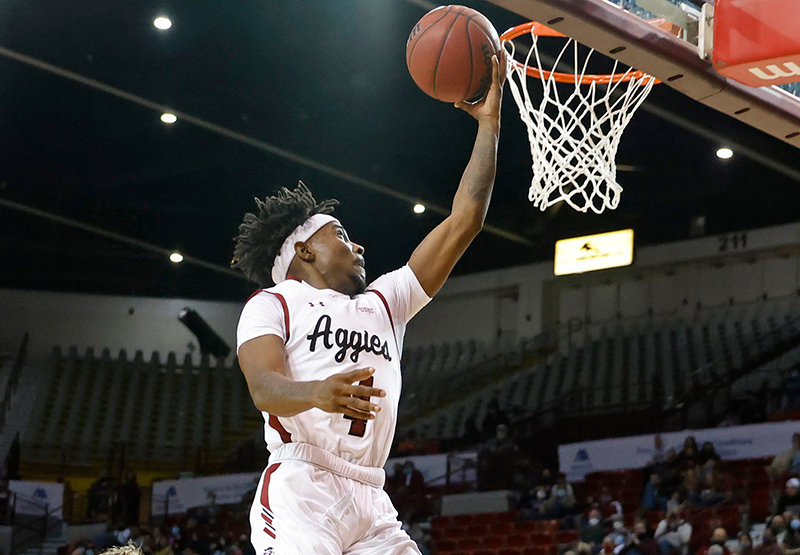 OPENING TIPS• One of the oldest rivalries in the history of NM State men's basketball reignites Saturday night inside the Pan American Center as NM State and UTEP battle for the first time since 2019. Tip-off is set for 7:00 p.m.• NM State fans around the nation can tune in to the action as the 219th installment of the all-time showdown between the Aggies and Miners is set to be streamed on ESPN+ and the ESPN app. Over the airwaves, Comcast New Mexico will televise each and every second of the action.• The play-by-play and analysis combo of Adam Young and Rus Bradburd are set to narrate the action on both the linear TV network and the ESPN+ stream. Over the airwaves, in lieu legendary radio play-by-play man Jack Nixon who will be in Alabama with the Aggies' football team, Tim Hagerty will set up shop courtside to call the action.• Hagerty's play-by-play and analysis can be heard on 99.5 Zia Country FM in Las Cruces, N.M., and nationwide on The Varsity Network app.• Affiliate stations of the Aggie Sports Network can be tuned in to in Artesia, N.M. (990 AM), Carlsbad, N.M. (1240 AM), Gallup, N.M. (94.9 FM), Alamogordo, N.M. (103.7 FM) and El Paso, Texas (1380 AM). All of those stations will also carry Nixon's commentary of Tuesday night's tilt.• Tickets for Saturday night's clash can be purchased ahead of tip-off at both the Pan American Center Ticket Office or online. Ticket specials for Saturday night's game include $10 upper-level seats for Memorial Medical Center employees. Those tickets must be purchased prior to gameday.• All tickets in section 119 of the Pan American Center will be available for $10 on the day of the game.

NM STATE vs. UTEP | SERIES HISTORY & TIDBITS• The second-lengthiest series in the history of the program behind their one against in-state rival New Mexico, the Aggies have battled UTEP 218 times dating back to 1915. On November 12, 2019, the Aggies saw their nine-game winning streak against the Miners get snapped after UTEP claimed a 65-50 victory inside the Don Hawkins Center.• Only two events - World War II and the COVID-19 pandemic - have prevented NM State and UTEP from meeting on annual basis since 1923. By failing to play last season, it marked the first time since 1944 in which the Aggies and Miners didn't duke it out on the hardwood.• The Aggies' longest winning streak in the all-time series came between 1932 and 1940 when they won 20-straight over UTEP.• NM State's nine-game winning streak headed into the 2019-20 campaign was its third-longest in the history of the series and heading into Saturday's tilt the Aggies have won nine of thelast 10 and 13 of the last 15 matchups between the two programs. Three of the Aggies' last nine wins have come by 20 points or more.• NM State bench boss Chris Jans is 5-1 (.800) against UTEP during his tenure in Las Cruces.• The Miners are just one of a multitude of current Conference USA squads the Aggies have done battle with in the history of men's basketball at NM State. All-time, the Aggies hold a 172-133 (.564) winning percentage against current C-USA programs and are above the .500 mark against each team from that league they have played with the exception of Charlotte (0-1) and Southern Miss (1-9).• A little over 10-percent (10.6-percent) of NM State's 1,618 program wins have come at the hands of current C-USA institutions.

LAST TIME OUT vs. UTEP | NM State 59, UTEP 56 | Tuesday, Dec. 3, 2019• Although the converted just one field goal in the final 6:03, the Aggies made use of stout defense and timely free throw shooting to claim a 59-56 victory over UTEP inside the Pan American Center.• C.J. Bobbitt scored six of the last seven points for NM State and wound up finishing with a team-high 14 points in his team's triumph over the Miners.• UTEP had a glimmer of hope late, but misfired on a pair of game-tying attempts from three-point land in the final six seconds of action.• The Miners manufactured a pair of early five-point leads, the last of which came when Nigel Hawkins converted a fast break layup to make matters 13-8 with 9:47 to go in the opening stanza.• NM State answered that fast-break score with a 17-5 run through the next 7:31 to secure the lead for the remainder of the game.• One of the biggest factors in NM State's win was the effectiveness of its reserves. The Aggies' bench amassed 25 points while the Miners' reserves contributed only four points to their squad's cause.• NM State held a 36-28 (+8) edge on the glass to help win the day as well.• The victory pushed NM State head coach Chris Jans' record against UTEP to 5-1.• Of the 18 players who took part in this game, only five remain on the respective rosters and are available to play for NM State and UTEP ahead of Saturday night's clash. For the Aggies, that group consists of Johnny McCants, Will McNair and Jabari Rice while the Miners' twosome of Souley Boum and Tydus Verhoeven return.

LAST TIME OUT | NM State 62, UC Irvine 51 | Tuesday, Nov. 9, 2021• A men's basketball game occurred in the Pan American Center for the first tine in 19 months and as is usually the case NM State wound up on top. In the Aggies' 2021-22 season opener, NM State used double-digit scoring performances from five players along with an 11-3 run through the final 5:08 to claim a 62-51 victory over UC Irvine.• Six players made their NM State debut and in all seven Aggies played their first games inside the Pan American Center. Teddy Allen finished with a game-high 14 points while Jabari Rice and Pan Am Center first-timer Mario McKinney Jr., pumped in 12 apiece.• Donnie Tillman added 10 points as did Will McNair Jr., who got the second start of his career and responded by putting up 10 points, eight rebounds, two assists and two blocked shots in 26 minutes of action.• Johnny McCants' scoring total was just four, but his presence was felt in a major was elsewhere. The Las Cruces, N.M., product generated a game-best eight rebounds and added a career-high four blocked shots.• UC Irvine led 2-0 early, but that was the only advantage the Anteaters enjoyed through the 40-minute bout.• With the win, NM State moved to 2-0 in the Chris Jans coaching era against UC Irvine and also won its season opener once again under Jans. NM State's bench boss is a perfect 5-0 in season openers while leading the Aggies.• UC Irvine's 51 points marked the ninth time in Jans' tenure that the Aggies limited a Division I foe to 52 points or less.

UNPACKING THE OPENER• NM State moved to 71-42-1 all-time in season openers with Tuesday night's 62-51 win over UC Irvine.• The 51 points scored by UC Irvine represented the lowest point total by an NCAA Division I opponent against NM State in a season opener in program history. Both times the Aggies have opened a season against NCAA Division I competition under Jans, they have limited the opposition to fewer than 60 points.• The Aggies went 15-of-16 from the free throw line in Tuesday night's victory, good for an accuracy rate of 93.8-percent. That's the second-best single-game free throw shooting percentage in Chris Jans' tenure at NM State. The only performance from the line that bettered that under Jans came Feb. 27 at Grand Canyon where NM State went a perfect 10-of-10 from the charity stripe in their WAC win over the Lopes.

SCOUTING UTEP | ROSTER | SCHEDULE | STATISTICS• Joe Golding remained in the Lone Star State to coach basketball, but he traveled to its westernmost point this summer by accepting the job as UTEP's head coach on April 13, 2021. Golding spent his first 10 seasons as a head coach at Southland Conference program Abilene Christian, notable leading the Wildcats to two NCAA Tournament appearances and an upset of third-seeded Texas in the opening round of last season's Big Dance.• Golding and the Miners won their opener against Western New Mexico by an 85-57 tally Tuesday night and they'll look to string together back-to-back wins for the first time in Golding's tenure in El Paso Saturday night against the Aggies.• Much of the focus on opponent scouting reports will go to stopping high-scoring guard Jamal Bieniemy. After transferring in from Oklahoma, the New Orleans, La., product debuted for UTEP last season and averaged 8.6 points and 4.0 assists per game for the Miners' 12-12 club.• Bieniemy pumped in a game-high 23 points in his team's season-opening win over Western New Mexico Tuesday night while Keonte Kennedy added 11 on 3-of-11 shooting to begin his second season of affiliation with UTEP.• One of the biggest missing pieces for the Miners Tuesday night was Souley Boum who suffered a hand injury in October. There's a strong chance the Miners will get their Preseason All-C-USA selection back for Saturday night's showdown inside the Pan American Center. Last season, Boum topped the Miners' scoring charts at 18.8 points per game.• Saturday night marks the first regular-season tilt between Golding and NM State head coach Chris Jans. Prior to the start of the 2019-20 season, Golding and Abilene Christian duked it out with NM State in a closed scrimmage.• While Golding does not have any non-scrimmage, head-to-head experience against Jans, he has coached against a pair of current NM State players. While at Abilene Christian, Golding and the Wildcats were on the wrong end of a 72-58 result against UNLV and Donnie Tillman on Nov. 18, 2019. Last season, Golding's troops at Abilene Christian posted an 80-72 victory over Austin Peay and Mike Peake on Nov. 27, 2020.

THIS DATE IN NM STATE HISTORY• For the second time in his tenure as the Aggies' head coach, Chris Jans will coach a game on November 13.• In Jans' first game on Nov. 13 as NM State's leader, the Aggies dropped a 92-74 decision at #21/22 St. Mary's in 2017.• NM State is 2-3 all-time on this date with their first-ever game on November 13 coming in 1998 against UTEP. That season, under the direction of legendary head coach Lou Henson, the Aggies secured a 59-57 victory over the Miners at the Don Haskins Center.• Each time the Aggies have won a game on Nov. 13, they have gone on to secure conference regular-season titles and spots in postseason tournaments (NCAA in 1998-99, NIT in 2015-16).

COMING UP NEXT• For their first road trip of the 2021-22 campaign, the Aggies head to South Carolina as one of eight teams who are set to take part in the 2021 Myrtle Beach Invitational. In addition to NM State, Davidson, East Carolina, Indiana State, Oklahoma, Old Dominion, Penn and Utah State will be making the trip to Conway, S.C., for the invitational. NM State's opening game in the Myrtle Beach Invitational comes Thursday at 10:00 a.m. MT when they duke it out with A-10 power Davidson inside the HTC Center. The second meeting between the Aggies and Wildcats will be televised nationwide on ESPNU.