The wait is over – NMSU vs. UTEP this weekend 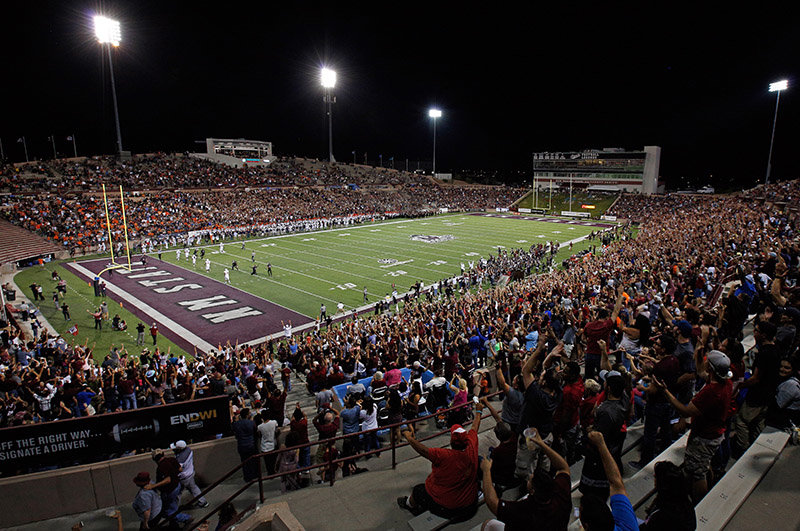 The Aggies will open their 2021 season Saturday, Aug. 28, against archrival UTEP at Aggie Memorial Stadium. Kickoff is at 7:30 p.m.
Courtesy photo 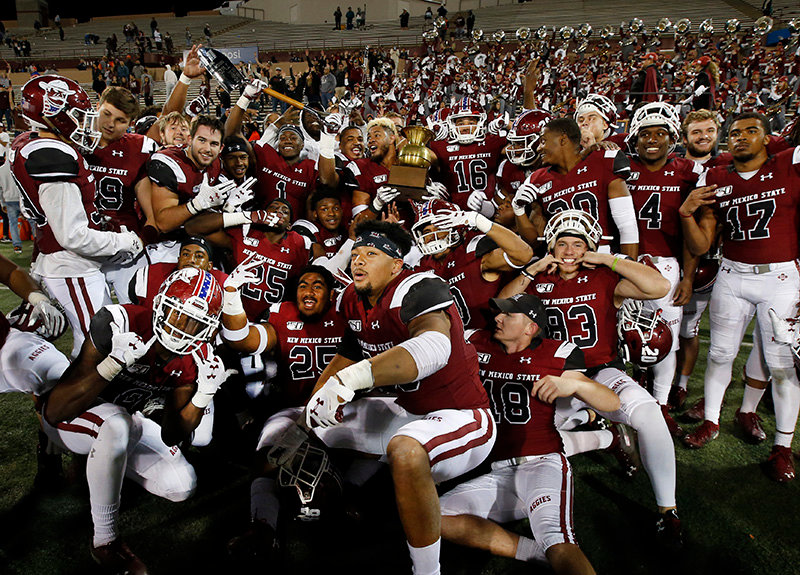 The Aggies’ celebrate their 2019 win over the Miners. Saturday’s game will be the 98th meeting between the schools, dating back to 1914.
Courtesy photo 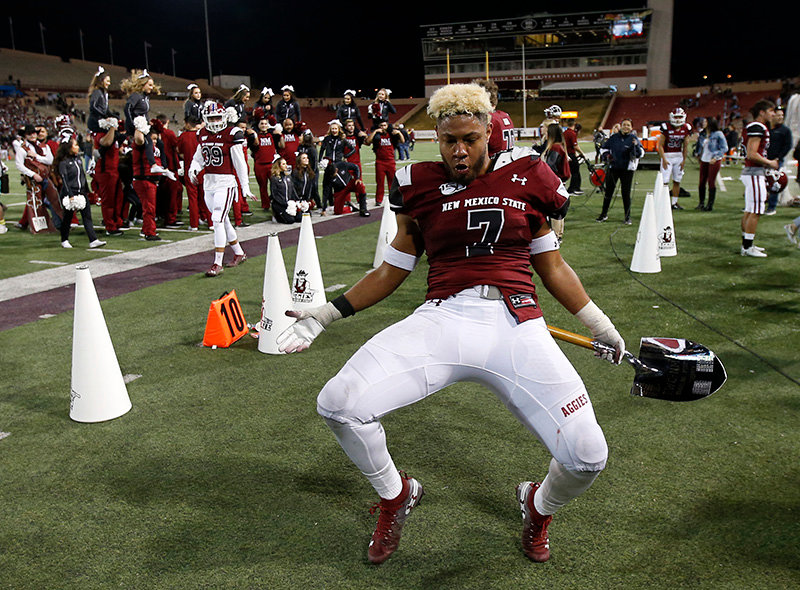 Javahn Ferguson celebrates the Aggies’ 2019 win over the Miners. Saturday’s game will be the 98th meeting between the schools, dating back to 1914.
Courtesy photo
Previous Next
Posted Thursday, August 26, 2021 11:42 am
By Dave Burge

Like a prisoner marking off the days on the calendar, New Mexico State University football players, coaches and fans have been waiting for this weekend for months.

The long wait – after nearly two years without meaningful games -- is finally over on Saturday, Aug. 28. The Aggies will open their 2021 season against archrival UTEP at Aggie Memorial Stadium. Kickoff is at 7:30 p.m.

“I think it is a good way to start the season,” NMSU coach Doug Martin said. “All summer long, it is what our players have pointed to, opening up with a rivalry game.

“It focuses them a lot more,” Martin added. “For the fans, it creates a lot more excitement and a lot of buzz and obviously, that game is always well-attended on both sides, whether down in El Paso or here.”

NMSU was one of just two FBS (Football Bowl Subdivision) teams to have their entire fall season canceled last year because of the Covid-19 pandemic. The Aggies did play two spring games but treated those games more as scrimmages and as a way to get in more practice time under NCAA rules.

Defensive coordinator Frank Spaziani said facing UTEP has given Aggie players extra motivation and a bit of an emotional edge to their preparations.

“It is a great motivator, and it is great we open up with them,” said the former Boston College head coach. “Our guys haven’t played in a real game – you count the days – in two seasons. Having that motivation -- the team right down the road they know about -- it should help them mentally get their attention.”

Quarterback Weston Eget, who has been competing for the starting job with Jonah Johnson and is expected to see lots of action this year, said the team is pumped to play UTEP.

Eget also says players are super pumped to play in front of fans again for the first two in nearly two years.

“We are all super excited,” said the redshirt freshman from Santa Clarita, California. “It will be electric. We are super excited to play in front of fans. Last time, obviously there was no one in the crowd (during the spring games at the Sun Bowl), so it was a bit weird.”

Running back O’Maury Samuels, a redshirt junior transfer from Michigan and a native of Los Lunas, said facing a rival like UTEP is a great way to get the season rolling.

“It’s a rivalry game,” said Samuels, who hasn’t played in three years because of losing a year to NCAA transfer rules and the pandemic. “We have to start the season off right and get this thing on a good pace.”

NMSU and UTEP have been playing each other almost every year since 1914 and Saturday will be their 98th meeting. UTEP holds an all-time series edge of 57-38-2. Games were not held during World War I and II and last year during the pandemic.

The Aggies have won the last three meetings.

To add to the fun and festivities, NMSU will have a free Fan Fiesta starting at 3:30 p.m. on Saturday in the south Pan Am parking lot. It will feature luchador wrestling, games, giveaways, a live DJ and performances by mariachi bands.

Masks are not required at Aggie Memorial Stadium, because the game is outdoors. If you are going to the Fulton Center for any kind of special events before or after the game, you will be required to wear a mask.

Martin and his players have a message they want to get out to Las Cruces before the start of their season.

“This sets up a really nice home schedule,” Martin said. “We are going to need the fans behind us. Our players have been off for a long time. They are looking forward to playing in front of a large crowd. I think (fans) will be excited about watching our team play.”

Junior wide receiver Dominic Gicinto, a transfer from Missouri, has never played a home game for the Aggies, but can’t wait to strap on his helmet and take on the Miners of UTEP.

“I haven’t experienced a game here at New Mexico State, but I think every team is better with more fans,” Gicinto said. “We are ready.”

And so are the fans.

And if you can’t make it out to see the game in person, KVIA ABC-7 announced that it will broadcast the season opener and it will air the Aggies’ other four home games on its sister channel, the CW El Paso/Las Cruces.