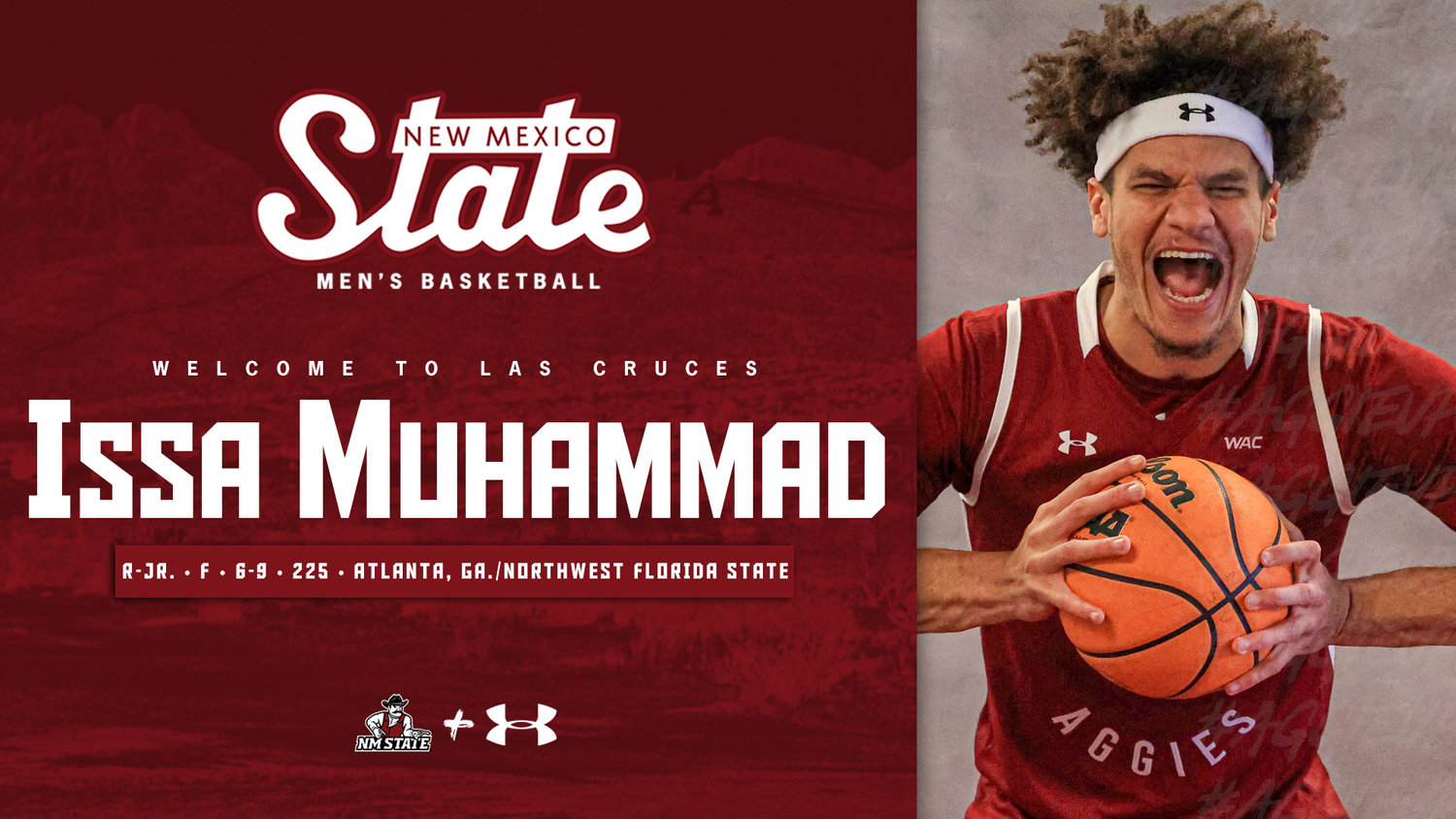 LAS CRUCES, N.M. - Another top-30 junior college player is bound for the City of Crosses.

In an announcement made Wednesday by NM State head men's basketball coach Greg Heiar, forward Issa Muhammad has put pen to paper on his National Letter of Intent to suit up for the Aggies beginning in 2022-23.

Issa Muhammad | F | R-Jr. | 6-9 | 225 | Atlanta, Ga./Norcross HS/Daytona State College (stats)/Northwest Florida State College (stats) | Highlights (March 2022) | Highlights (July 2021)• One of Heiar's frontcourt stars at Northwest Florida State College in 2021-22, helped the Raiders ascend to the pinnacle of junior college basketball by leading them to the NJCAA Division I National Championship.• A force in the paint, averaged 9.8 points, 6.4 rebounds, 0.8 assists and 0.8 blocked shots through the Raiders' 36-game slate. Muhammad generated shooting splits of .511/.231/.610 through his sole season in a Northwest FloridaState uniform. For his efforts throughout the regular season, Muhammad locked on to All-Panhandle Conference Second Team honors prior to securing FCSAA/NJCAA Region 8 All-Tournament Team accolades.• Posted 18 outings of 10 or more points, a pair of 20+ point outings and six double-doubles on the year.• Catapulted the Raiders into the NJCAA Division I National Championship game with an 18-point, 12-rebound double-double during his team's national semifinal win over Triton College (March 18).• Prior to his days at Northwest Florida State, suited up for another Florida College System Activities Association (FCSAA) institution in Daytona State College.• A two-year fixture for Daytona State (2019-20 and 2020-21), started 16 of the Falcons' 19 contests in 2020-21 and posted averages of 15.9 points, 11.1 rebounds and 1.7 blocked shots per game en route to All-Central Conference First Team honors.• Through the 2019-20 season, started 26 of the 30 games he took part in and averaged 9.1 points, 6.4 rebounds and 1.4 assists per game.• Following his national championship season with Northwest Florida State, received offers from the likes of West Virginia and Coastal Carolina in addition to looks from Cincinnati and Wichita State among others.• Upon concluding his prep career was rated as a three-star recruit by 247Sports and collected offers from Clemson, Florida, Georgia Tech as well as Iowa State before electing to go the junior college route.

What they're saying about MuhammadNM State head coach Greg Heiar | "We are excited to announce the signing of Issa Muhammad. Issa comes with me from Northwest Florida State and was an integral part of us winning the national championship there last season. Simply put, he is a winner. He was one of the best big men in all of junior college basketball and sacrificed individual stats to do his part to help us win a championship. He is familiar with our style of play, terminology and the work ethic it takes to get better every day. His ability to rebound, score inside and out while playing above the rim is sure to be exciting to watch for Aggie Nation. He is somebody I really enjoyed being around everyday because of his positive competitive vibes. The sky is the limit for this young man. Don't be surprised if you're not watching him in the future this time of year on TV. He has that type of athletic ability, size and physicality all teams seek. In addition to that, Issa's high level skill set and unselfishness make him invaluable to our program. I'm so excited to run it back with Issa."

For complete coverage of NM State men's basketball as the Aggies continue to reload for the 2022-23 season, visit NMStateSports.com - the official home of Aggie athletics - and follow the Aggies on Facebook (NM State Men's Basketball), Twitter (@NMStateMBB) and Instagram (@NMStateMBB).