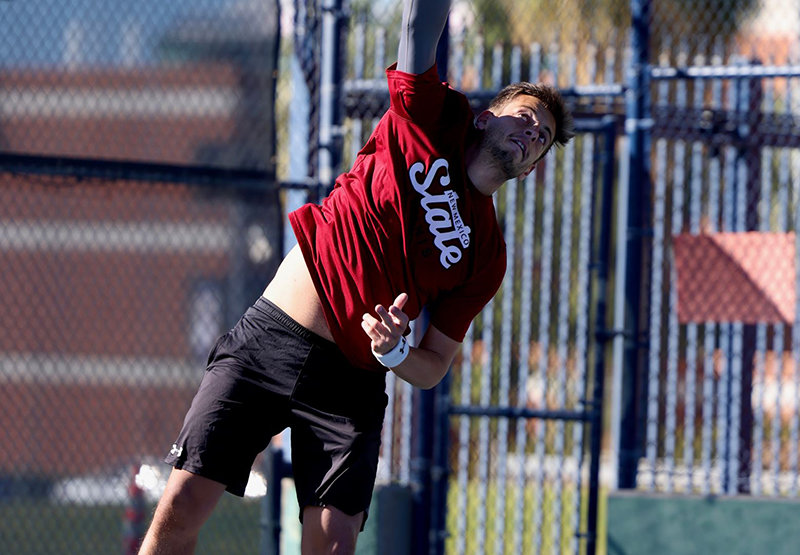 THE FIRST SERVE
• Western Athletic Conference play begins for the defending league champions this week as NM State is set to host a number of league teams for the opening weekend of conference play at the NM State Tennis Complex.
• The Aggies' first WAC matchup of 2022 pits them against UTRGV Friday morning at 9:00 a.m. Then, Sunday morning at 10:00 a.m., a rematch of the 2021 WAC Tournament championship match is on tap as NM State battles Grand Canyon.
• Senior Louis Menard has captured three consecutive singles wins, evening his 2022 one-on-one record at 5-5.
• Menard and Jordy Visser are tied for the team lead in doubles wins, having come up with a 7-6 showing in tandem play. Gijs Akkermans and Corey Clarke are also 7-6 in doubles action and have played on both line one and line two thus far.

THE SCHEDULE
• In all, seven league matches will take place at the NM State Tennis Complex this weekend. A complete schedule of action is below:

SCOUTING UTRGV | ROSTER | SCHEDULE | STATISTICS
• Two of the Vaqueros' three victories of 2022 came over the course of the last seven days, giving UTRGV some momentum heading into its first conference weekend of the season.
• UTRGV scored a 4-1 win over NJIT on Tuesday, March 15 at home, a victory which came just a few days after its 5-2 triumph over Southland Conference foe Nicholls in Lafayette, La., on Saturday, March 12.
• In singles play, the Vaqueros have gone a total of 18-58 throughout 2022 with Misha Kvantaliani (6-5) taking one-third of those victories. The Vaqueros' top-flight player won his last outing and is 6-4 through his last 10 tilts.
• Kvantaliani has teamed with George Hutchings in doubles action to give the Vaqueros one of their best options. That duo is 4-3 on line one, matching the mark put forth by the team's line three pairing of Chris Lawrance and Sam Whitehead.
• In all, UTRGV is 15-20 (.429) in doubles action through 2022.

SCOUTING GRAND CANYON | ROSTER | SCHEDULE | STATISTICS
• Each of the Lopes' two wins have come in the team's last four matches, including a narrow 4-3 victory at UC Riverside on Sunday, March 6.
• Grand Canyon has struggled slightly in doubles play early on, going a combined 5-27 (.156). Freddie Grant and Loic Van Zeggelaar have combined to produce two of those five wins and have a 2-7 mark.
• Singles play has gone much better for the Lopes as two players have records at or above the .500 mark. Leading the way there is Van Zeggelaar and his 5-3 showing on line five.
• Stanislas De Samucewicz has knocked out four opponents in 2022, leading to a 4-4 mark in his one-on-one tilts.

COMING UP NEXT
• League action continues for NM State as it travels to Beaumont, Texas, for another weekend of conference matchups. On the campus of Lamar University, NM State is slated to take on Chicago State (Friday, March 25) and Seattle U (Saturday, March 26).