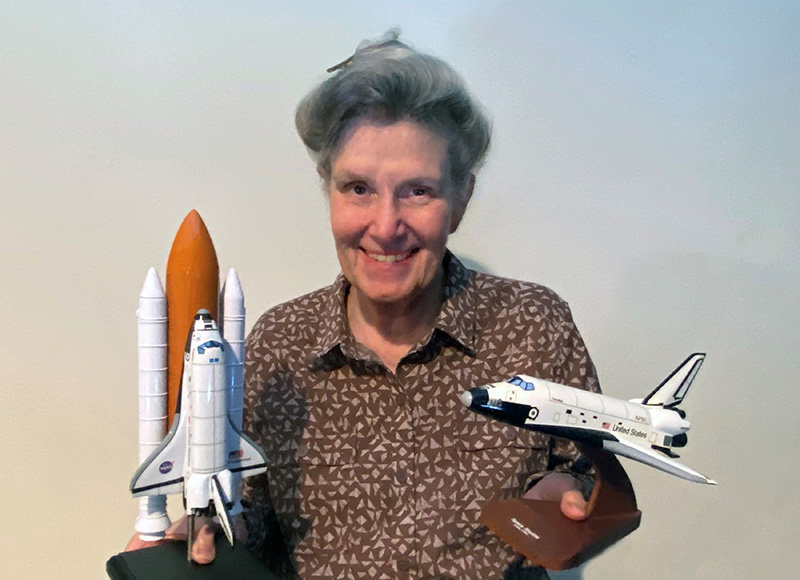 Anita Gale, CEO of National Space Society, will be the special guest at Wings n Wheels Fest 21 on Sept. 25.
Photo is courtesy of Anita Gale

One of the nation’s top space industry engineers will be a guest at Wings n Wheels Fest 21, which will be held 9 a.m.-4 p.m. Sat., Sept. 25, at Las Cruces International Airport (LCIA).

Anita Gale is the CEO of the National Space Society (NSS) and runs engineering design contests for high school students around the world. She worked on the Space Shuttle for almost the entire length of the program and then became a senior project engineer for space vehicle cargo integration for the Boeing Company. Gale served as chair of the American Institute of Aeronautics and Astronautics Space Colonization Technical Committee 2013-14; she holds three U.S. patents for space cargo interface standardization.

“Anita is a representative for our theme of Women in Aviation,” LCIA Administrator Andy Hume said. “She is also an exhibitor with the National Space Society and Space Settlement Development Competition.”

Gale lives in Nassau Bay, on the southeastern edge of Houston, Texas. She grew up in the Pacific Northwest “catching fishing, digging clams and picking berries,” and earned bachelor of science and master of science degrees in aeronautics and astronautics from the University of Washington (UW) in Seattle and a certificate in systems engineering from Cal Poly Pomona.

When Gale was attending UW, women made up fewer than one percent of all U.S. engineers.

“I didn’t tell my high school counselors I wanted to be an engineer because they would have discouraged me. Women weren’t in engineering,” she said. “To prove I deserved to be in the aerospace industry, I had to get stinking hot grades and graduate near the top of my class. In college I had to be one of the hotshots.”

Gale went to work for Rockwell International on the Space Shuttle program in 1980. She transitioned to Boeing when it took over the Space Shuttle contract and continued working on that NASA program at Johnson Space Center in Houston until her retirement in 2011.

In 1984, Gale cofounded Space Settlement Design Competitions (SSDC) and continues to conduct national and international contests for high school students “that involve writing the future history of human activities and development of infrastructure in space,” helping students design colonies in space; on the moon, Mars and asteroids; Earth orbit; and elsewhere in the solar system.

With the design competitions, “We’re a catalyst for getting kids interested in education,” Gale said.

Often during a competition, she has heard participating students say, “’Now I understand why I need to study math and science!’”

“With any luck, in 20 years, having a career in space will be normal,” she said. “Space is where humans can learn to cooperate.”

A design competition she coordinated in New Delhi, for example, found students from traditional enemies India and Pakistan working together on the same team.

“You get high school kids all wrapped up in this excitement of what can happen to mankind in their lifetime, she said.”

Earth’s moon is just one example. An industry could be built around processing lunar materials to make air and water and sell to people living on the moon, Gale said.

“We’re just right at the beginning of this big new economy,” she said. “The kids … get so into it. They get transported into this future reality and to them it is absolutely real.”

Gale said she is open to the idea of hosting a regional design competition in Las Cruces, which has close proximity to Spaceport America, White Sands Missile Range and other aerospace facilities.

NSS is “the organization where serious discussion of people living in space is happening,” Gale said. “We’re doing this for real and we need to prepare for it. There’s going to be a space economy. I want to look at the future of the space industry 20, 30, 40, 50 years from now. There are technologies we can start developing right now.”

There will be airplanes, helicopters, vintage and classic cars and hotrods on display during Wings n Wheels Fest 2021, along with dozens of aircraft and aerospace exhibitors, family-friendly activities and food trucks. One of its major goals is to introduce young people to aviation and aerospace.

There is no charge to attend.

A nonprofit chapter of the national EAA, the Triple Nickel (as EAA 555 is called) was established in January 1976 and got its own hangar at LCIA thanks in part to former NASA astronaut and one-time Las Cruces resident Frank Borman, who donated part of a hangar he owned to EAA 555 in 2006.

EAA 555 promotes aviation “by supporting aircraft building, flight training and aviation safety.” It sponsors the local Young Eagles, an EAA program that has given flying opportunities to about two million youth across the country and thousands in the Mesilla Valley.