Making connections at the root 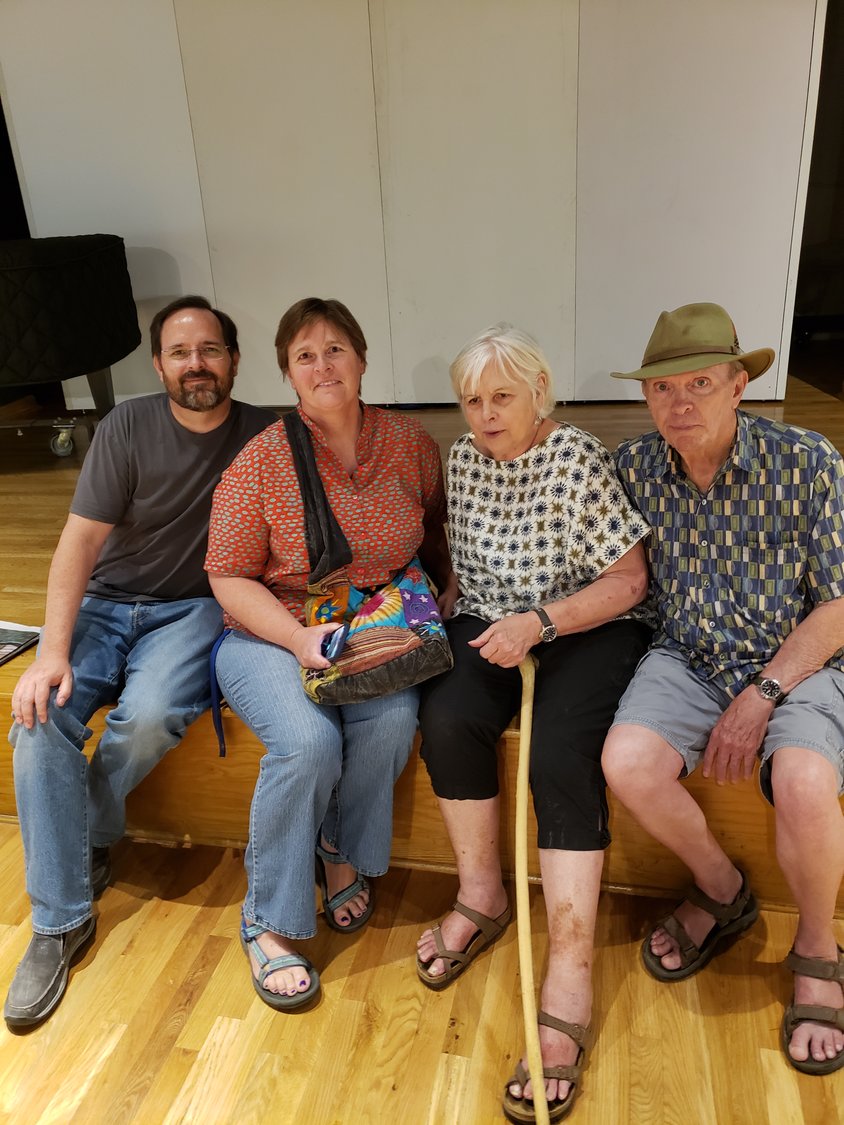 Nicole with brother Curtis Ewing, left, and parents Sharon and Carl Ewing at the Wisdom of Trees and Thorns and Spikes art quilt exhibition at the Branigan Cultural Center.
Photo by Mia Kalish 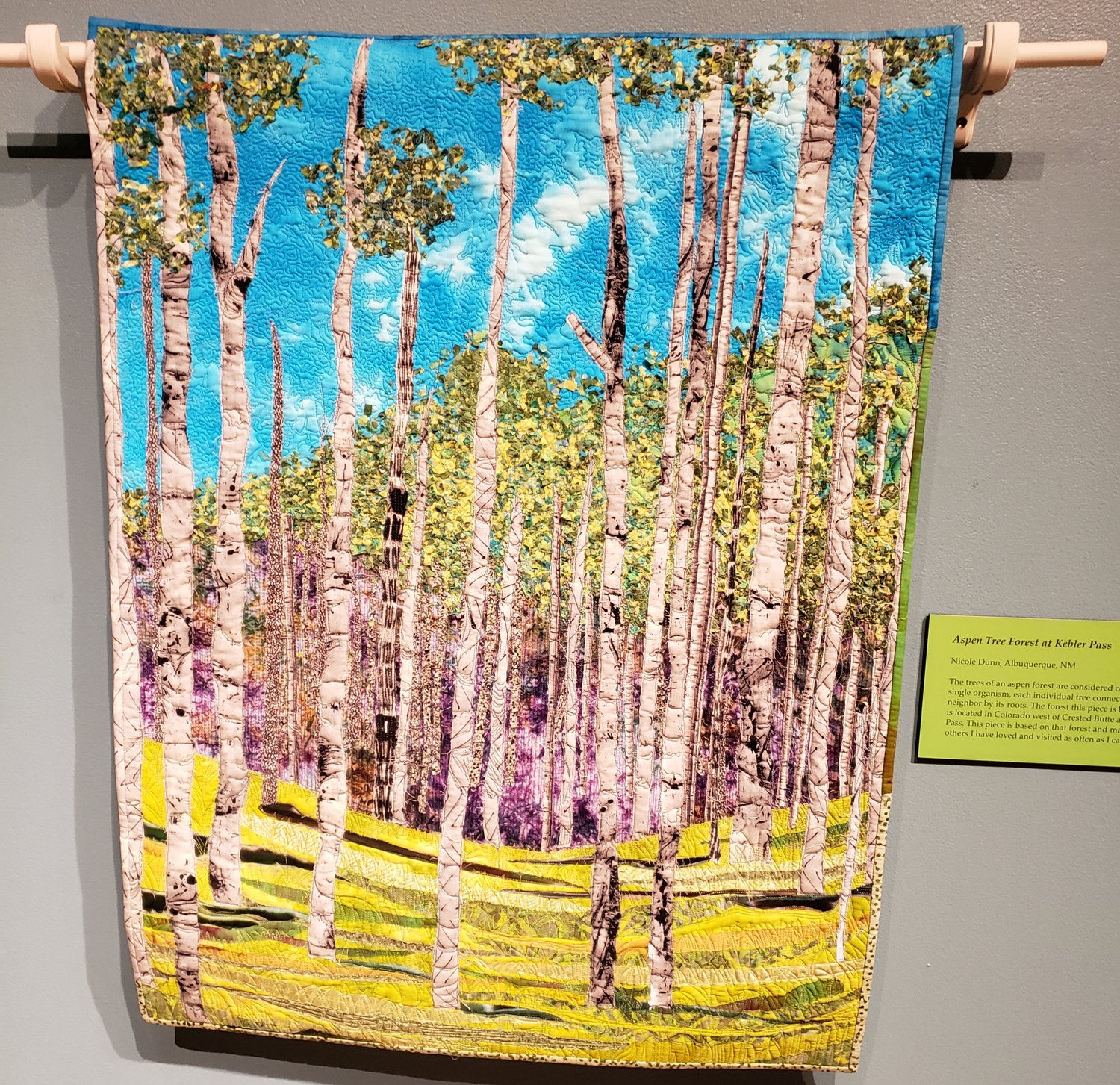 "Aspen Tree Forest at Kebler Pass" celebrating the wondrousness of old growth forests. Based on a photograph taken during a camping trip.
Photo by Mia Kalish 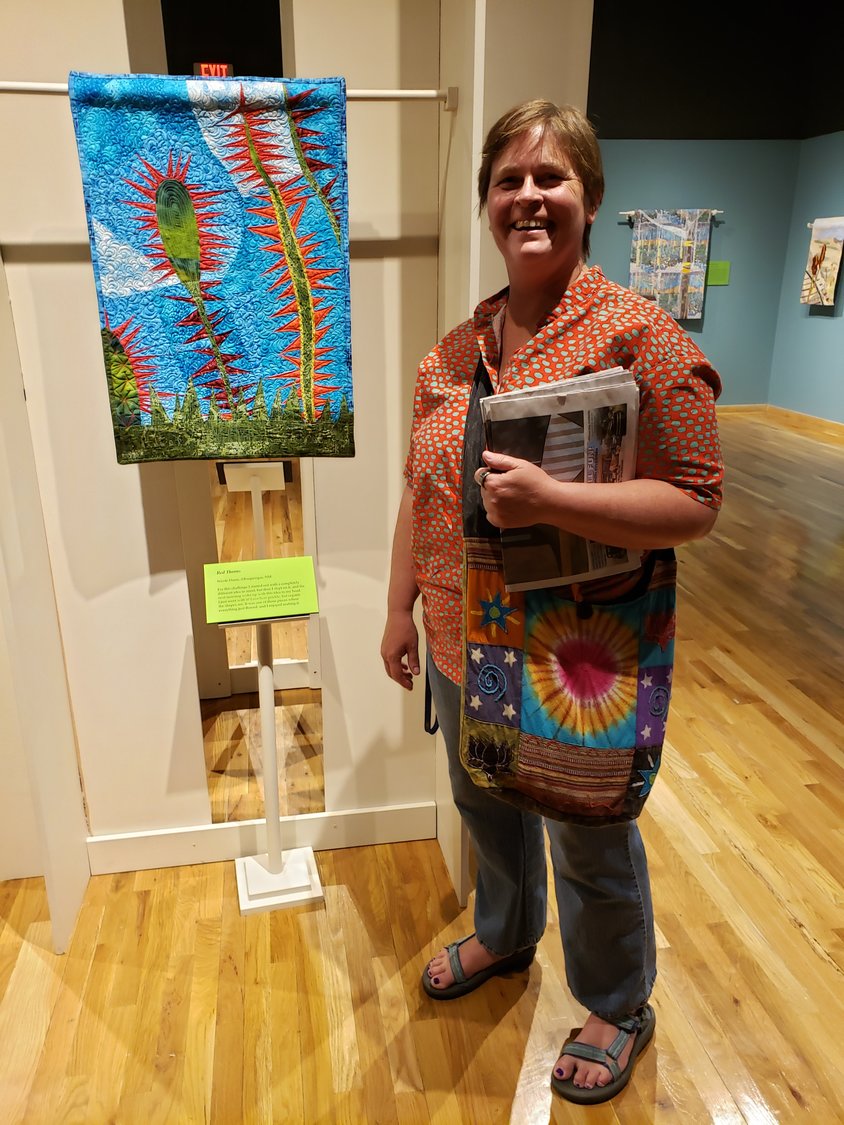 At the Branigan Cultural Center, art quilt artist Nicole Dunn talked about how trees, especially old growth trees, support each other, and help each other, how the roots are so entwined, becoming a dense mat. She said that her quilt “Aspen Tree Forest at Kebler Pass” was actually based on a photograph she took while on a camping trip in Colorado and was iconic in that it was able to represent the many photos she had taken of trees and forests.

We met at the special exhibition of two art quilt collections celebrating the beauty of the Four Corners area called “The Wisdom of Trees and Thorns and Spikes.” I found Nicole in the Shannon Room looking at the quilts with her parents, Sharon and Carl Ewing, and her brother, Curtis Ewing, who live in Las Cruces.

Nicole is a member of an invitational art quilt group called 4 Common Corners started by Ruidoso quilt artist Vicki Conley in 1989. The group does about four shows each year with topics suggested by the group’s members. The common theme is always the dramatic beauty and diversity of the lands of the Four Corners states – Arizona, Utah, Colorado and New Mexico. The Four Corners is additionally unique in that it is the only place in the United States where four states come together and all the artists, with the exception of Vicki’s daughter Shannon, live in one of the four states.

In the gallery, surrounded by the very evocative pieces in the two collections, Nicole reminisced about how she started thinking about trees after the Cerro Grande fire in Los Alamos in 2000, where she was living at the time. Many who live in Los Alamos feel a deep connection to the forests surrounding the tiny town. The memory of that terrible loss brought a deep sadness to her eyes as she revisited those times. “But we’ve recovered,” she said, also recovering and shaking off the sadness.

An ardent hiker and camper, Nicole reflected upon the places she and her family had visited, the photographs she had taken of the beautiful forests, their trees, their leaves, the paths through them. “They are so amazing,” she said. “When you realize what’s going on underneath, how they are so connected?”

Nicole “is especially inspired by color, nature (especially trees), the textures of everyday life such as bark on a tree, marbles lying on a shelf, a little creature on a leaf or the big vistas of her my native Southwest.”

Nicole has two quilts in this show. The second is “Red Thorns” and was chosen as the show’s representative piece. In her quilt story, she tells of how she began with a different idea, but after sleeping on it, woke with a new idea in her head.  “Love how prickly but organic those shapes are,” she wrote, “It was one of those pieces where everything just flowed and I enjoyed making it.”

Save the Date for Love Local Saturday, Sept. 3