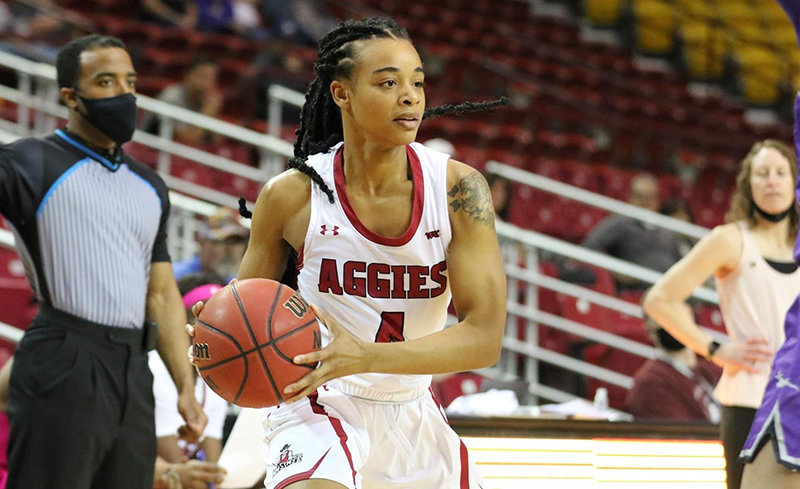 The Aggies will look to put even the season series with Chicago State when they host the Cougars on Senior Day in Las Cruces on Saturday afternoon.
NM State Athletics photo
Posted Friday, February 25, 2022 2:57 pm
NM State Athletics Release

Opening Tip• The Aggies will look to put even the season series with Chicago State when they host the Cougars on Senior Day in Las Cruces on Saturday afternoon.• As so many have this season, the first meeting with the Cougars came down to the final seconds as Chicago State squeaked out a 67-64 win in Chicago on Jan. 25.• Narrow results have been quite the theme for the Aggies this season as 10 contests in the 2021-22 season have been decided by four or less points. This marks the most for any Aggie team since the 2011-12 team that also had 10 decisions within four points.• Despite dropping the matchup earlier in the season, the Aggies still dominate the overall series as Jan. 25 marked the first loss to the Cougars in program history. In total, the Aggies hold an 18-1 record against Chicago State.• Saturday's matchup will mark the first time that Chicago State has to make the trip to Las Cruces since Feb. 6, 2020, with the last three meetings being in Chicago. The last time that the Aggies hosted Chicago State, they defeated the Cougars 80-56 in one of the more lopsided tilts this series has witnessed.• Prior to tip-off on Thursday, the Aggies find themselves slotted in 10th place in the WAC standings but would be slotted in ninth in the WAC Tournament due to Tarleton being ineligible to participate in Las Vegas. The Cougars are also coming off a loss to Grand Canyon - putting them in 13th place and on the outside looking in for the WAC Tournament.• A victory on Saturday, would give the Aggies a guaranteed spot in the upcoming WAC Tournament as they would be three games ahead of the Cougars with just two games remaining for each side.• This will be the 73rd WAC contest in which Brooke Atkinson will be at the helm as the Aggies have compiled a league record of 45-28 during her tenure, including two regular-season WAC titles. The Nitty Gritty• Head Coach Brooke Atkinson leads one of the WAC's top rebounding teams as the Aggies rank second in the conference in rebounding margin, out-rebounding opponents by 5.3 boards per game.• The Aggies also rank second in rebounding margin in league contests as, on average, they collect 6.2 more rebounds than their opponents in WAC games. In WAC play, the Aggies are tops in offensive rebounds per game (15.1) and second in total rebounds per game (39.3).• The Aggies also rank in the top five among WAC teams in free throw percentage (4th, .690), free throws made per game (4th, 11.6) and turnovers forced per game (5th, 17.12).• NM State is led in scoring by graduate transfer Bigue Sarr who ranks 13th in the WAC in points per game (12.9) and second in rebounds per game (8.7). Sarr also posts a field goal percentage of 51.6 percent to rank seventh in the league. Sarr's ability to create second-chance opportunities for the Aggies is also among the league's best as she ranks second in the WAC in offensive rebounds per game, pulling down 3.3 per contest. Scouting the Cougars• Chicago State will be entering Saturday's contest looking to right the ship as it is currently riding a six-game losing streak with its last win coming on Feb. 5 when they took down Tarleton, 58-48.• Though the Cougars sit in last place in the conference, this has still been Chicago State's most successful season since joining the WAC in 2013. The Cougars three wins over WAC opponents play is already more than any CSU team in program history.• The Cougars are led offensively by freshman Aaliyah Collins who averages 14.3 points per game which ranks seventh in the WAC.• In the first head-to-head with the Cougars, Collins finished with 17 points, seven assists and four steals to lead the upset effort.• Both Janiah Newell and Jasmine Covington also reached double-digits in the Jones Convocation Center in January with both scoring 13 points.• Although, the Aggies' biggest issue in the fourth was keeping down Cookie Boothe who scored all nine of her points in the final quarter• Head Coach Tiffany Sardin is in her second year with the Lopes and has generated a record of 4-34 to this point in her career at the helm in Chicago. Last Time Out | NM State 43, Grand Canyon 46 | Saturday, Feb. 19, 2022• The Aggies dropped another close one as they fell to the second-place Lopes by just three points in the Pan American Center• The Aggies were led in the scoring column by sophomore Molly Kaiser as she posted 11 points on a trio of field goals while going 5-of-6 from the charity stripe.• Fama Thiam was also impactful off the bench for the second straight outing – finishing with seven points, three rebounds and a steal.• As a unit, NM State held the Lopes to just 25 percent from the field – nearly 15 percent lower than their season average of 39.7 percent.• The Aggie defense also forced the Lopes into 18 turnovers while turning the ball over 12 times themselves.• The Aggies also force Grand Canyon to equal its lowest total of made field goals this season (13).• The GCU offense was captained by Amara Graham as she finished with 16 points while Tiarra Brown was the game's third double-digit scorer by putting up 11 points to go along with 11 rebounds. Jay McChristine also secured 12 boards for the Lopes. Up Next• Following the Aggies' home finale, NM State has a pair of road contests on the schedule with the first of those coming on Thursday, March 3, when they travel to Nacogdoches, Texas, to take on Stephen F. Austin who remains undefeated in WAC play.• Tip off for the tilt versus the Ladyjacks is scheduled for 5:30 p.m. MT. Sights on SixNM State will seek its sixth WAC regular-season title since the 2014-15 season. Including this season, the Aggies are 85-23 in conference play across the past seven seasons. Preseason PicksNM State was picked to finish in seventh place in the WAC Coaches' Poll while the media selected the Aggies to land in sixth this season. The WAC media also selected junior guard Soufia Inoussa to the Second Team All-WAC list.