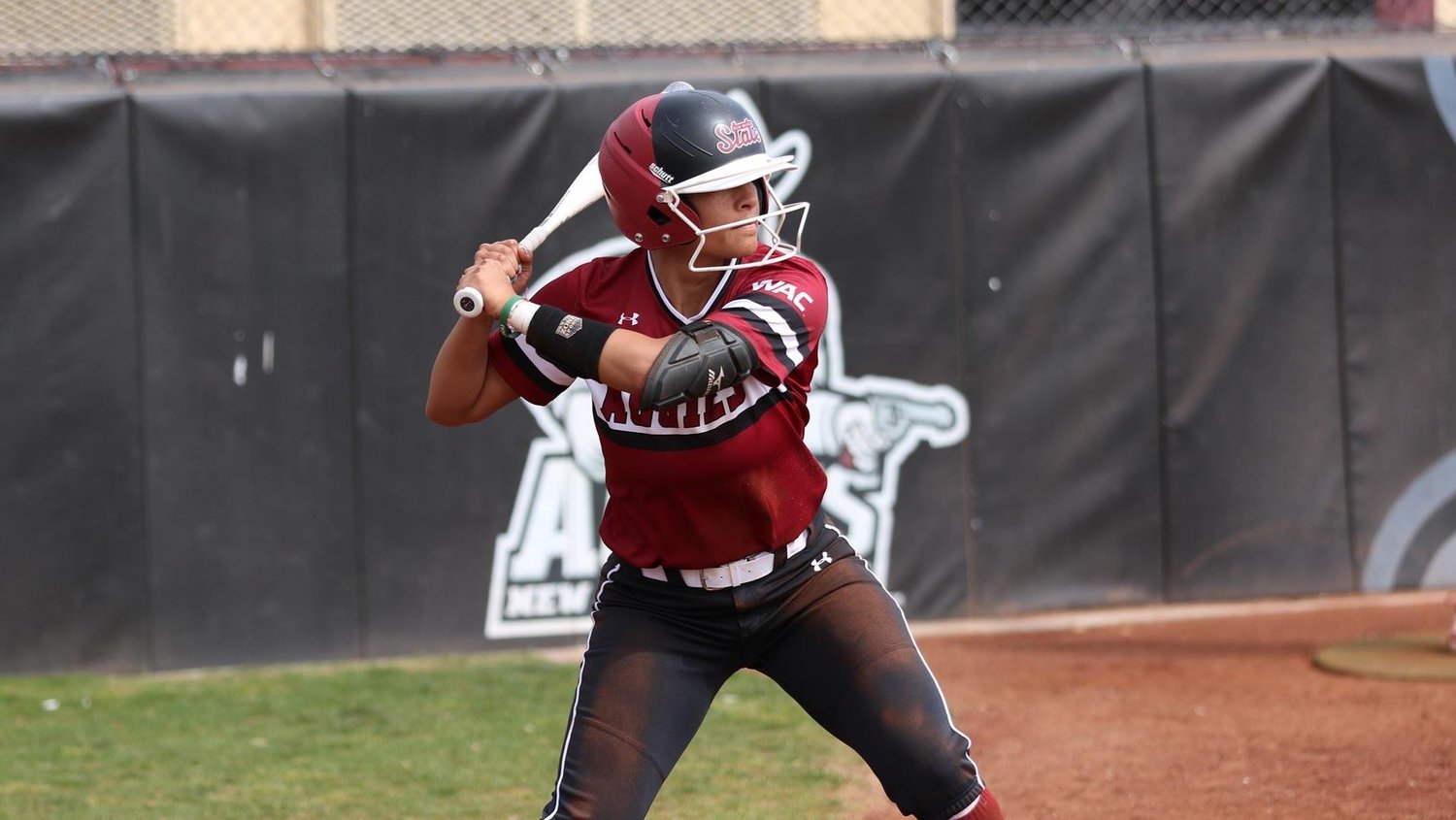 RIVERSIDE, Calif. – NM State's weekend concluded with a 6-1 loss to California Baptist on Saturday evening. Despite out-hitting the Lancers for the second time in the three-game series, NM State was unable to get enough runs across to win either game.

Jordin King (3-7) notched her second start of the weekend as she got the ball in the first inning for the Crimson and White. King threw two perfect innings to start the game and finished with 3.0 innings pitched.

The Aggies got off to another quick start as Jillian Taylor hit a single through the right side of the infield to push her hit streak to 14 games. Two hitters later, Kayla Bowen hit an infield single and Taylor exploded off second base to come all the way around and score the first run of the evening.

In the bottom half of the first, King pitched the Aggies' first three up, three down inning of the series to keep the Aggies ahead by one after one inning.

After the Aggies were unable to do any damage in the top half of the second, King recorded her second-straight perfect inning to allow the Aggies to maintain their narrow lead.

The Aggies were held scoreless for the second straight inning, however, the Lancers were finally able to figure out King as two of the first three Lancer batters reached base. The second Lancer hit came off the bat of Samantha Demyon who drove one to the warning track in left center and allowed Deja Westbrook to score from second – tying the game at one run apiece.

The third inning continued to be a rough spot for the Aggies as Demyon eventually came around to score when Katelyn Mangrello reached on a fielder's choice with one out. Karmyna Beccerra added two more for the Lancers when she hit a two-out triple to bring home Mangrello and Sydney Soto.

NM State's Bowen started the fourth inning on a positive note as she singled into shallow left to reach base for the second time of the game. After the Lancer defense was able to turn a double play in the next at-bat, Maya Martinez tallied the first Aggie triple of the season as she put one into right field. This would also mark Martinez's first triple of her career. However, the Aggies were unable to bring Martinez home as NM State entered the bottom of the fourth inning trailing by three runs.

The Lancers were then able to load the bases with no outs in the home half of the fourth inning when a passed ball allowed California Baptist to score its first run of the inning and fifth run of the tilt. Despite threatening to score more, the one run was the only scoring CBU would do in the inning.

Savannah Bejarano recorded her third hit of the season to leadoff the fifth inning, however, she would eventually be sent back to the dugout after runner interference was called when she attempted to reach second on a ball hit by Jayleen Burton. After a hit by Jillian Taylor, NM State was unable to move any more pieces as they went back into the field trailing by four runs.

Patane was then able to hold the Lancers scoreless for the first time since the second inning as NM State entered the sixth still behind by four runs – trailing 5-1.

The top of the sixth resulted in just one hit from the Aggies as Maya Martinez hit a two-out single but NM State failed to cut into the lead.

In the Aggies' last at-bat, Madison Muxen entered the game and recorded the second triple of the game and season for the visiting Aggies. However, CBU was able to put away the next two batters to earn the 6-1 win and series sweep of the Aggies.

UP NEXT
NM State now gets ready for its second WAC homestand of the season as they welcome the Wolverines of Utah Valley on Friday and Saturday of the upcoming week.

Friday's contest is set to get underway at 6 p.m. while the doubleheader scheduled for Saturday begins at 4 p.m.