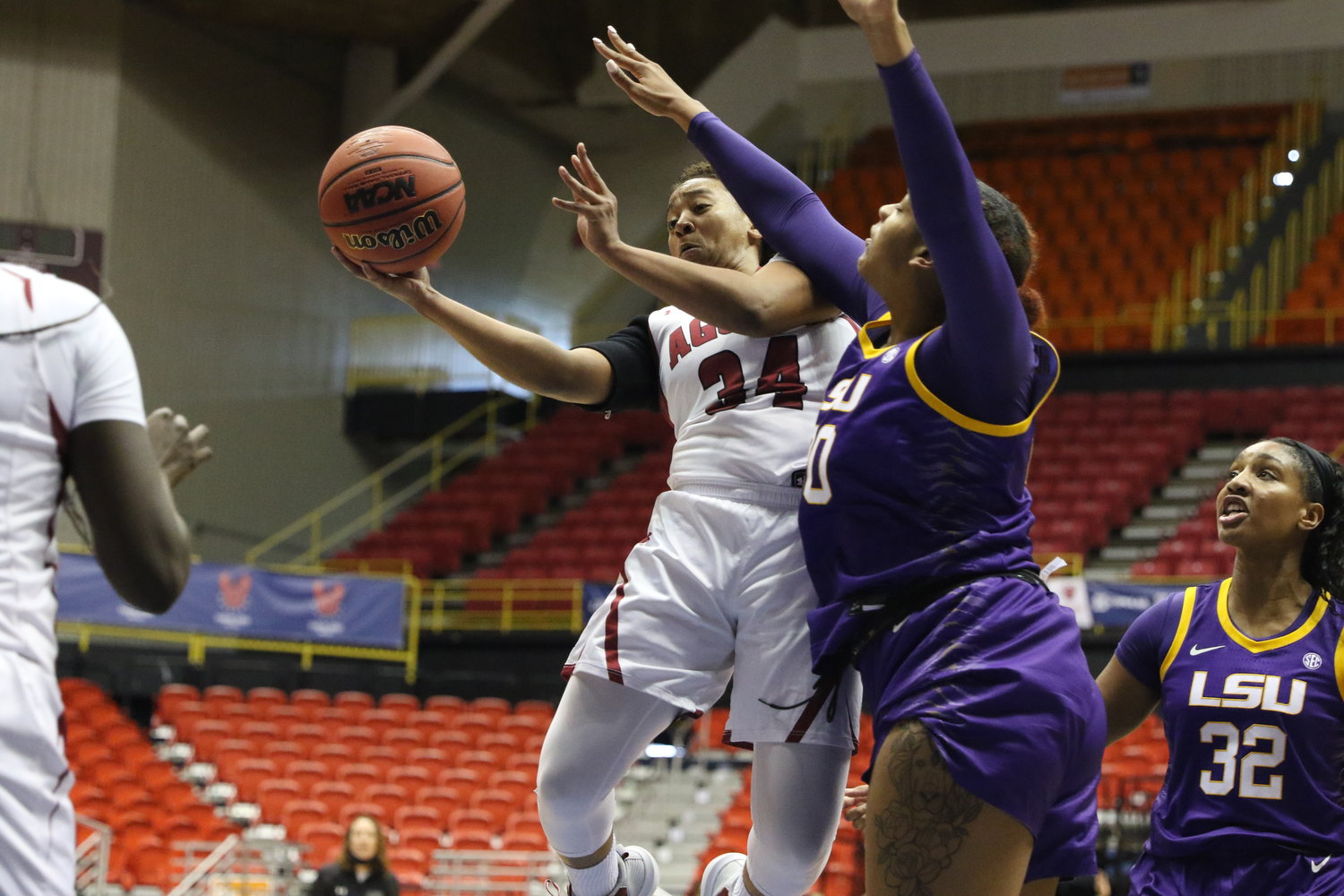 Tayelin Grays goes to the hoop against Louisiana State during the San Juan Shootout over the Thanksgiving weekend.
COURTESY PHOTO FROM NMSU ATHLETICS
Posted Thursday, December 2, 2021 10:20 am
By Dave Burge

The New Mexico State University women’s basketball team promises one thing this season – it will play hard every game.

“We will put our defense first, work hard and our offense will come,” said Tayelin Grays, a senior guard from Dayton, Texas.

Head coach Brooke Atkinson, now in her fifth year leading the program and 13th year overall at the school, said fans can expect the team to give its best effort each and every game.

“We will play hard,” Atkinson said. “We will defend. We will be an exciting team to watch. I think we have depth. If one person is having an off night, another person can step up. We always want to be the toughest team and the hardest working team on the floor.”

Last season, the Aggies had to deal with some of the most stringent Covid protocols in the nation and didn’t play any true home games at the Pan American Center. Instead they played two “home” series in El Paso, 45 miles away.

They ended up playing an abbreviated schedule and went 6-6 in the WAC and 9-12 overall.

The Aggies are off to a 3-2 start this season. They spent the Thanksgiving weekend in Puerto Rico at the San Juan Shootout. There, they played Louisiana State, a member of the powerful Southeastern Conference, and Tennessee Tech. The Aggies lost 72-52 to LSU after leading by one at halftime but bounced back to beat Tennessee Tech 66-54.

“We have a tough schedule,” Atkinson said. “That’s why you build it into the nonconference – to get better, to learn. When we get into league, that’s what will matter.”

After returning from Puerto Rico, the Aggie women will play three rivalry games in a row. They hosted I-10 rival UTEP on Wednesday, Dec. 1. The game was past our deadline for the week, so I can’t include the score here.

Then, NMSU will travel to Albuquerque to play the University of New Mexico at 7 p.m. Friday, Dec. 3 and then will host the Lobos at the Pan Am at 2 p.m. Sunday, Dec. 5.

Of course, conditions can always change with the ever-evolving Covid pandemic, but players and coaches say they are super stoked to be able to play games again at the Pan Am in front of ultra-supportive Aggie fans.

“It’s really nice to be back at home and have some consistency,” Atkinson said. “We are staying in the same beds, have the same routine every day. Last year, we were in a different hotel or resort. There was no consistency, except for the Covid situation.”

Grays also said playing in front of Aggie fans should make a difference this year.

“Last year was difficult,” she said. “We couldn’t play in front of our fans. Our fans really mean a lot to us. Just being able to play in the Pan Am, we missed out on that big time (last season).

“It’s a great environment to be able to play in front of our fans again,” she said.

Senior Janessa Johnson grew up in Las Cruces and starred at Las Cruces High School, where she averaged 11.7 points per game and 1.9 steals as a senior.

She was a regular at the Pan Am when she was growing up and got to meet plenty of players over the years.

“Just being able to come back to my hometown and be able to play for them, words can’t explain it,” Johnson said.

Johnson missed all of last year with an injury and played two years before that at Cochise College in Arizona.

Johnson and Grays both say the women have their eyes set on winning the WAC championship this year and going to the NCAA tournament. It won’t be easy.

The Aggies were picked to finish seventh in the conference in the preseason coaches poll and sixth by the media.

“We want to get better each day in practice and not look too far ahead,” Atkinson said when asked about any goals for the season. “Every game is a tough game. We have to show up and do our best.”

Johnson said the team is close and always tries to pick each up, calling it a “sisterhood.”

Johnson said the trip to Puerto Rico will help the team bond even more.

“I think it is a really good experience to play harder teams like this,” she said. “I think it will help us more in our conference.”