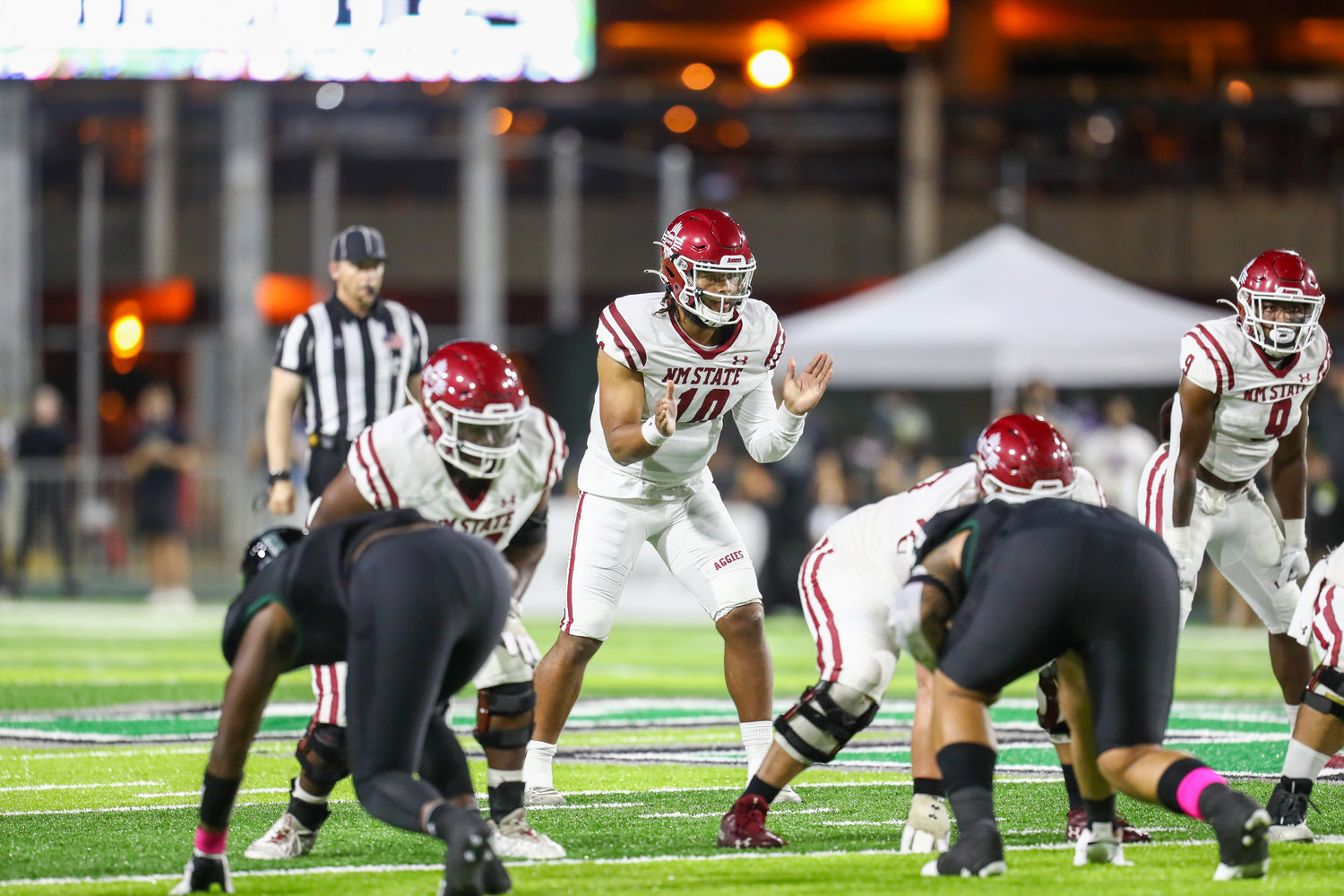 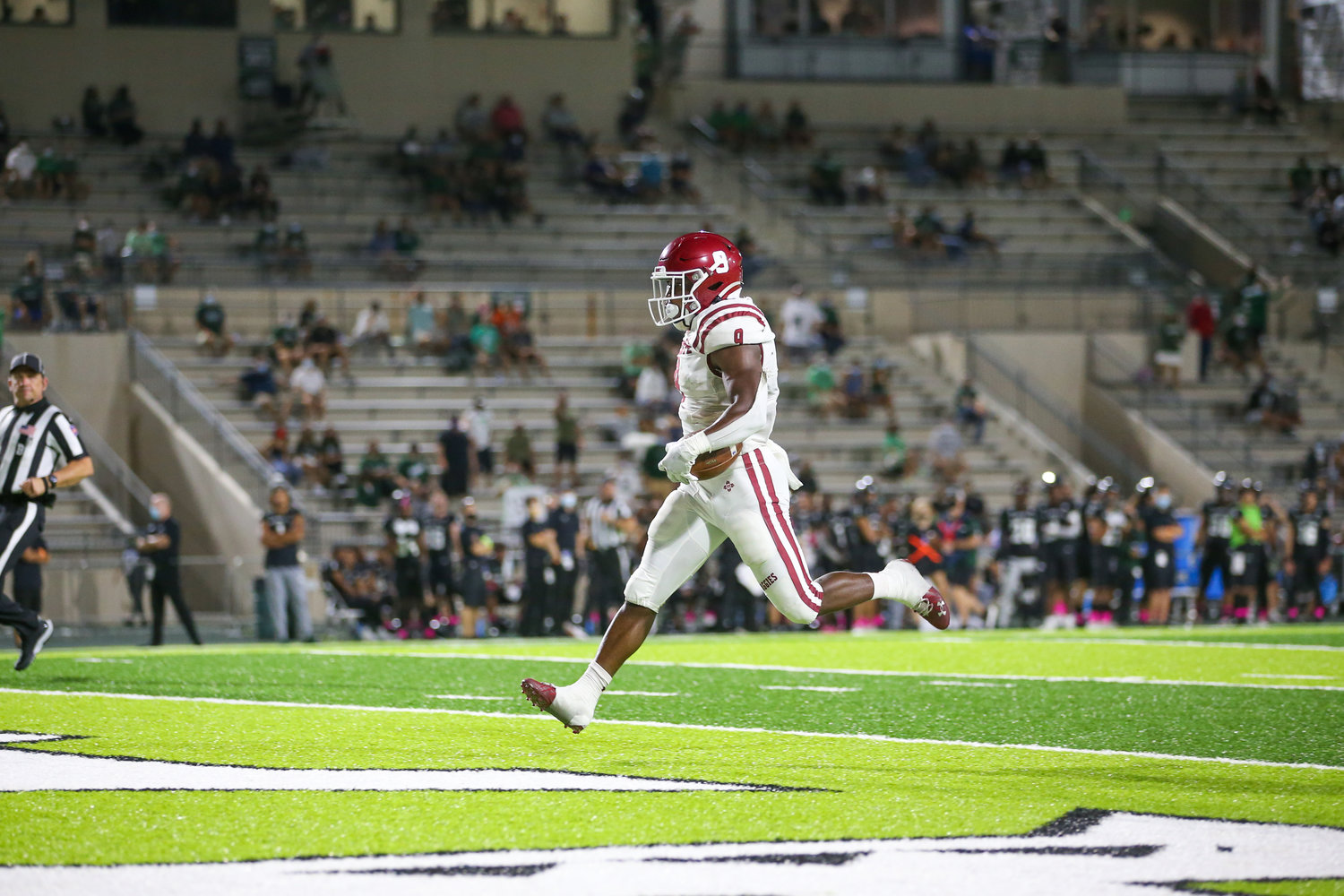 Juwaun Price scores a touchdown vs. Hawaii on Oct. 23.
Courtesy NMSU
Previous Next
Posted Monday, October 25, 2021 8:53 am
From NMSU Athletics

HONOLULU -- Despite a career-night from running back Juwaun Price, the NM State Aggies fell 48-34 Saturday night to the Hawai'i Rainbow Warriors Saturday night at the Ching Complex.

In the loss, quarterback Jonah Johnson completed 24-of-54 passes for 228 yards. Johnson added 84 yards rushing and ran for a pair of scores, but was intercepted twice. Both of Johnson's picks were returned for touchdowns.

After a solid 44-yard boot from punter Josh Carlson, the Warriors and backup QB Brandon Schager orchestrated a seven-play drive that advanced all the way to the NM State 18.

On third down and three, cornerback Syrus Dumas tackled Hawai'i for a loss of six that forced UH into a 41-yard field goal that gave the home team a 3-0 lead with 10:37 to play.

Two drives later, Johnson and the Aggies' answered with a 10 play, 31-yard drive that ended in an Ethan Albertson 27 yard field goal that tied the score 3-3 with 4:41 to play in the opening period.

The Hawai'i offense sprung to life on the next drive, as backup running back Dedrick Parson capped a nine-play, 79-yard drive with a nine-yard run that found paydirt. The rushing touchdown was one of three scores that Parson would rush for on the evening. Parson finished with 161 yards rushing, and 54 yards receiving to finish with 215 all-purpose yards.

NM State looked to be driving on the ensuing possession, but a once-promising drive that advanced all the way to the UH 24 ended in a 75-yard pick-six by Khoury Bentley. The pick-six gave UH a 17-3 advantage with 13:38 to play in the second period.

The Hawai'i defense forced another three-and-out on the next NM State possession to jumpstart a 12 play, 74-yard drive that ended in a one-yard rushing score by Parson. The scamper gave Hawai'i a 24-3 lead with just 6:56 to play.

Needing a spark, Price provided just that on the Aggie's next drive, as the running back took a third-down carry for a 56-yard house call that brought his side to within 24-10 with 5:05 to play in the opening period.

After the two sides traded three-and-outs on the ensuing two possessions, the Rainbow Warriors muffed a punt that was recovered by long snapper Austin Reeves.

The turnover was one of two fumbles NM State would recover on the evening and set the Aggie offense up inside UH territory with 128 seconds to play in the opening period.

Johnson would turn the turnover into points, leading a seven-play drive that culminated in a 44-yard boot from Albertson that brought the Aggies to within 24-13 with 38 ticks to play.

Following halftime, the Aggie defense rode the momentum for the end of the first half as Chris Ojoh ended a UH drive prematurely with a strip-sack that was recovered by Michael Bowe Jr at midfield.

The turnover proved to be a key moment as the Aggies went on a 10-play, 56-yard touchdown drive. Johnson ended the aforementioned drive with a one-yard touchdown run that brought his team to within 24-20 with just over eight minutes to play in the third.

Hawai'i would end the 17-0 Aggie run on its ensuing drive, culminating an 11-play drive with a 27-yard Shipley field goal that gave UH a 27-20 lead.

With the chance to tie the contest for the first time since the opening period, NM State used a 46-yard rush by Price to do just that. The touchdown, Price's second of the contest, tied the game at 27-all with 90 seconds to play in the third.

On the very first play of the ensuing drive, athlete Calvin Turner ran for a 75-yard score that gave UH a 34-27 advantage with 1:18 to play in the third.

Looking to respond, Johnson advanced this team all the way to the UH 33, before throwing another interception that was returned for a touchdown by Darius Muasau. The score gave Hawai'i a commanding with 12:06 to play.

Johnson capitalized on his next opportunity, leading an 11 play, 75-yard drive that ended with his second (seven-yard) touchdown of the night. The score brought the Aggies to within 41-34 with 7:48 to play.

The Aggie defense forced Hawai'i a third down and 11 on the next possession, but Schager hit WR Nick Mardner for a 49-yard pass that set up the final UH TD. Schager finished 25-of-29 for 219, while Mardner hauled in four passes for 81 yards.

NM State could not put any more points on the board, as UH held on for the 48-34 victory.

COACH SPEAK (HC DOUG MARTIN):
"I told our guys after the game if we could have taken away one mistake on offense and one mistake on defense we would have won the game. That's how thin our margin for error is right now. Jonah got hit as he was throwing the ball on one interception, and then defensively they were able to answer every time we scored. That's when you need to get a stop as a defense. Both sides did some great things. They're battling and playing as hard as they possibly can, but both sides made just one too many mistakes."

UP NEXT:
Following the second and final open date of the season, NM State returns to action on Nov. 6 for a contest against Utah State. Kick-off from Aggie Memorial Stadium is set for 2 p.m.