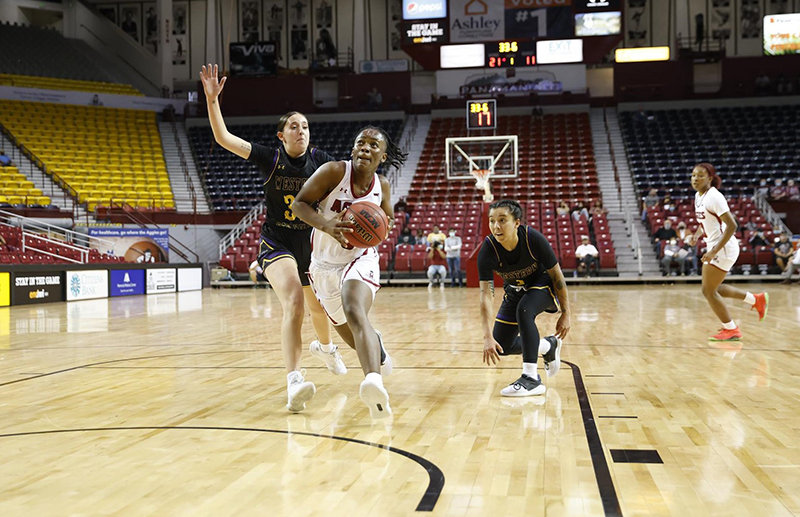 The Aggies looked fresh early on as they jumped out to a 12-2 lead in the first four minutes of the opening quarter. The Mustangs responded with a quick 6-0 run to cut their deficit to six with 3:35 to go in the first. Molly Kaiser's team-leading nine points in the first helped NM State close out the quarter with a 12-point advantage.

The defense took over in the second quarter as the Aggies forced seven second-quarter turnovers to generate quick offense. In the second period, NM State scored nine of its 24 points off turnovers and held the Mustangs to just seven points to head into the break with a 47-18 lead. Mel Isbell finished the half with six assists and Oklahoma State transfer Bigue Sarr led all scorers with 16 points.

The second half was more of the same for the home squad. A pair of Mel Isbell free throws and a Tayelin Grays fast break score forced the Mustangs to call an early timeout at the 9:09 mark in the third quarter. Kaiser continued to roll offensively as she posted seven third quarter points to lead NM State to a 50-point lead after three quarters.

The Aggies kept the foot on the gas in the fourth with seven of Kayla Watkins' 11 points coming in the final quarter. In the opener, five Aggies reached double digits with Kaiser's 18 leading the way. Sarr finished with 16 points, Watkins posted 11, while Grays and Deja Terrell came away with 10 each.

In the first home contest since Feb. 29, 2020, the Aggies forced 26 turnovers and outrebounded the Mustangs 41-25 to move to 1-0 on the season. As a team, NM State shot 47.9 percent from the field and knocked down six triples.

New Mexico State now tunes up for a home matchup against Incarnate Word this Saturday, Nov. 13, at 4 p.m. Fans can watch the second game of the season on ESPN+.