NM State is set play rescheduled matchup against the Vaqueros 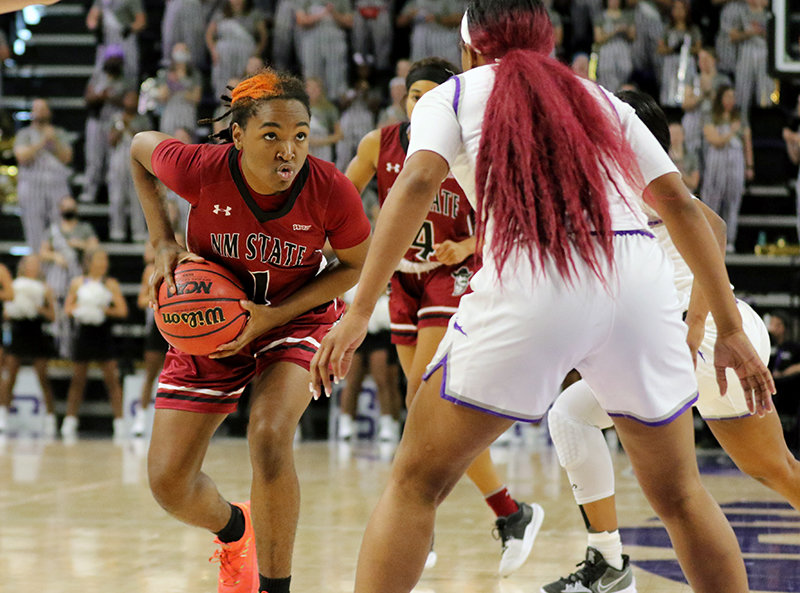 Opening Tip
• NM State looks to get back on track after dropping a heartbreaker to Grand Canyon as they welcome UT Rio Grande Valley on Monday with tip-off set for noon.
• The contest versus the Vaqueros will be just the second game that the Aggies compete in on a Monday as the matchup was initially scheduled for Jan. 8, however, had to be postponed due to COVID-19 protocols.
• This will be the 64th WAC contest in which Brook Atkinson will be at the helm as the Aggies have compiled an impressive league record of 42-22 during her tenure.
• In the series history againt the Vaqueros, the Aggies hold a commanding record of 16-3, including a nine-game win streak that stretched from 2016-20. The Aggies have also only fallen at the hands of the Vaqueros once in the last 11 matchups.
• Due to last year's set of games being canceled, the Aggies have not faced off with UTRGV since March 11, 2019, when NM State defeated UTRGV, 73-61, in the WAC Tournament Quarterfinals.
• The Aggies have been dominant against UTRGV when playing in the Pan Am as they are 6-1 all-time in home games against the Vaqueros.
• With a string of unfortunate outcomes, the Aggies have now found themselves near the bottom of the WAC standings and this result could go a long way in seeding for the WAC tournament later this year as the Aggies currently sit in 10th while UTRGV is seventh in the league.
• The Vaqueros are led by Lane Lord who is in his fourth season down in Edinburg, Texas, and holds a record of 1-5 in six meetings with the Aggies.
• Head Coach Brooke Atkinson leads one of the WAC's top rebounding teams as the Aggies rank first in the conference in rebounding margin, out-rebounding opponents by 4.9 boards per game.
• The Aggies also rank in the top five among WAC team in field goal percentage (3rd, .430), free throw percentage (3rd, .709), scoring defense (5th, 62.6), scoring margin (4th, 5.3), scoring offense (4th, 67.9), three-point field goal defense (2nd, .297), turnover margin (4th, +1.31) and turnovers forced per game (4th, 18.00).
• NM State is led in scoring by graduate transfer Bigue Sarr who ranks ninth in the WAC in points per game (13.8) and fourth in rebounds per game (7.6). Sarr also posts a field goal percentage of 57.2 percent to rank third in the league and 17th in the nation in that category.

Scouting the Vaqueros
• The Lopes are coming off a 64-58 victory over Tarleton and as they snapped a two-game losing streak and move to 4-4 in WAC play.
• Against the Texans, UTRGV was led in scoring by Sara Bershers as she posted 20 points to record her fifth 20-plus point outing of the season.
• Bershers is also the Vaqueros' leading scorer on the season and ranks 10th in the WAC by way of averaging 13.7 points per game.=
• UTRGV's top rebounder is Taylor Muff who pulls down 7.5 boards per contest.
• The Vaqueros' offense revolves heavily around the three ball as they rank fourth in the conference in three-pointers made per game at 6.6.
• Lane Lord's squad will be a tough test for a strong-rebounding Aggie team as UTRGV ranks fourth in the WAC in rebounds per game, pulling down 37.4 rebounds on average.
• Wearing a UT Rio Grande Valley jersey on Monday, will be one of the top guards in the WAC in Jena' Williams who's assist-to-turnover ratio of 1.76 ranks third in the league.

Last Time Out | NM State 59, Grand Canyon 61 | Saturday, Jan. 29, 2022
• A near-buzzer-beater is what GCU needed to take down the Aggies on Saturday afternoon as a fade away from Amara Graham with 0.3 seconds remaining gave the Lopes a two-point victory.
• UNLV transfer Mel Isbell was the Aggies' top scorer as she drained four three-pointers on her way to scoring 14 points.
• Sophomore Taylor Donaldson was effective off the bench once again as she tallied 12 points to go along with four steals.
• As a group, NM State shot 42 percent from the floor, including 40 percent from deep while forcing 21 turnovers. Despite the Aggies being one of the better rebounding teams in the WAC, the Lopes led in that category as they pulled down 31 boards compared to the Aggies' 29.
• The Lopes were led by the post play of Jay McChristine who finished with a game-high 19 points in addition to recording seven rebounds.
• UT Rio Grande Valley transfer Amara Graham also reached double-digits as she posted 13 points, including the most important two points of the game with 0.3 seconds remaining.
• The contest featured 14 changes with GCU's eight-point advantage at the 3:36 mark in the first quarter being the largest point of separation during the meeting.

Up Next
• The Aggies will now begin a tough three-week stretch in which they are scheduled to play three games each week.
• Following Monday's matinee, the Aggies will travel to Riverside, Calif., to take on last year's regular-season WAC Champion in California Baptist on Thursday, Feb. Tip-off is set for 7 p.m. MT inside the CBU Events Center.

Sights on Six
NM State will seek its sixth WAC regular season title since the 2014-15 season. The Aggies are 80-18 in conference play across the past seven seasons.

Preseason Picks
NM State was picked to finish in seventh place in the WAC Coaches' Poll while the media selected the Aggies to land in sixth this season.

Bringing Home the Hardware
Following her final season with the Aggies, Aaliyah Prince earned Second Team All-WAC and WAC All-Defensive Team honors. Prince finished the season ranked 11th in the league in steals per game while ranking 13th in points per game.