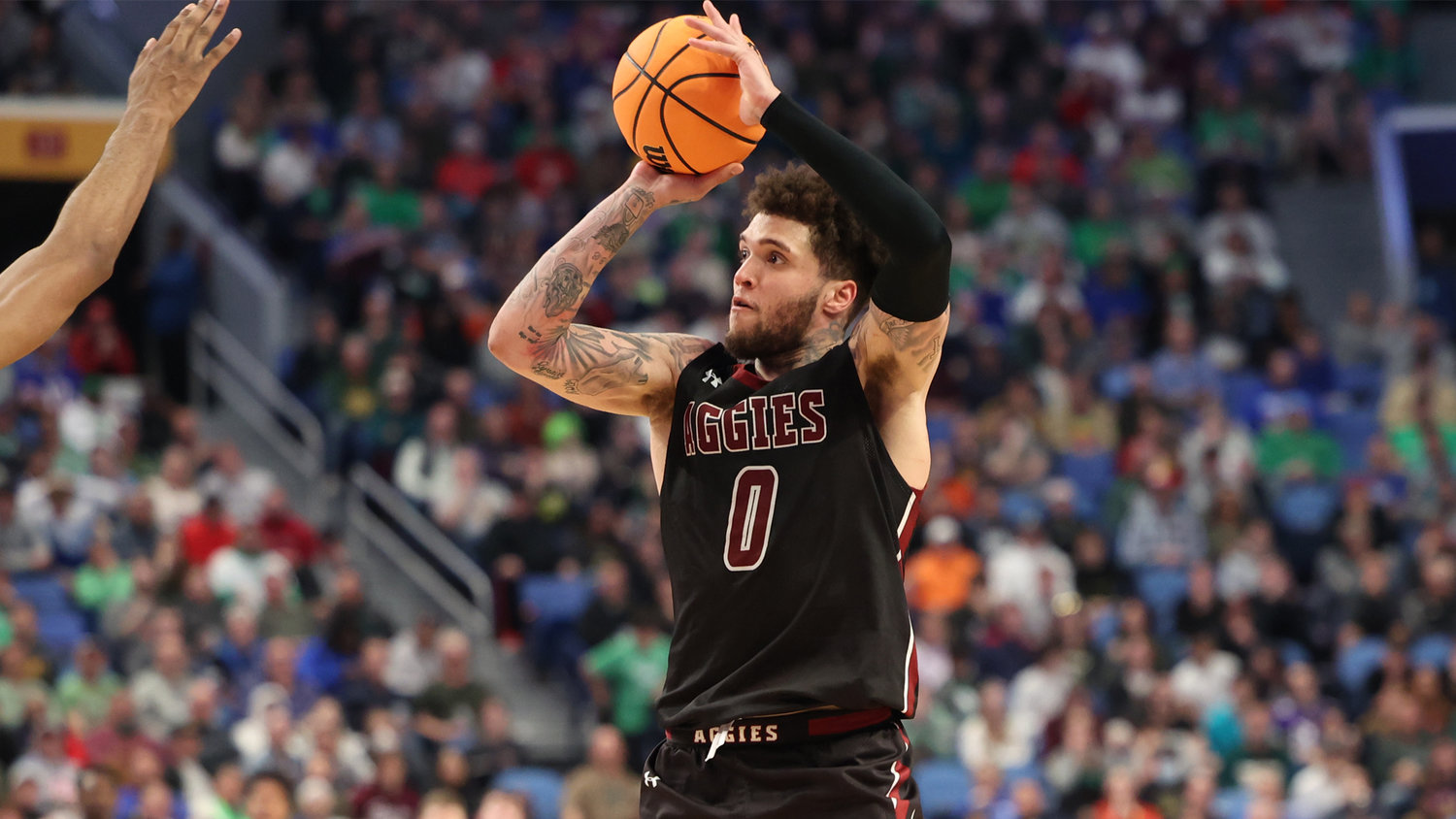 BUFFALO, N.Y. - Before Teddy Allen captivated a nation, before he became a symbol for the madness of March and only hours before he had legendary broadcaster Brad Nessler singing his praises to millions tuning in at home, he was not nearly as locked in as he needed to be.

Nor were the rest of the members of the NM State men's basketball team, for that matter.

Head coach Chris Jans made sure the Aggies knew it when he blew the whistle at 11:07 a.m. ET on Thursday morning, summoning the 12th-seeded Aggies to center court at the Kevin I. Sullivan Center on the campus of Medaille College (an NCAA Division III institution with an enrollment of 1,600, for the uninitiated).

"It needs to be better," Jans said, bluntly. He was right, though. It - the team's practice - did. Up to that point in NM State's practice session did not have the crispness or execution necessary to help it spring any kind of upset in mid-March.

"If you don't think so, you're preparing to lose," Jans continued.

The rest, as they say, is history. A hell of a chapter in the lengthy March Madness tome, at that.

Allen's star power vastly exceeded anything the Aggies' opponent had to offer as the 2022 Western Athletic Conference Player of the Year put the nation on notice with a 37-point barrage to lift 12th-seeded NM State to a 70-63 triumph over #21/21 and fifth-seeded UConn in the opening round of the NCAA Tournament inside the KeyBank Center Thursday night.

Finally giving NM State faithful a postseason win fans had thirsted for nearly three full decades, Allen personified the wild, bracket-busting upsets during this time of year by putting on a show worthy of stories for years to come.

FIRST HALF
• Fans of a defensive brand of basketball got their money's worth in the early stages of the inaugural meeting between the Aggies and Huskies. With just four total points on the scoreboard five minutes in, Jabari Rice broke a 2-2 deadlock by splashing a three-pointer on the win courtesy of a fine pass by Johnny McCants at the 14:54 mark.
• Up 5-2 at that point, NM State saw the Huskies take off on a 10-3 run to open up a 12-8 lead. Tyler Polley put his accurate long-distance touch on display through that surge, splashing a pair of triple to put the chalk back on top by a 12-8 margin with 10:15 left in the opening stanza.
• After that, Allen began to heat up. Hitting just one of his first seven tries from the field in the game's first 10:19, one of the nation's best pure scorers showed exactly why he had gained that reputation by netting the next seven points for the higher-seeded Aggies. His pull-up trifecta finished off NM State's 8-2 surge at the 7:50 mark and handed NM State a 15-14 lead.
• UConn took the lead just one more in the first frame. That came to pass when Andre Jackson's layup with 6:38 on the clock put the Huskies in front 16-15. From there, though, Allen's must-see-TV show really ramped up.
• Ending the opening stanza on a 17-6 run, the Aggies relied almost entirely on the hot-shooting guard who was more than happy to introduce the nation to the class of the WAC. After Clayton Henry hit Rice for his second triple of the frame to answer Jackson's layup, NM State didn't fall behind ever again. Allen either scored or assisted on nine of the Aggies' final 11 points of the frame, including providing the pivotal dish on McCants' corner three-pointer as the shot clock expired with 1:29 left in the frame.
• That triple from the pride of Las Cruces, N.M., hiked the Aggies' lead to double-digits, 30-20, and a step-back jumper with 39 ticks left courtesy of Allen made sure NM State's advantage remained in double-digit territory at the halftime horn.
• Ahead 32-22 at the break, Allen had contributed 14 of the Aggies' points at that juncture. NM State put up shooting splits of .462/.625/1.000 through the first 20 minutes and owned a 17-11 edge on the glass against one of the nation's strongest squads on the glass.

SECOND HALF
• NM State's lead bulged to its largest of the game following Henry's straightaway triple 1:38 into the final half. That bucket put NM State's edge at 38-24, but that's when the Huskies decided they didn't want to fall victim to an upset - at least not without a fight.
• A 14-4 run by UConn cut NM State's once comfortable lead down to four, 42-38, with 12:28 to go. Fortunately, the Aggies answered the ball by rattling off a 5-0 run culminating with a driving one-handed flush courtesy of Will McNair Jr.
• Punching back, the Huskies scored the game's next eight points which cut the Aggies' lead down to 47-46 with 8:20 left. An dramatic game of call-and-response followed for a few minutes before Tyrese Martin canned a pair of free throws with 5:08 left which knotted matters at 52-all.
• With drama injected into the tilt, Henry hit arguably the game's biggest shot. The senior out of Calgary, Alberta, Canada, broke the tie with a colossal three-pointer at the top of the arc before the Huskies tied things for the final time by way of a 6-3 run.
• Right after Isaiah Whaley pulled UConn even at 58-58 with a layup at the 2:06 mark, Allen decided it was his time to take center stage.
• No other player put in a single point for NM State, but it didn't matter with the ball in the hands of "Teddy Buckets". Allen broke the tie for good by connecting on a crowd-pleasing wing triple with 1:43 left and proceeded to put the game away from there. Two more free throw makes from Allen with 52 seconds to go answered a driving layup by R.J. Cole, but it was Allen's nifty drive through traffic after forcing the Huskies' eighth and final turnover of the game that iced the game. Allen twisted his way inside, hit a layup, got fouled and calmly nailed a free throw to complete his three-point play which pushed NM State's lead to 66-60 with 27 seconds left.
• Though Martin called buckets on a three-pointer of his own with 18 seconds left, Allen finished off the Huskies by going 4-for-4 at the foul stripe to close things out.

KEY PERFORMERS/STATISTICS OF NOTE
• Etching his name into NCAA Tournament lore, Allen's 37 points matched the KeyBank Center record for points in a single game. Additionally, those 37 markers represented the most in an NCAA Tournament game at the facility. Jameer Nelson had previously held the record after firing in 33 points for St. Joseph's in an NCAA Tournament tilt with Liberty on March 18, 2004.
• Allen's unforgettable performance on a national stage represented his second-highest scoring total of the 2021-22 season as well as his fifth outing of 30 or more points this season. The Phoenix, Ariz., product added six rebounds and a trio of assists for NM State which won its first NCAA Tournament game since 1993.
• That 1993 victory (over Nebraska) was vacated by the NCAA as part of a sweeping move made that wiped out three March Madness appearances by the Aggies due to academic fraud. Officially, according to the NCAA's books,
Thursday night's victory was NM State's "first" triumph in the big dance since Lou Henson's 1970 crew secured a win over St. Bonaventure in the NCAA's third-place game after losing to eventual national champion UCLA in the Final Four.
• Jans, in his fifth year as the Aggies' head coach, became the first NM State bench boss since the late Neil McCarthy to leave the court as a victory in an NCAA Tournament tilt. Thursday night's victory pushed Jans' mark in NCAA Tournament tilts to 1-2 and snapped a 12-game losing skid for NM State on college basketball's biggest stage.
• NM State was one of four double-digit seeds who advanced to the second round of the 2022 NCAA Tournament. Joining the Aggies' in the ranks of the Cinderella's were 14-seed St. Peter's (85-79 OT win over two-seed Kentucky in the East Region), 12-seed Richmond (67-63 win over five-seed Iowa in the West Region) and 11-seed Michigan (75-63 win over six-seed Colorado State in the South Region).
• The upset victory represented the first NCAA Tournament win by any current Western Athletic Conference (WAC) institution. The last time a WAC program captured a March Madness victory came in 2007 when Nevada (now in the Mountain West) took down Creighton.
• Allen went a perfect 13-of-13 from the free throw line, too, accounting for all of the Aggies' free throw tries and makes. Rice added nine points and Henry eight for NM State who finished with a narrow 26-25 edge on the glass against the Huskies.
• Cole pumped in 20 for the Huskies in their 2021-22 curtain call.
• NM State win was its first over a nationally-ranked team since Dec. 23, 2017. That day, Jans led the Aggies to a 63-54 win over #6/7 Miami in the Hawaiian Airlines Diamond Head Classic.

COMING UP NEXT
• Dancing on into the second round of the 2022 NCAA Tournament, one of American's favorite college basketball teams continues its magical run Saturday. NM State will face off against fourth-seeded and #17/18 Arkansas at the KeyBank Center at 6:40 p.m MT. Like the Aggies' first-round matchup with the Huskies, TNT will carry the second-round clash between NM State and #17/18 Arkansas. Brad Nessler, Brendan Haywood and Evan Washburn are set to be on the call.