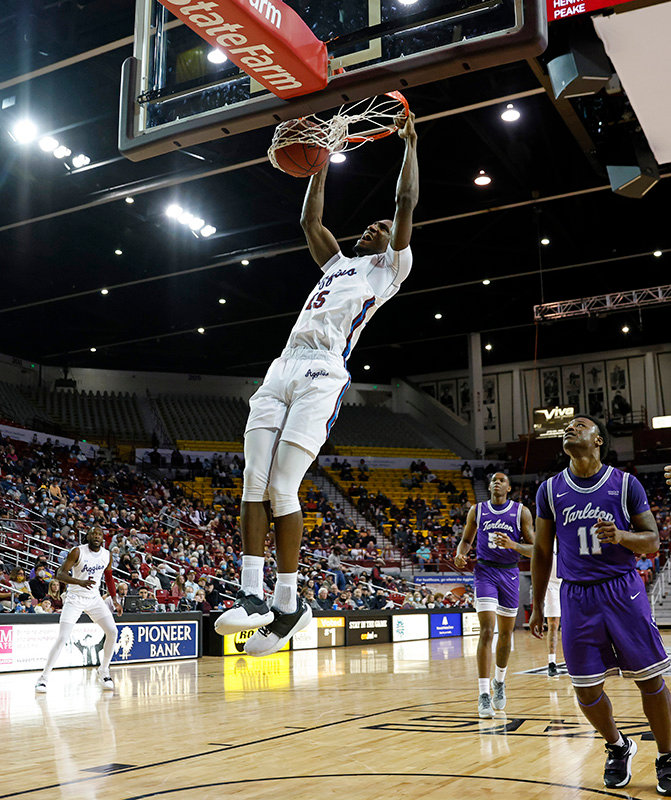 All week long - well, all year long, really - defense was the calling card for Tarleton and the thing it did best.

NM State would be sure to have its hands full against the Texans' gnashing, ball-hawking, hard-nosed defense. Billy Gillispie's club used they defense to keep things close and steal some impressive WAC wins heading into Thursday night's clash featuring two of the top three teams in the league standings.

Once inside the Pan American Center, there was indeed a devastating dose of defense delivered. It was dished out, though, by the home team.

Teddy Allen and Clayton Henry turned in 15 points apiece, Mike Peaks added a season-high 12 more markers and the NM State men's basketball team ratcheted its defensive intensity up by a considerable margin in the second half to blast Tarleton, 73-57.

The win - NM State's ninth in a row - kept the Aggies perfect in WAC action and stopped the Texans' two-game winning streak.

FIRST HALF
• Things couldn't have gone better for the home team who was greeted with a student-driven crowd for the first time in 2022. NM State opened the game on a 10-2 run over the first 3:08, getting a pair of downtown hits from Jabari Rice on two of their first three possessions.
• Teddy Allen knocked down another three - the third of NM State's four in the opening 20 minutes of action - to make matters 15-7 in favor of the hosts. Following that bucket with 14:34 on the clock, though, the Texans made their move.
• Tarleton reeled off 12 of the game's next 16 points over a stretch of 6:17 to knot matters up at 19-all. It was Montre Gipson leading the charge for the WAC upstarts as he nailed a pair of long balls through that scoring surge to bring the visitors even. Noah McDavid connected on another two buckets - both of the two-point variety - to help the Texans diversify their offense as they made a bid for the lead.
• That lead, however, never was obtained by the visitors. NM State broke the game's first tie since 0-0 with a multitude of hard-nosed drives to the tin, responding with eight unanswered points in the process. Donnie Tillman manufactured the first of four-straight NM State field goal makes with a finger-roll finish at the front of the rim before Allen and Mario McKinney Jr., followed suit.
• Allen capped the Aggies' 8-0 run with another layup, extending the hosts' edge to 27-19 with 3:38 to go in the first stanza.
• The Texans closed to within three points on another Gipson three-pointer with 1:28 left, but NM State answered in kind as Clayton Henry hit nothing but net on a corner three-pointer as 42 seconds shimmered on the clock. McKinney Jr., hit two of his three foul shots with 0.5 seconds left, staking the Aggies to a 35-29 lead at the break.
• Gipson finished with 14 in the frame for Tarleton, but eight of the nine Aggies who saw the floor in the frame came up with points to counter the Texans one-man scoring show. NM State shot an even 50-percent (14-of-28) and owned a 20-12 edge in points in the paint to enjoy its halftime lead.

SECOND HALF
• Henry hit another three to open the scoring in the second half, but Tarleton still wouldn't go away. Gipson continued his assault on the Aggies' defense, draining a mid-range jumper to pull the visitors within four, 44-40, with 13:24 to go.
• Right after the aforementioned make from Gipson, NM State began the process of putting the game away. Tired of the Texans hanging around, the Aggies landed their knockout blow in the form of a 19-3 run over a span of just 3:58.
• The long ball was a friend of the Aggies and the Texans' most insidious enemy through NM State's massive run. Allen hit one three, Henry and McKinney Jr., added one each while Mike Peake discovered his long-distance touch by draining two more as NM State poured it on.
• Following Peake's second three-pointer with 8:23 left, NM State's lead stood at 63-43 which effectively ended things.
• Virshon Cotton joined the three-pointer party in the second half, too, swishing a corner triple to hike the hosts' advantage to 24, 69-45, with 5:46 to go.
• NM State's lead didn't dip below 16 points for the remainder of the night as it cruised to victory.
• Though the Aggies' offense operated at a good clip of 46.4-percent (13-of-28) for the final frame, it was their defense which stole the show. NM State allowed the Texans to shoot just 7-of-28 (25-percent) in the last 20 minutes and nearly half (12) of Tarleton's 28 second-half points came from the free throw stripe.

KEY PERFORMERS/STATISTICS OF NOTE
• Henry's 15 points were a welcome sign for NM State faithful as the Calgary, Alberta, Canada, product made his first appearance in the starting lineup this season. After dealing with four separate injuries since the start of the 2019-20 season, Henry looked like the guard of old and finished 5-of-7 from the field to go along with two rebounds and a pair of assists.
• Allen added six boards and a trio of steals to go along with his 15-point night. Though Rice finished with six points and missed his final nine field goal attempts of the night, he contributed in other areas. The Houston, Texas, product skied for a game-high nine rebounds while also dishing out a game-high four of the Aggies' 16 assists.
• NM State shot 12-of-28 (42.9-percent) from three-point range. That percentage was the Aggies' second-highest in a single game this season, bested only by a 44-percent showing in a non-conference win over Davidson back on Nov. 18.
• Outside of Gipson, the Texans' couldn't unearth much offense. Tarleton's top scorer finished with a game-high 23 points on an 8-of-20 effort from the field, but just one other Texan (Hicks with 10 markers) contributed more than six points.
• The Aggies owned the paint, using a 28-18 edge in points there to get the job done. They also edged the Texans on the glass by a 36-27 margin. Though NM State committed 17 turnovers, Tarleton manufactured just four points off of them.
• NM State improved to 3-1 all-time against Tarleton which included a perfect 2-0 showing in games played in Las Cruces.

COMING UP NEXT
• Two opposing streaks - one of the losing variety and another of the winning sort - are what the next contest in the Pan American Center will feature. NM State will put its nine-game winning streak on the line against an Abilene Christian squad which is looking to put an end to a three-game skid when the two squads oppose one another Saturday afternoon at 4:00 p.m. on the Aggies' home floor.

Another rival tour threatens PGA, this time from Saudis and Greg Norman