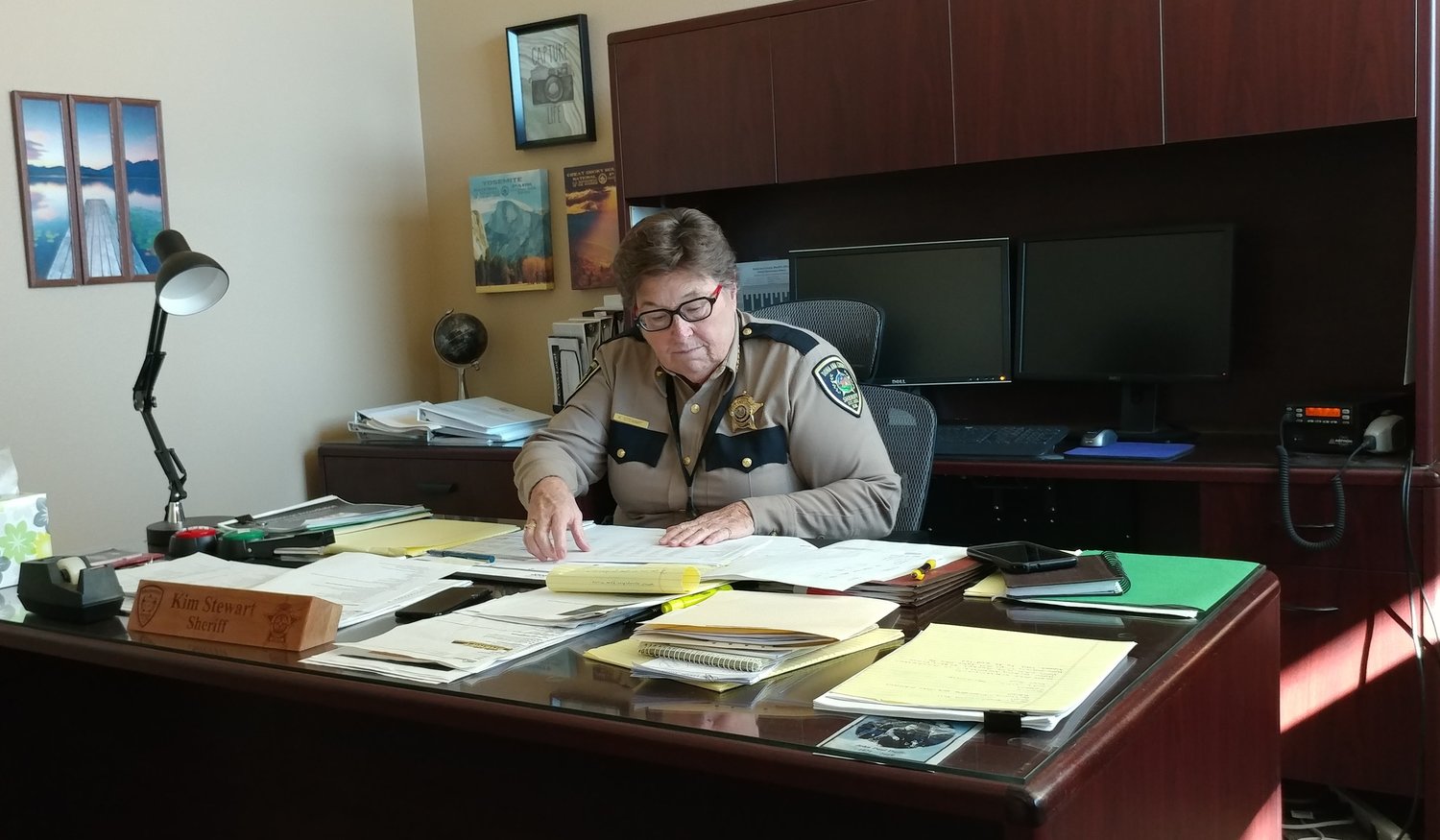 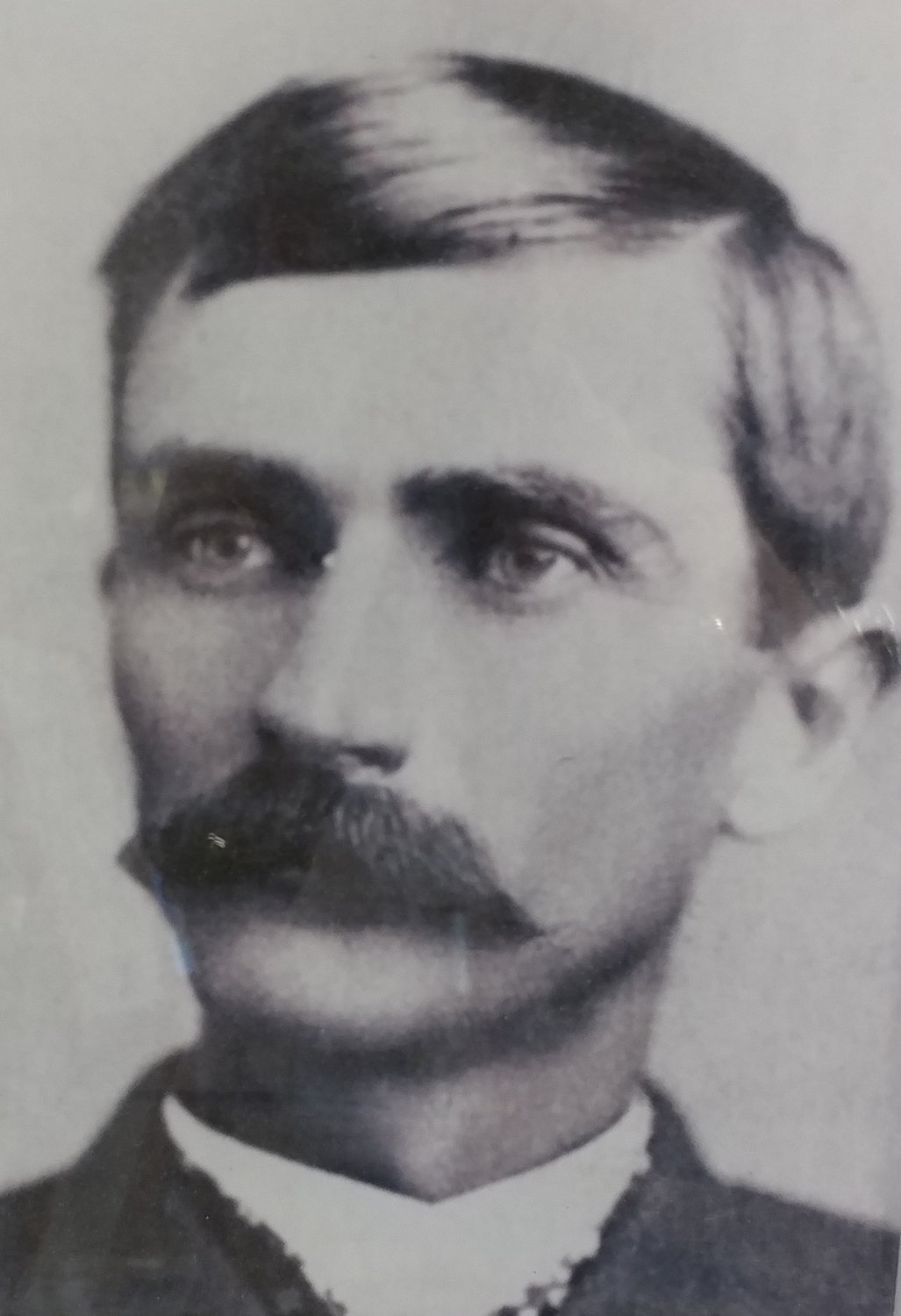 A photo of Pat Garrett hangs in the Historical Museum of Lawmen inside the Doña Ana County Sheriff’s Office, which is part of the county government center at 845 N. Motel Blvd. The museum is open 8 a.m.-5 p.m. Monday-Friday and 10 a.m.-2 p.m. the second and fourth Saturdays of each month. There is no charge to visit the museum, which has pictures of county sheriffs dating back to 1852.
Previous Next
Posted Friday, January 24, 2020 12:36 pm
Sheriff has one more community meeting coming up

Doña Ana County Sheriff Kim Stewart is continuing her series of meetings throughout the county during the month of January with a meeting from 6-7 p.m. Wednesday, Jan. 29, at Delores Wright Community Resource Center, 400 E. Lisa Dr., in Chaparral.

Meetings earlier this month were scheduled in Hatch, Las Cruces and Anthony.

The meetings are “to update residents on accomplishments during (Stewart’s) first year in office and plan for 2020,” according to a county news release.

Stewart said she and county sheriff’s office staff hosted or attended more than 200 community events in 2019.

“The hitching post out front has been taken down,” Doña Ana County Sheriff Kim Stewart said, reflecting on her first year in office.

“We cannot afford the luxury of policing like it’s 1990,” Stewart said. “We need to move forward dramatically. This mom-and-pop attitude should be relegated to history.”

The Doña Ana County Sheriff’s Office (DASO) “is a $20 million business,” the sheriff said. “We need to act like that.” Changes at DASO in 2020 are “going to be a shocker to this county government and this county.”

Stewart said there was “no historical reference for four years” when she became sheriff. “It was almost like there was a time warp,” she said. Without a verbal or written transition from the previous administration, Stewart said she inherited “a blank slate.”

Here is what the sheriff had to say about a number of issues after her first year in office:

The “bad image” of DASO that Stewart said she inherited “has changed dramatically, she said. “We are the place people want to go. Our people have gone out and told others this is a good place to work.”

Stewart said she is working to create “a consistency of service” within DASO so “employees are not subject to the whims of elections” and to ensure a consistent level of service, which she said “should be the same no matter who’s the sheriff, because we’re enforcing the law. How much can you change that?”

Stewart said she has built DASO morale by encouraging employees to ask questions and voice concerns.

“By asking questions, you’re not threatening me,” she said. “Please tell me if there’s a problem,” adding that she has told her staff. “I won’t kill the messenger.”

Stewart said she has supported deputies working in the field to “do their jobs.”

Stewart said she alerts the commission chair and County Manager Fernando Macias in the event of an emergency, and she said she needs commissioners’ support “with regard to the budget” and she welcomes and encourages their feedback.

But in terms of the day-to-day operations of the sheriff’s office, Stewart said, “I don’t see how interface is really needed.”

On other issues, like bail reform, they are silent. “Where are the sheriffs’ voices on that?” she asked. “I hear nothing. I don’t align with them because I don’t see them as broad enough thinkers.”

Stewart said she has more in common with New Mexico chiefs of police, who tend to be better educated and more cutting edge than county sheriffs.

“More people need to be aware of what an asset he is,” she said. “He’s a guiding light (and) a wealth of information.”

Working with all law-enforcement officials throughout the county is vital for DASO, Stewart said. “I need every single one of those people if, God forbid, something big happens here. I’m really serious about working together. I think after a year, we’re incredibly in sync.”

“Our challenge is much more dispersed,” Stewart said, because criminals are constantly “moving around the county. We have to police like it’s 2020. We have to process facts, find correlations. We have to look at whose committing our crimes.”

That doesn’t mean profiling, she said, but it does mean focusing on repeat offenders.

“One or two significant arrests is a big deal,” she said, adding that community policing – reaching out to and working with residents in every part of the county – is an important part of that effort.

Identifying drug users and first-time offenders with addiction issues is an important part of fighting crime, Stewart said, because that can help those individuals get the help they need and get them out of the criminal justice system.