Honoring the memories of those who gave all in service 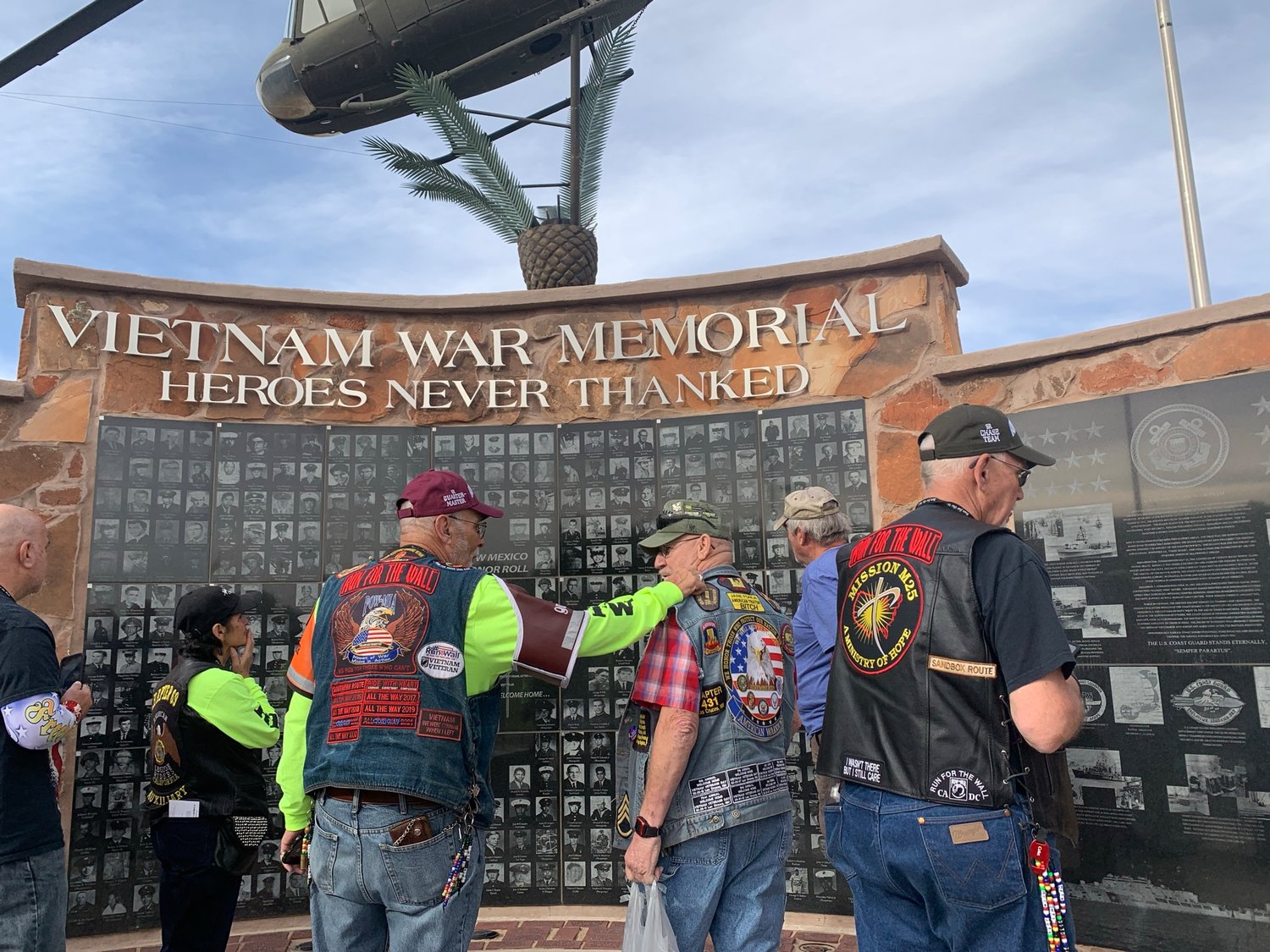 The Run for the Wall cross-country motorcycle run comes through Las Cruces Friday, May 20, and stops to participate in a wreath-laying ceremony at the Vietnam Veterans Memorial at Las Cruces Veterans Park.
Bulletin photos by Elva K. Österreich 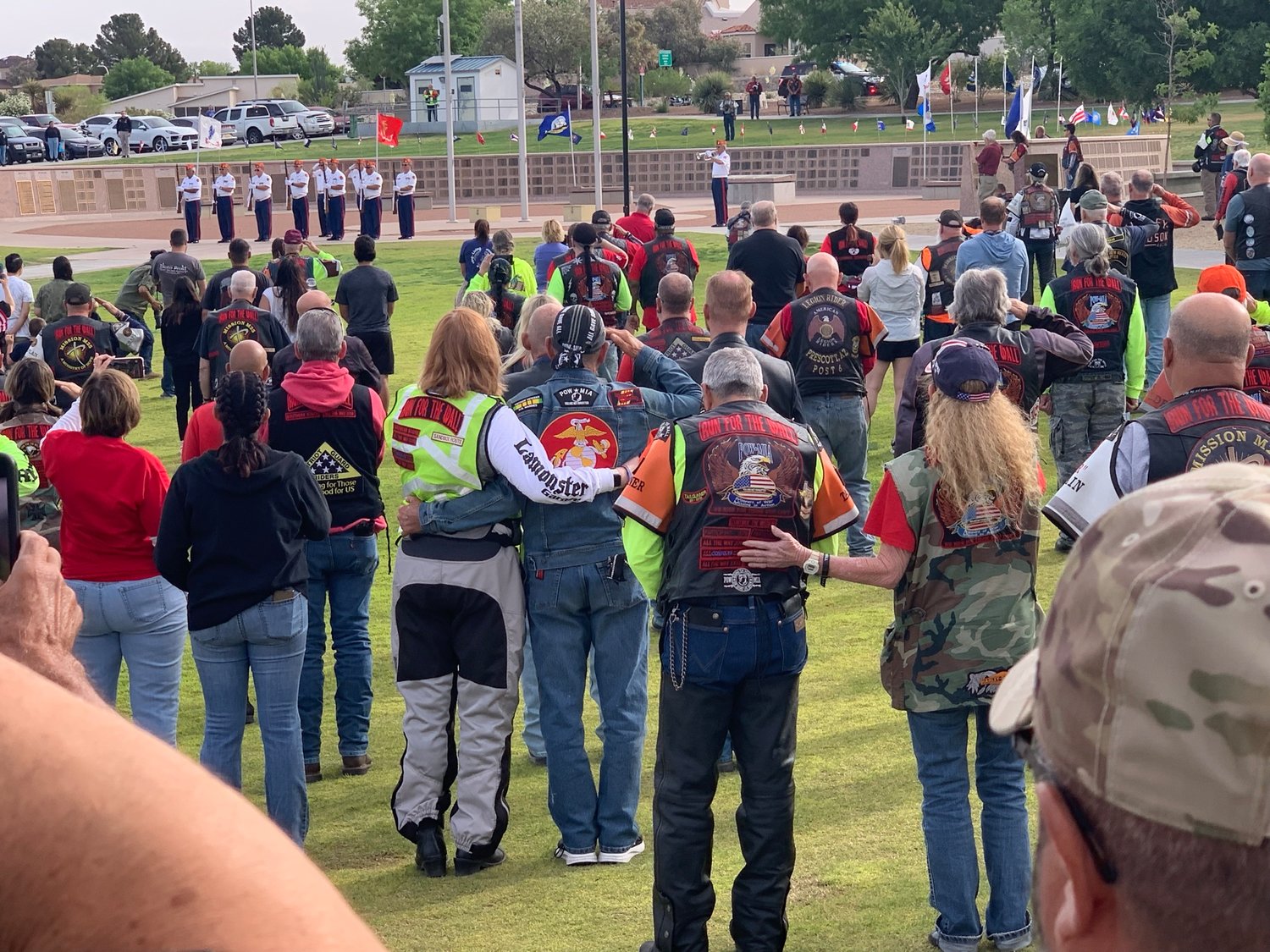 The haunting notes of taps float over Las Cruces Veterans Park as participants of the Run for the Wall cross-country motorcycle ride to Washington D.C. turn to honor the flag and say the Pledge of Allegiance.
Bulletin photos by Elva K. Österreich 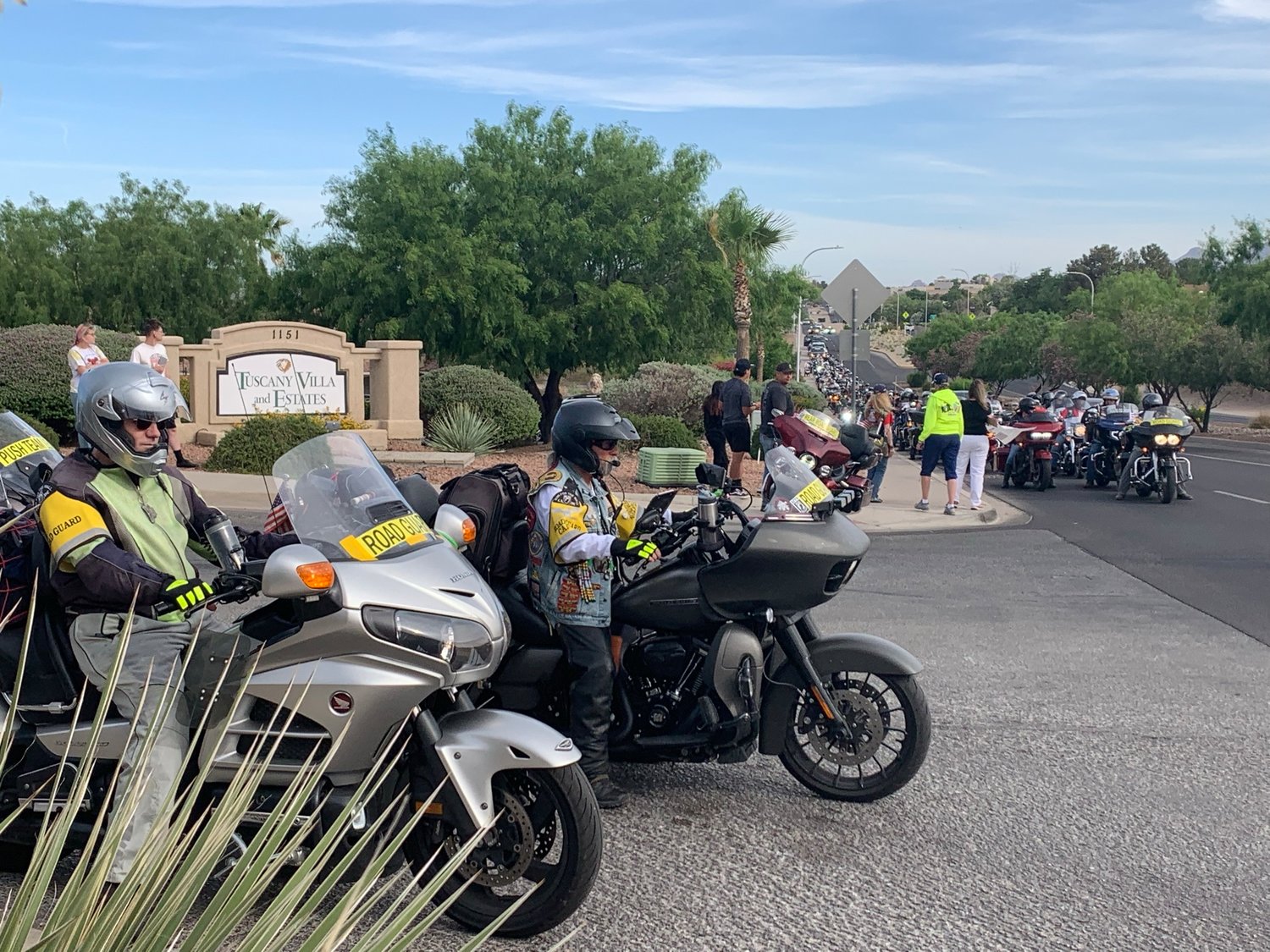 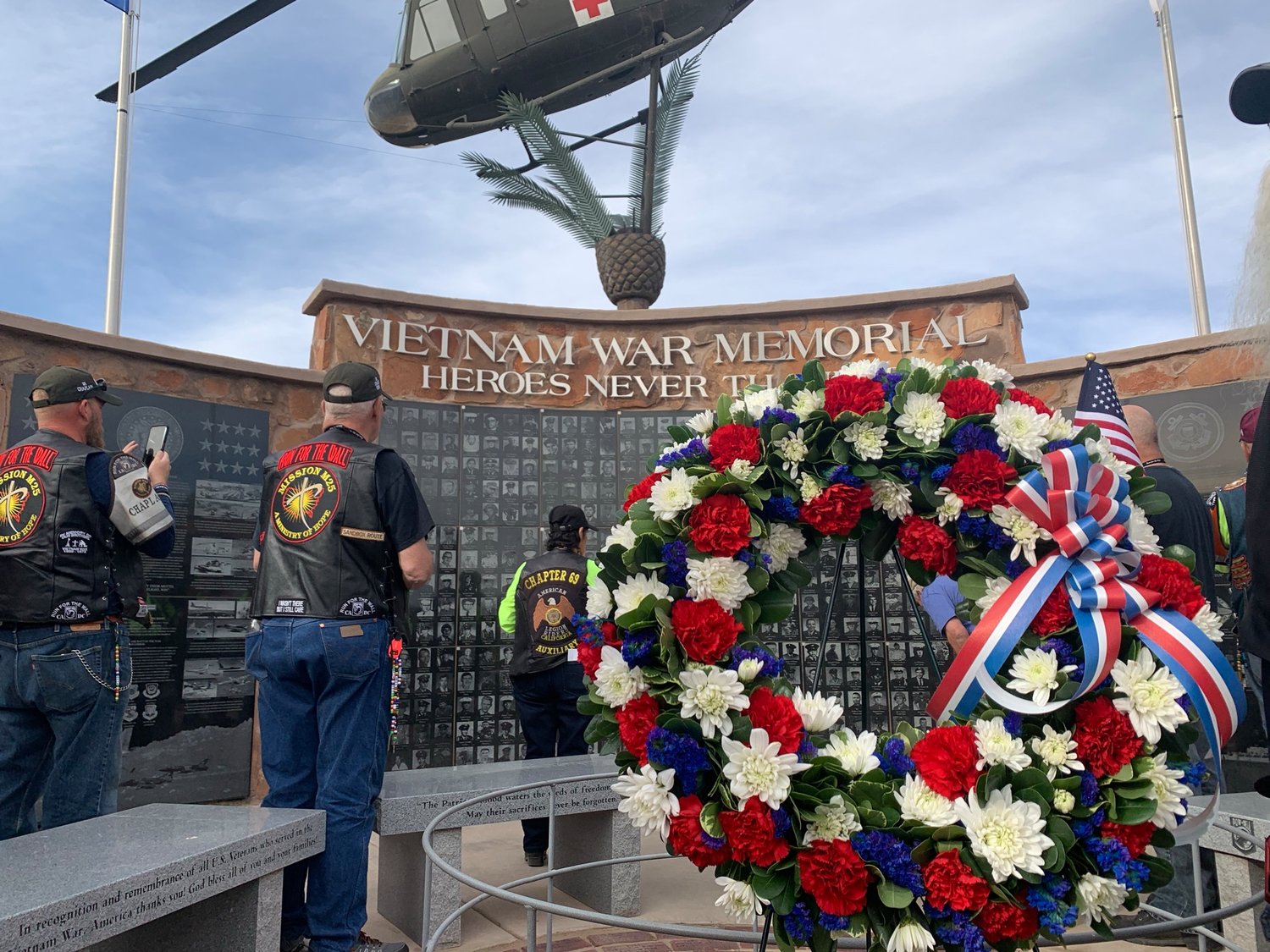 The Run for the Wall cross-country motorcycle run comes through Las Cruces Friday, May 20, and stops to participate in a wreath laying ceremony at the Vietnam Veterans Memorial at Las Cruces Veterans Park.
Bulletin photos by Elva K. Österreich 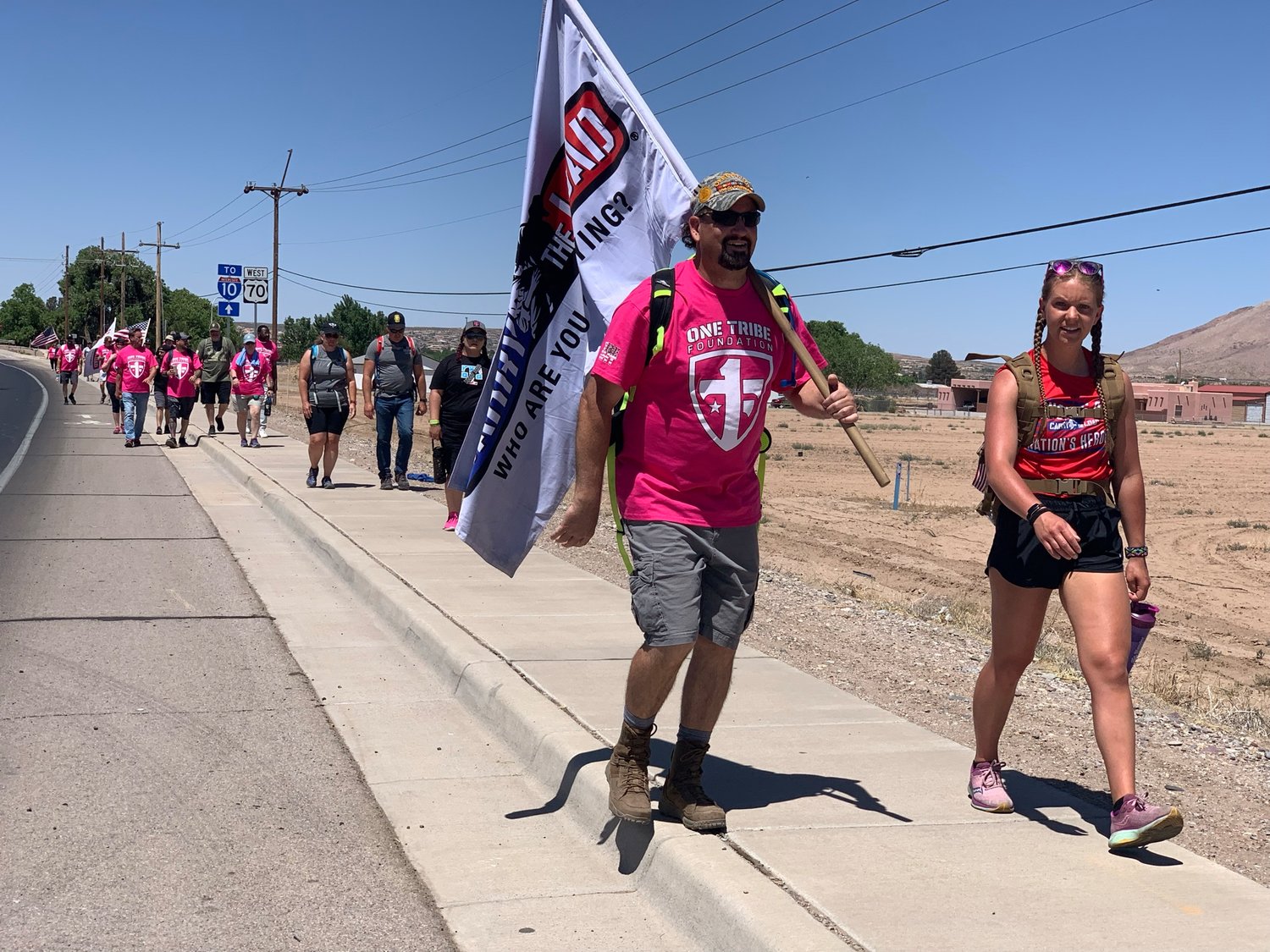 More than 20 individuals from the area do the Tuesday, May 17 Carry the Load segment along Picacho Avenue. The event takes walkers (and bicyclers) across the country with teams from various communities taking turns to honor armed service members and law enforcement officers who have given their lives in service.
Bulletin photos by Elva K. Österreich
Previous Next
Posted Tuesday, May 24, 2022 12:50 pm
By Elva K. Österreich Las Cruces Bulletin

This year, the members of the Purple Heart group will be putting the candles on the Veterans Memorial Wall, but there is no public ceremony said committee member Rod Gajewski.

The most recent of those names is that of Sgt. 1st Class Antonio “Rey” Rodriguez, 28, was killed while on a special operation in eastern Afghanistan on February 8, 2020, according to the Department of Defense. Rodriquez grew up in Las Cruces and graduated from Mayfield High School.

See page 32 of this issue of the Bulletin to see a list of people from the region who were lost in battle.

Passing through Las Cruces on missions to honor those who have served, two groups made their way across country last week. On Tuesday, May 17 Carry the Load walkers visited Las Cruces. They cross the country to “restore the true meaning of Memorial Day,” according to their website. And on Friday, May 20, close to 400 Run for the Wall motorcycle riders on the “southern route,” stopped at the Las Cruces Veterans Memorial Park to join in a wreath laying ceremony at the Vietnam Veterans Memorial. Run for the Wall terminates in Washington DC at the Vietnam Veterans Memorial.