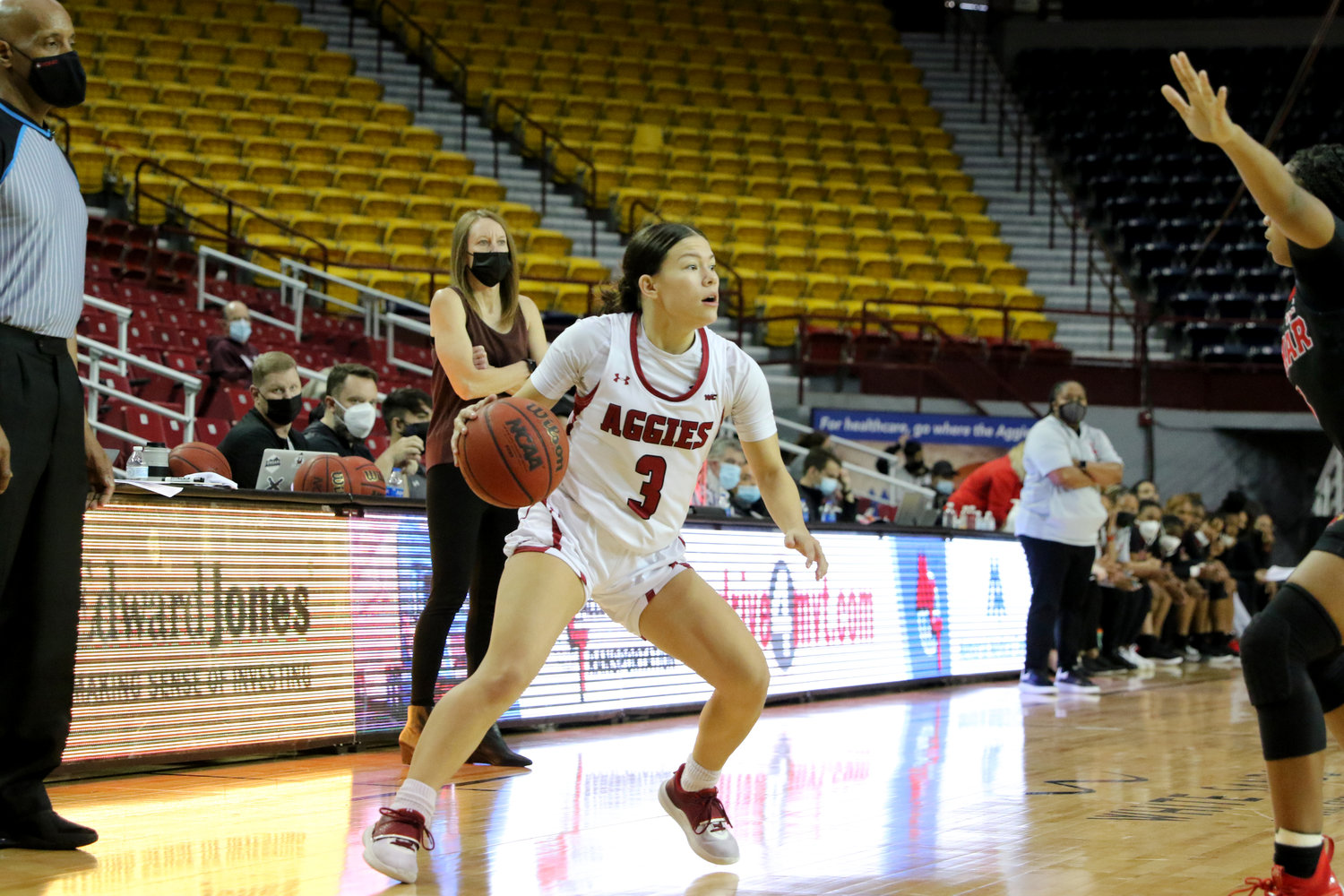 The first WAC competition of the year resulted in a win for the Aggies as Brooke Atkinson's squad was able to hold on and defeat WAC newcomer Lamar, 57-53. With the victory, the Aggies move to 5-6 on the season and 1-0 in conference play.

Led by redshirt sophomore Mel Isbell's 13 points, the Aggies emerged victorious in an early-week matchup with the Cardinals. Isbell was locked in from deep as she finished the game 3-of-4 from beyond the arc. Bigue Sarr also reached double-digits, totaling 10 points to go along with eight rebounds. Fellow big Deja Terrell was also effective down low as she snagged 10 rebounds and scored eight points for the Aggies.

FIRST QUARTER
The Aggies were a little slow out of the gate as the Cardinals outscored the Crimson and White, 8-2, in the first 4 minutes and 20 seconds of play. A Mel Isbell three-pointer followed by a Molly Kaiser pull-up jumper then reduced the Lamar lead to just one point with 3:50 remaining. Lamar answered with a run of its own as it went ahead 14-7 with just over two minutes to play in the opening period. The Aggies immediately went down low to graduate transfer Bigue Sarr who split a double-team to score her first points of the game. Lamar's Angel Hastings connected on a pair of three-pointers to lead all scorers with six points and help the Cardinals head into the second quarter ahead by six.

SECOND QUARTER
Dallas native Deja Terrell was the story to open the second quarter as she scored six points in the first three minutes to cut an eight-point Lamar lead in half and set the score at 15-19 with 7:28 to play in the first half. Lamar's Akasha Davis then scored at the 2:44 mark to give the Cardinals their largest lead of the day as they went ahead 29-19. However, Davis' made basket would be Lamar's final points of the half as the Aggies finished the quarter on a 7-0 run to cut the deficit to three points heading into the locker room.

THIRD QUARTER
After a successful Lamar possession put the Cardinals ahead 31-26, the ball found a wide-open Mel Isbell on the left wing and she saw her third three-pointer of the game fall through the basket. Isbell's triple cut the Cardinals' lead to just two. The momentum seemed to swing in the third as the Aggies found their first lead of the contest with 6:14 on the clock in the third quarter as they pulled ahead 35-33 thanks to back-to-back made baskets from Bigue Sarr. Jade Bradley then followed Sarr with a six-point run of her own to give the Aggies a 41-33 lead. The Aggies continued to pour it on as they opened the third quarter on a 15-2 run. Lamar then responded with six unanswered points to pull within two entering the final quarter.

FOURTH QUARTER
Junior Shania Harper combined with Taylor Donaldson to assist the Aggies in opening the fourth quarter with a 6-2 run before Lamar answered with a 6-0 run of its own to even the score at 47 with just over five minutes left in regulation. The play of the game undoubtedly came at the 4:12 mark in the closing quarter as Isbell forced a turnover in the backcourt, dove on the floor to secure the steal and then found a cutting Sarr for a layup that put the Aggies ahead 51-47. From then, the Cardinals would get no closer than three points as the Aggies earned the four-point nod to start conference play.

UP NEXT
The Aggies continue league play with a road matchup versus Tarleton on Thursday evening. Tip-off is set for 5 p.m. (MT) in Stephenville, Texas.