From 1-3 to state’s final four 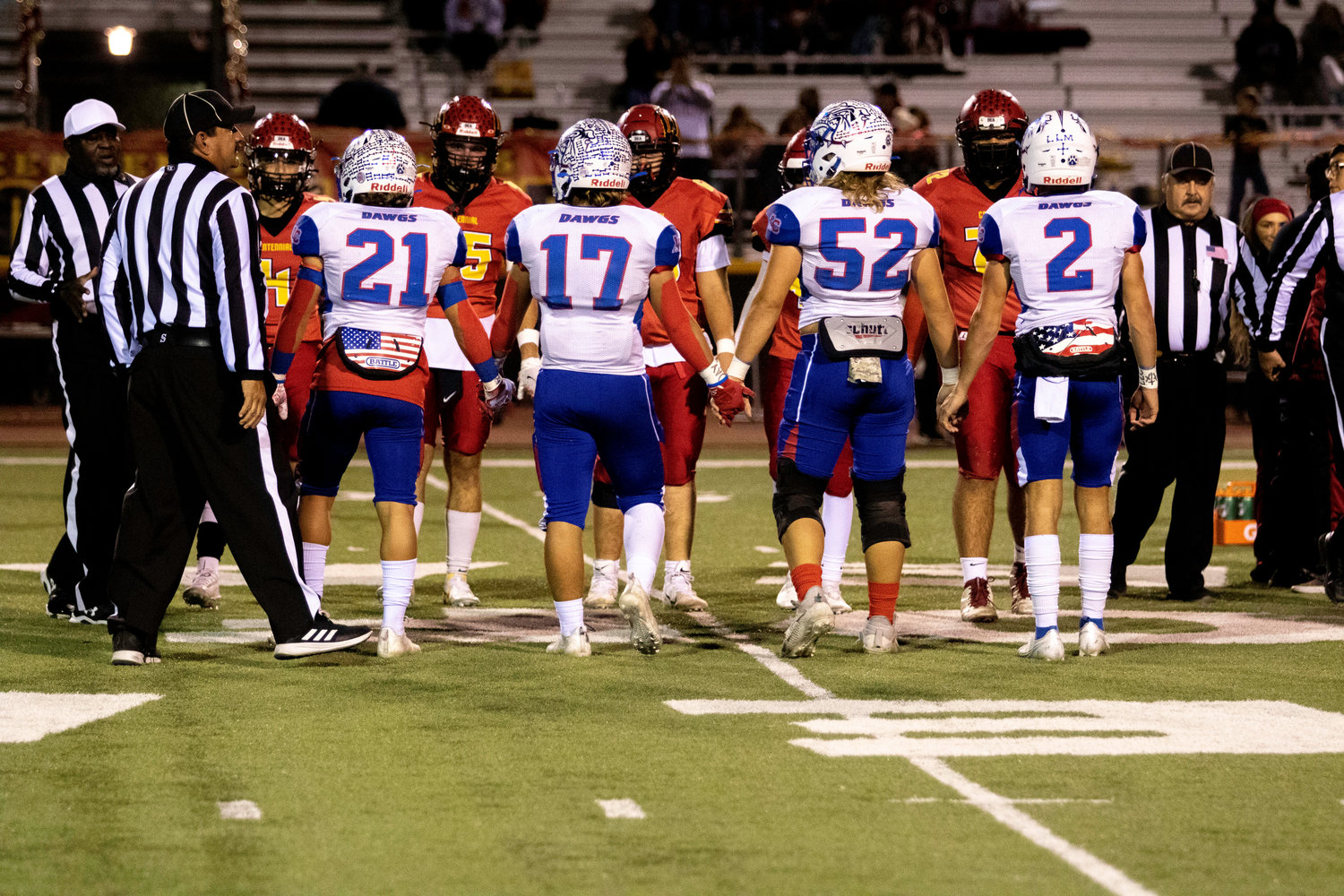 Togetherness and building a family atmosphere have been keys to the success of Las Cruces High football over the years and this year was no exception. Here Bulldawq players hold hands before the kickoff of their rematch with Centennial during the second round of the state 6A playoffs
Tabitha Rossman
Posted Tuesday, November 23, 2021 8:50 am
Dave Burge

Not many people outside of the Las Cruces High School football program thought Friday’s state 6A quarterfinal against Cleveland High of Rio Rancho would be much of a game.

When the visiting Storm stormed out to a 35-7 lead with about a minute to play in the first half Friday night, Nov. 19, at the Field of Dreams, it looked like conventional wisdom and all the naysayers might be right.

So what did the Bulldawgs do?

They turned to their formula for overcoming adversity that they have been using all season long – focus on the next play.

“If we do the next play well, good things will happen,” Las Cruces coach Mark Lopez said. “And those good things start piling up. That’s exactly what happened. These guys did a great job of refocusing on what was in front of them and started making some plays and made it a heck of a game down the stretch.”

Las Cruces scored a quick touchdown and then a field goal after recovering a squib kick that was misplayed by Cleveland and went into halftime down 35-16.

The Bulldawgs then held the high-flying Storm offense scoreless in the third quarter and scored a touchdown themselves and a two-point conversion to cut the lead to 35-24 with about three minutes to play in the third.

But that was as close as Las Cruces could get and the Bulldawgs ended up seeing their season end with a 42-24 loss in the final four for big school football in New Mexico.

“This is what they have done all year; it’s the same thing for our season,” Lopez said. “They haven’t had any quit in them all year. They are just high character kids.”

Las Cruces, which finished 7-5 overall, started out the season 1-3, a disappointing start for a program with such a rich tradition. The Bulldawgs let a 27-point lead slip away in a mid-season showdown with crosstown rival Centennial and lost 42-41 in a game that decided that district championship.

But Las Cruces has had a way of bouncing back, showing a ton of grit, character and togetherness throughout the season.

They beat Clovis 42-7 in the opening round of the playoffs and then beat Centennial in the rematch 35-21 to reclaim the mythical city championship.

It all adds up to a memorable season.

“We are not into moral victories here; we are into state championships,” he added. “But I couldn’t be more proud of a group for their persistence and relentlessness they showed.”

Lopez said that the Bulldawg program likes to think of itself as a big family – players, coaches and actual families.

“You spend so much time together,” he said. “So many hours working, sweating and bleeding together.”

Like all high school football teams in New Mexico, Las Cruces had a short time to prepare for this fall season, after playing last spring because of the Covid pandemic. The Bulldawgs, like everyone else, also had to navigate all the Covid protocols and figure out how to play a season in these unprecedented times.

“What an incredible job by these coaches, these kids, their families in staying persistent in what they do,” Lopez said. “You come back and are a play or two away from winning a district championship. You come back and avenge that (loss to Centennial) in the playoffs and punch your ticket to the quarterfinals and are one of the best four teams in the state.”

For Las Cruces, the journey may have come up just short of the ultimate destination, but it will be something that everyone associated with the team will long remember.

“That is why high-school football is so special,” Lopez said. “It is a bond that these kids will never lose.”