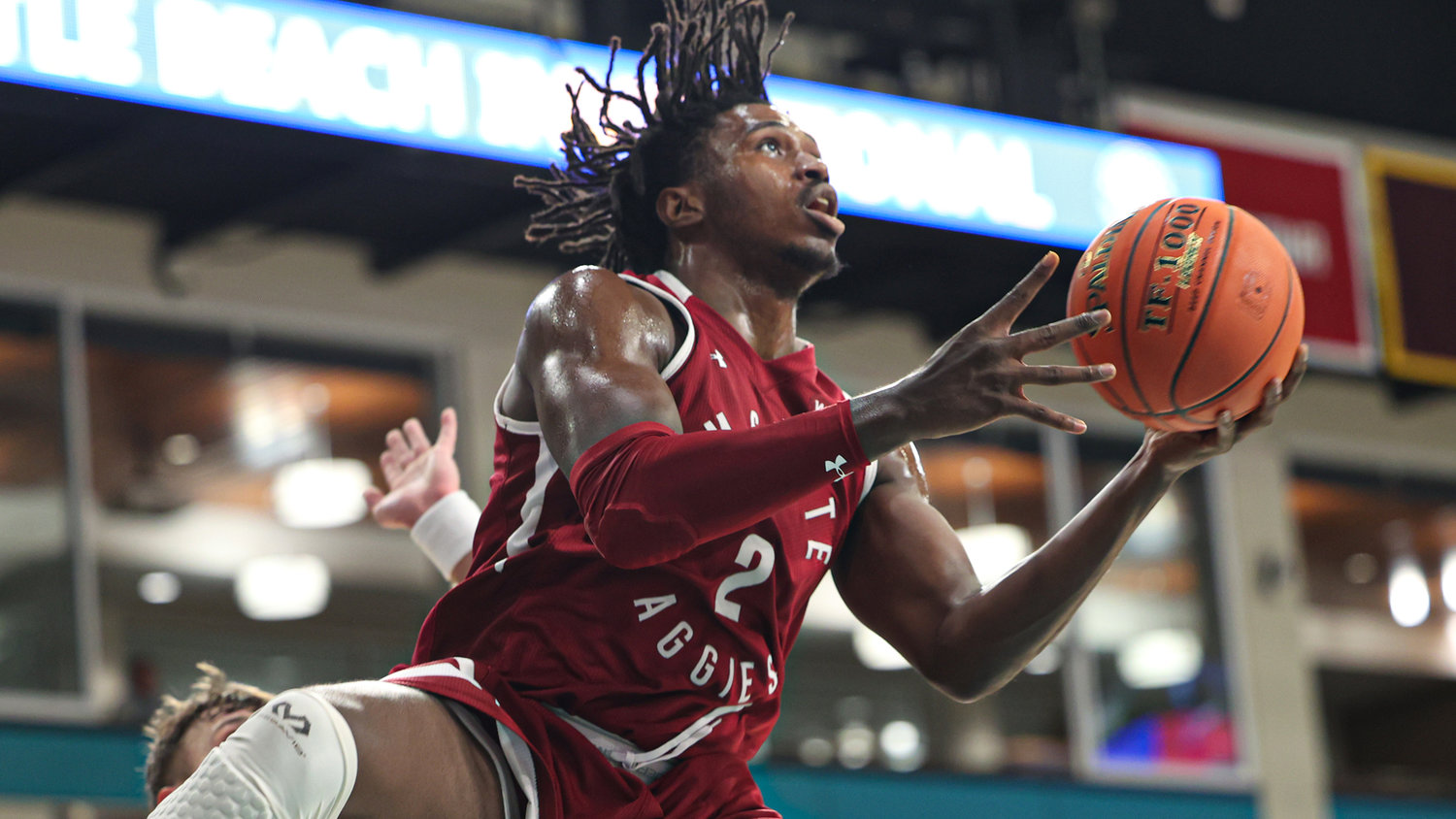 Casting aside a forgettable Friday afternoon outing at the HTC Center, NM State got a big-time performance from senior Donnie Tillman who finished with a game-high 23 points and a monstrous game from Will McNair Jr., as the Aggies held off a late charge by Indiana State in an 80-66 victory.

The game, NM State's first against a current Missouri Valley Conference institution since 2018, was the last game of the 2021 Myrtle Beach Invitational and allowed the Aggies to claim a third-place finish at the event.

FIRST HALF• Coming out with the intensity they lacked Friday afternoon, the Aggies received scores from three different players through the first 2:11 to start the game on a 7-0 run.• Jabari Rice called buckets on a three-pointer with 13:04 left which hiked NM State's lead to nine, 16-7, before Indiana State cocked back and landed a counterpunch. The Sycamores clocked NM State with a 10-0 run through a span of 1:55 to take a 17-16 lead with 10:27 left in the half.• Micah Thomas put in five points through that scoring surge and the Sycamores' second-leading scorer, Cameron Henry, finished it off with a mid-range jumper which put NM State at a 17-16 disadvantage with 10:27 left in the frame.• Over the course of the next 3:39, NM State regained control. Levar Willams splashed a go-ahead three-pointer after Teddy Allen and Tillman each snared offensive boards to keep the Aggies' possession alive. Williams' fifth long ball since Friday represented the starting point of a 12-4 NM State scoring spree.• Tillman closed out the run with a hard-driving layup which hiked NM State's lead to 28-21 with 6:48 showing on the scoreboard.• Six of the Aggies' final eight points of the half came courtesy of Will McNair Jr., and NM State walked into its locker room at the break armed with a 41-31 lead.• Though Tillman's play shined through in the opening frame, there was no shortage of offense from nearly every NM State player who saw the court. Eight of the 10 Aggies who logged minutes in the opening frame put in points and NM State shot an impressive 53.3-percent (16-of-30) from the field.

SECOND HALF• Keeping its foot pressed firmly on the gas pedal, NM State came out in the second half with hopes of burying the Sycamores. The Aggies used a 17-7 run through the first 7:01 of the frame to take a 20-point lead (58-38).• Tillman turned in nine of NM State's 17 points through that surge including a posterizing one-handed driving slam dunk. Following that rim-rocker, Allen swished back-to-back three-pointers to push the Aggies' lead to 20.• A soft jumper from McNair Jr., with 9:21 left kept NM State's lead at 18, 63-45, but Indiana State made a bid for victory from there. Over the next 4:37, the Sycamores took off on a 17-5 run which cut NM State's once-massive lead all the way down to six, 68-62, with 4:44 to go.• Thomas had eight points for Indiana State during its run while Cooper Neese drained a three to whittle down the Aggies' lead a little more.• The final 4:14, though, saw NM State regain its composure. A 12-4 run by the Aggies through that final stretch prevented Indiana State from completing a major comeback.• Johnny McCants fed McNair Jr., and Rice for buckets on consecutive possessions which pushed NM State's lead back to double-digits, 75-65, with 1:46 left. A three-point play from McCants followed before Tillman sealed the deal by connecting on one last layup with 40 seconds left.

KEY PERFORMERS/STATISTICS OF NOTE• Tillman was the difference maker from start to finish for NM State Sunday night in the Palmetto State. His 23 points were not only a game-high, they also matched his highest scoring output in an NM State uniform. The Detroit, Mich., product finished with a 10-of-15 night from the field which included a 3-of-5 showing from long range.• McNair Jr., continued his strong start to the season by submitting his best statistical line as a collegian. The Philadelphian wrapped up his strong night by going for 12 points as well as a game and career-high 15 rebounds. Those totals helped him record his first double-double as an Aggie and he also dished out a team and career-high five assists.• In addition to McNair Jr., and Tillman, three other Aggies turned in double-digit scoring outings. Allen (12), McCants (10) and Rice (10) all finished with 10 or more points, making it the second time this season NM State had five players go for 10 or more points.• McNair's strong night on the glass helped NM State finish +15 in rebounding over Indiana State (38-23). With 13 defensive rebounds, McNair Jr., finished with six fewer defensive boards than the Sycamores did as a team.• NM State was perfect from the free throw line for the second-straight game. The Aggies have made their last 12 foul shots dating back to Thursday afternoon's Myrtle Beach Invitational opener against Davidson.• Indiana State's Henry neared triple-double territory in his team's second-straight setback. The guard racked up 10 points, a game-high seven assists and six rebounds while Thomas amassed a game-high 23 points in defeat.• The victory was NM State's first over a currently Missouri Valley Conference squad since Dec. 22, 2012. That day, the Aggies posted a 71-51 victory over Missouri State inside the Pan American Center.• NM State head coach Chris Jans improved to 7-1 in Sunday games as the Aggies' bench boss. The win was also his 99th as NM State's head coach.• The Aggies finished in third place in the eight-team Myrtle Beach Invitational. Utah State outlasted Oklahoma in the title game Sunday afternoon to win the invite.

COMING UP NEXT• NM State returns to Las Cruces for two consecutive non-conference bouts against foes from the Land of Enchantment. First up is a date with NCAA Division II adversary New Mexico Highlands who heads inside the Pan Am Center Wednesday evening at 6:00 p.m.