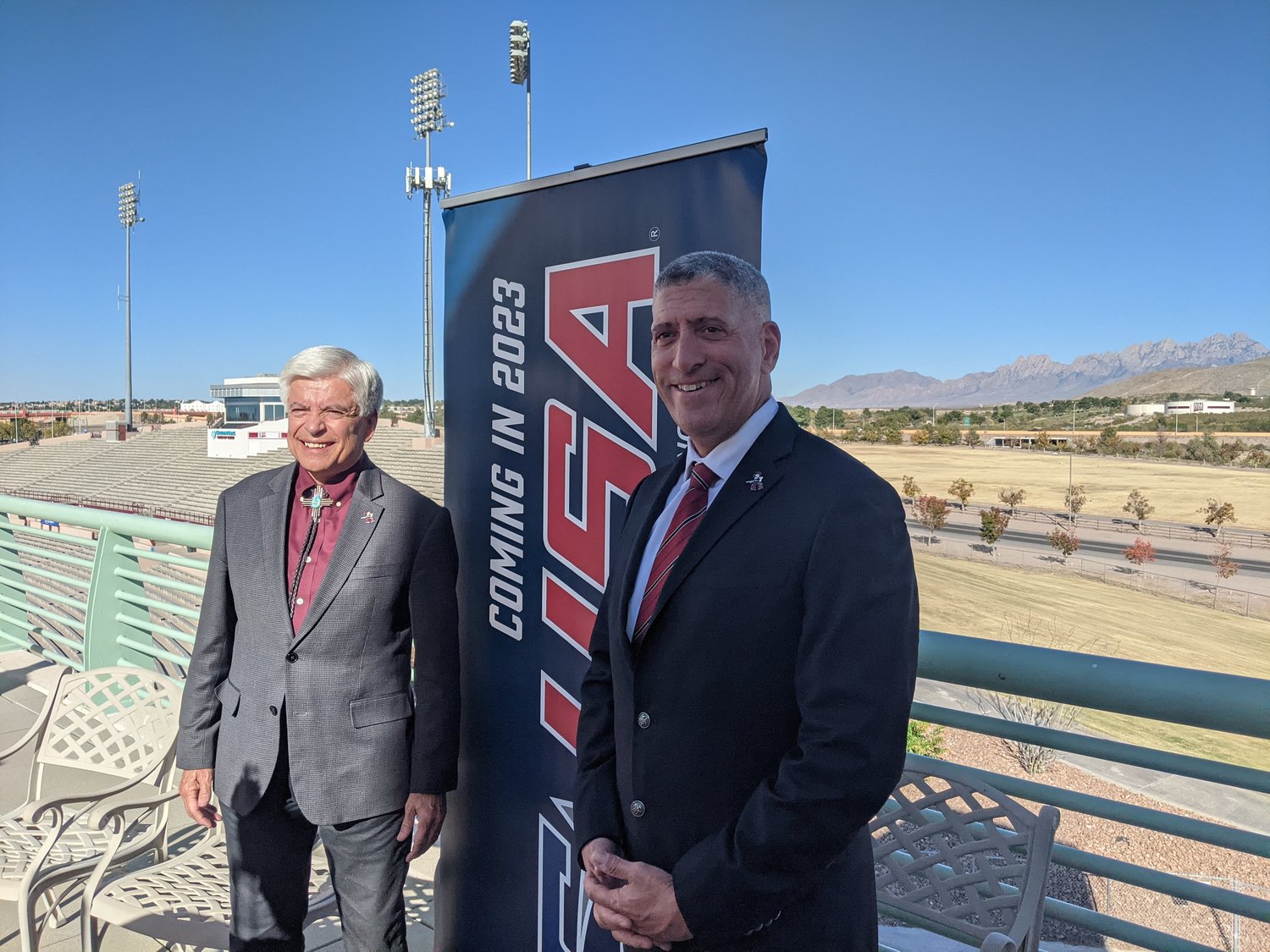 Friday, Nov. 5, the university announced that it had accepted an invitation to join Conference USA (C-USA) in all sports, starting in the 2023-24 school year.

“To be invited and accepted into Conference USA is nothing short of phenomenal,” said NMSU Athletics Director Mario Moccia during a news conference to announce the move.

“As a founding member of the college football playoff, it is unbelievable for us (to join C-USA) and sets us up on a great trajectory for the future, not just competition-wise but financially as well,” he added.

The Aggies have played as an independent in football since their last game as a football-only member of the Sun Belt Conference – the 2017 Arizona Bowl, a 26-20 overtime victory over Utah State and the school’s first bowl berth and victory in 57 years.

Since then, the football team has struggled. This year, the Aggies are 1-8. (See this week’s Bulletin sports page for more on NMSU’s current season).

NMSU has been a member of the Western Athletic Conference (WAC) since 2005 in all its other sports. And those sports, including men’s basketball, will also join C-USA in 2023.

The move will cost NMSU a $1.5 million entry fee to join C-USA, Chancellor Dan Arvizu said. The school will make an initial payment of $250,000 next year and then will make equal payments of $250,000 spread out of five years and that money will be taken out of future revenues generated by the conference, Arvizu said.

“A lot of things have gone into this event of the day,” Arvizu said. “We could not be more pleased. Obviously, the greatest part of this has to do with stability in our conference and giving us the opportunity to play all of our sports, FBS (Football Bowl Subdivision) football, in a conference we are very comfortable in.”

When asked if the move was worth it financially, Moccia said the Aggies will generate as much as five times the revenue being a member of C-USA as they did as an independent in football.

“Just from a business standpoint, the entrance fee and exit fee pale in comparison to what is down the road financially,” Moccia said.

Moccia also said that being a member of a conference will make it easier for the football program to recruit players and schedule games and NMSU will benefit from C-USA’s ties to multiple bowl games.

The Aggies also will be a member of the same conference with UTEP for the first time in more than 60 years.

“I am really interested in seeing how our fans react to that,” Moccia said. “We have been playing UTEP every year in basketball twice, in football and more or less in every other sport annually. It is not like a team that is close that we haven’t played before.

“Now if there is a conference championship on the line (between NMSU and UTEP), that will really ratchet up the experience for the fans,” Moccia added.

Moccia said the Aggies’ new conference will also benefit from having the school’s other sports programs, including men’s basketball, join it.

Arvizu also said the move to C-USA was a good fit and the conference and NMSU share the same commitment to academics, the wellbeing of their student athletes and strategic vision.

“I was persuaded that this is very much in line with the direction we want to head as a university,” Arvizu said.