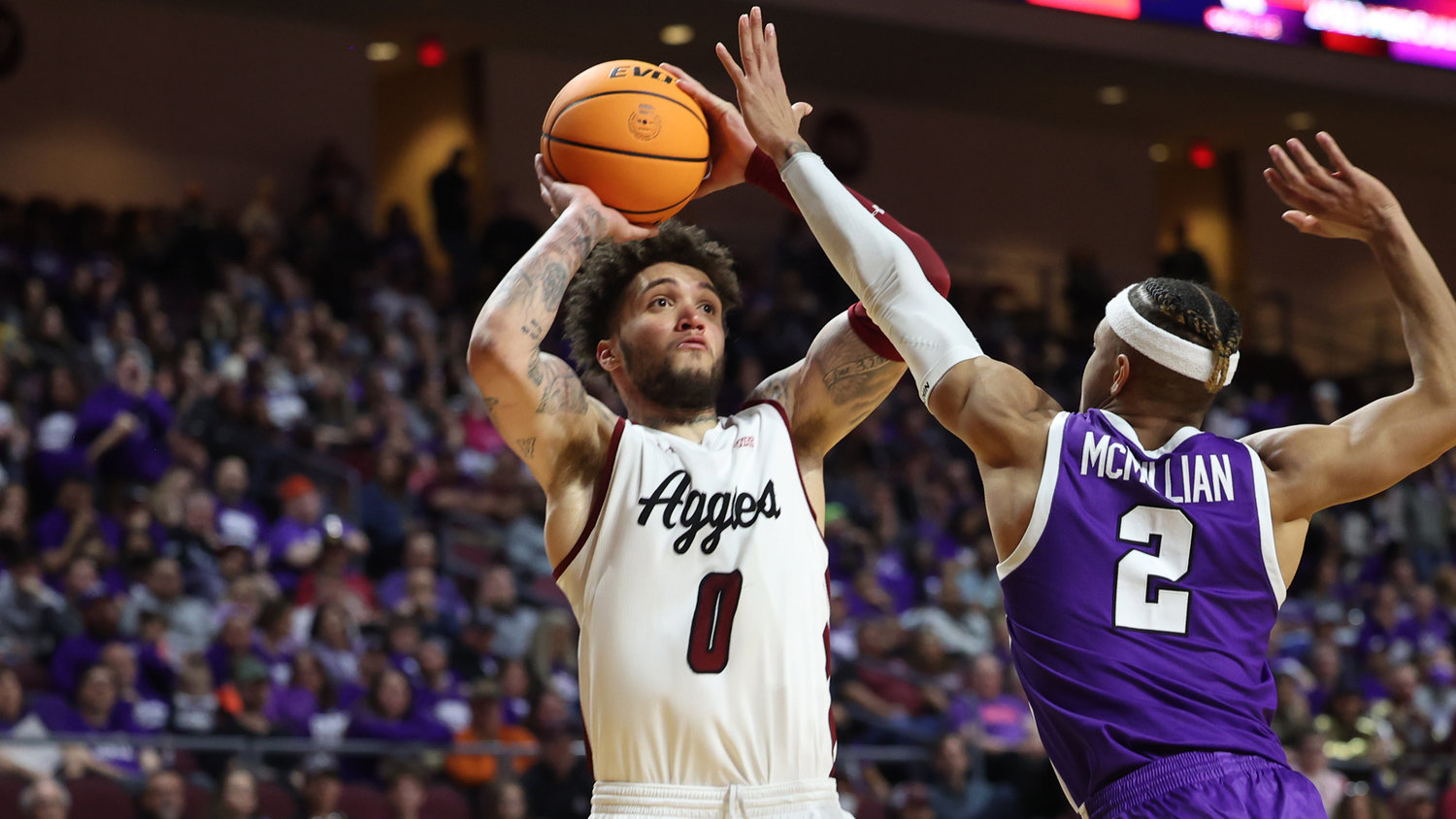 LAS VEGAS - Some memorable battles between NM State and Grand Canyon have graced the court at The Orleans Arena over the last-half decade.

Friday night marked the latest postseason chapter of the Aggies/Lopes series, but just like every other encounter between the two teams in the building, NM State put the clamps on Grand Canyon.

Teddy Allen and Jabari Rice combined for 56 points and the Aggies staved off a hard charge by fourth-seeded Grand Canyon in the final five minutes to score a 75-70 victory over the Lopes in the first of two WAC Tournament semifinals Friday night at Orleans Arena.

Free throw shooting came up big for the Aggies who reached the 25-win mark for the fourth time in the Chris Jans coaching era. NM State knocked down 76.9-percent (20-of-26) of its foul shots including all four in the final 19 seconds to seal the deal.

FIRST HALF• Yuat Alok and Rice fired in close-range makes in the first 87 seconds of the game, giving NM State a 4-2 lead.• Holland Woods, hoping to spring the upset, heated up early and put in seven of his squad's first eight points. His two free throw makes with 17:02 to go in the half gave Grand Canyon its largest lead of the game, 8-5.• Countering the play of Woods, Allen helmed a 10-2 NM State run with a pair of three pointers as well as two free throws at the 14:04 mark to put the Aggies ahead 15-10. Woods continued his hot streak, canning another long ball that trimmed NM State's lead to two before NM State clocked the Lopes with another run.• Will McNair Jr., and Mike Peake each hammered home dunks though a 9-0 surge by the designated home team. Allen finished off the run with two more swishes at the foul line to make matters 24-13 in favor of NM State with 11:43 on the clock.• Gabe McGlothan helped the Lopes get back into it, capping a run by Grand Canyon with a two-handed jam which made it a two-point game, 33-31, with 3:05 left in the half.• With frightening speed, NM State managed to push its lead back to double-digits. Rice hit a triple, got fouled and completed a rare four-point play with a free throw make with 1:57 left before Mario McKinney Jr., finished the 11-2 NM State run by banking in an alley-oop layup off of an assist from Allen.• Two more free throw makes from Allen in the last 44 seconds gave NM State a 45-37 lead at the break.• The Lopes jumped on the back of Woods who was all too happy to carry his squad through the entire stanza. Grand Canyon's hot-shooting guard pumped in 21 of his team's 37 points at the break while the Aggies used a more balanced backcourt attack to take a nine-point lead into their locker room.• Thanks to the duo of Allen and Rice who finished with 17 and 13 points respectively, NM State had the upper hand through 20 minutes. The former used an 8-of-8 effort from the foul stripe to help him add to his point total while the latter was a perfect 4-of-4 from the field during the stanza.• NM State shot .556/.500/.769 in the frame, not far off the Lopes' mark of .481/.417/.667.

SECOND HALF• Never in the first 11 minutes of the half did the Aggies appear in danger of losing control of things. McKinney Jr., gave NM State its largest lead of the game, 64-50, with 9:47 to go by banking home a hard-driving layup.• Peake split two free throws with 7:03 left, keeping NM State's lead at 12 (67-55) before Grand Canyon made a bid to get back to the championship game for the fourth-straight time. Using the play of Jovan Blacksher Jr., and McGlothan, Grand Canyon used a 14-4 run to make it a two-point game, 71-69, with 19 seconds left. Outside of Chance McMillan's two-handed slam to finish the run, Blacksher Jr., and McGlothan had all of the Lopes' points.• After getting fouled on an inbounds play, Rice calmly stepped to the foul line and made it a four-point NM State lead (73-69) with two free throw makes. Woods went 1-of-2 at the stripe on the ensuing Grand Canyon possession, but Allen came up with a big-time defensive rebound with six seconds left. NM State's leading scorer got fouled and swished a pair of freebies with six seconds to go, putting the game on ice for the Aggies.

KEY PERFORMERS/STATISTICS OF NOTE• Allen continued his personal victimization of the Lopes, going 12-of-12 from the free throw line to aid his 25-point performance. The Phoenix, Ariz., product added seven rebounds and a game-high six assists to his final tally.• For Rice, it was a return to form on offense for the Houston, Texas, product. The guard's 21 points came on a tidy 6-of-8 performance from the field and a similar showing at the foul line.• The showdown was the fourth between NM State and Grand Canyon in the WAC Tournament, but the first that didn't take place in the championship game.• NM State hit the 25-win mark for the 13th season in the history of the program. Four of those seasons have come in the Chris Jans coaching era, giving him the most by any Aggie bench boss in program lore. The only other NM State coach to match Jans' 25-win season total of four was the late Neil McCarthy.• Not only did the Aggies push into the WAC Tournament championship game, they secured another top-100 NET win. NM State currently has five wins over top-100 NET programs on the season - three against Grand Canyon, one against Davidson and another against Washington State.• After popping off for 21 points in the opening frame, Woods was limited to just three in the final 20 minutes of action. McGlothlan added 19 points while Blacksher Jr., totaled 13 on a 6-of-13 shooting performance. Second-chance points were in favor of Grand Canyon by a 13-6 margin and the lower seed also owned a 40-32 rebounding edge over the Aggies.

COMING UP NEXT• For the 10th-straight time, NM State has advanced to the WAC Tournament championship bout. Saturday night at 8:00 p.m. MT, the Aggies will take on either second-seeded Seattle U or sixth-seeded Abilene Christian for the right to move on to the NCAA Tournament for the 23rd time in program history. ESPNU and the ESPN app will carry that clash nationwide.