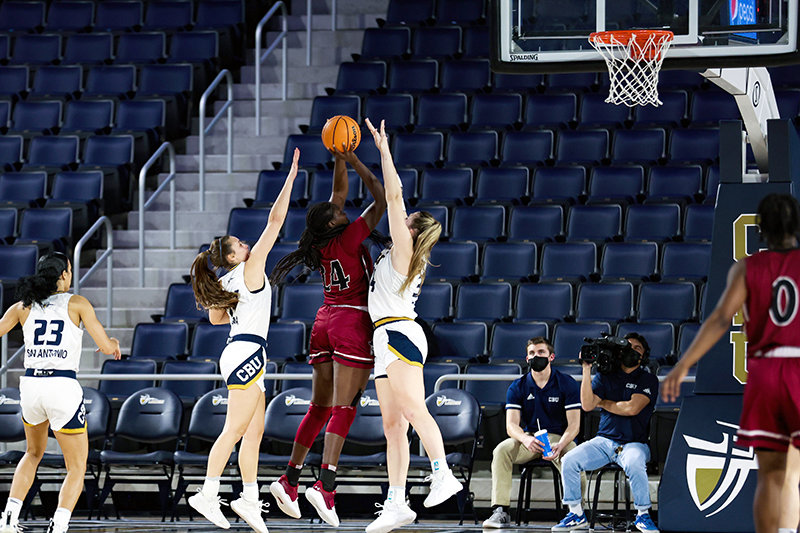 NM State's top point producer was Bigue Sarr who finished the contest with 13 points to go along with five rebounds in 18 minutes of playing time. Taylor Donaldson reached double-digits for the eighth time this season as she registered 12 points. For the second game in a row, the Aggies got three scorers in double-digits for the second-straight game as Shania Harper came off the bench to put in 10 points.

On the evening the Aggies shot just 33 percent while CBU finished the game shooting at a 56 percent rate. NM State did carry the advantage in the categories of second-chance points and bench points as they finished with 15 points off second opportunities and the bench posted 43 of the Aggies' 64 points.

The Lancers' tandem of Trinity San Antonio and Caitlyn Harper combined for 32 points to lead the way as San Antonio finished with 20 and Harper posted 18.

FIRST QUARTER
· California Baptist got the scoring underway for the evening as they found success on its first possession of the contest when Trinity San Antonio hit a layup.
· The Aggies quickly responded as Bigue Sarr hit a jumper from the elbow to get NM State on the board and tie the score at 2-2 at the 8:53 mark. Sarr would score the first four for the Aggies as she scored two possessions later to eclipse her total from last game in just two and a half minutes.
· Following Sarr's second bucket, CBU's leader Ane Olaeta scored as she scored six of the Lancers' first eight points.
· Olaeta's layup also kick-started a 13-0 run for the home squad before a pair of free throws at the 4:00 minute mark ended the streak and place the score at 19-6 in favor of the Lancers.
· Later in the quarter, both Shania Harper and Deja Terrell came off the bench to score as Harper hit a jumper and Terrell knocked down a three-pointer off a feed from Mel Isbell.
· With the five points from Harper and Terrell, the Aggies closed the second quarter trailing 11-26.

SECOND QUARTER
· CBU's San Antonio started the scoring in the second half as she did to start the first period, giving the Lancers a 16-point advantage.
· Sophomore Taylor Donaldson then answered San Antonio and CBU as Donaldson got a running jumper to fall off the backboard.
· The Lancers then put together another scoring streak as they scored eight straight to take a 35-13 lead before Sarr scored at the 6:42 mark.
· Fama Thiam then got her name on the score sheet as she nailed a three-pointer from the corner for her first and only points of the contest.
· The Aggies then suffered a scoring drought while CBU strung together 14 straight to gather a 51-18 lead with 19 seconds remaining in the half.
· A pair of Jade Bradley free throws in the final seconds of the quarter ended the run and helped the Aggies end the half on a positive note despite shooting just 19 percent in the first two quarters.

THIRD QUARTER
· Soufia Inoussa started her scoring for the night and opened the second-half scoring for both teams when she got a tough left-handed runner to fall at the 7:49 mark of the third quarter.
· After a few made baskets on CBU's side, NM State's Bradley scored on a possession in which the Aggies recorded two offensive rebounds and had three looks at the rim to put the Aggies down 24-58 at the 5:26 mark.
· The next four Aggie points came from a pair of trips to the free-throw line for Harper and Kaiser.
· Kaiser then scored on a fast-break feed from Adrianna Henderson to give the Aggies a quick 4-0 run near the end of the third quarter.
· Aggie sharpshooter Kayla Watkins then came off the bench and within 13 seconds of action, the Weber State transfer hit a three-pointer from the corner to put the score at 33-66 with 1:42 left to play.
· The Aggies also scored the next two as Donaldson scored on a fast break with 1:24 to play.
· The next seven tallies on the board went to California Baptist before Adrianna Henderson hit a deep two at the buzzer for her first points since Jan. 15. Her bucket placed the Aggies behind the Lancers on the scoreboard, 37-73.

FOURTH QUARTER
· NM State's best quarter of the evening was without a doubt the final quarter as they outscored the Lancers 27-19.
· To open the strong period, the Aggies went on a 9-2 run, highlighted by seven points from the Aggies top scorer Sarr.
· The Aggies also posted strong two minutes later in the period when four Aggies combined for eight straight points as Henderson, Harper, Peterson and Donaldson each scored to make the score read 54-78 with 4:04 to play.
· Donaldson continued her scoring ways as she hit three-pointers on two consecutive Aggie possessions to bring her game total to 12 on the night.
· Harper scored the final two points for NM State as she scored with just over a minute left before CBU's Nicole Avila-Ambrosi posted the final two points of the game and gave the Lancers a 92-64 victory.

UP NEXT
· NM State now travels up the coast to take on Seattle U (6-14, 1-8) who is currently on a five-game losing streak.
· The Redhawks will host the Aggies inside the Redhawk Center with tip scheduled for 3 p.m. (MT).