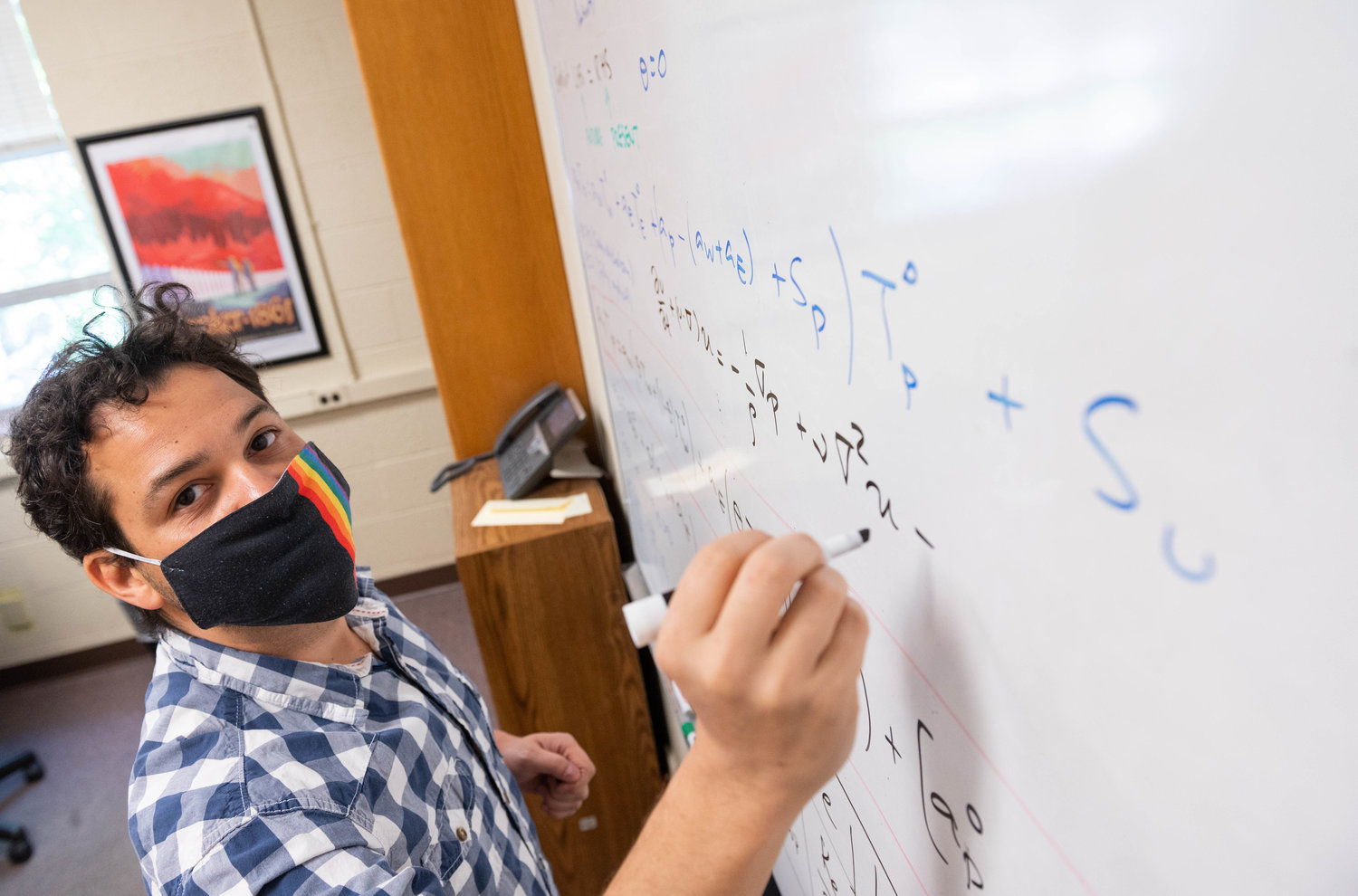 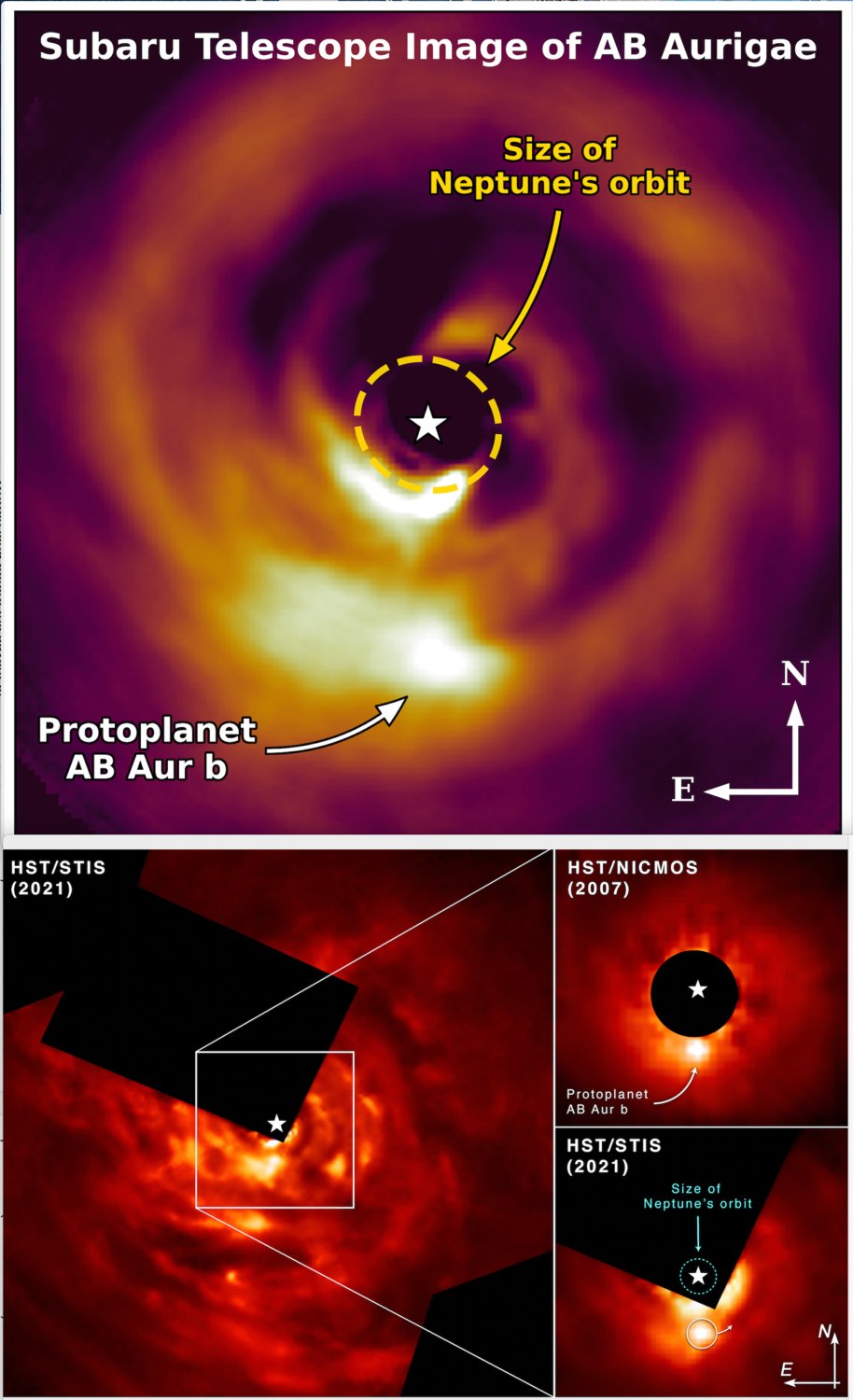 Top: An image from the Hubble Space Telescope demonstrates a comparison of the protoplanet from an image taken in 2007 to an image taken in 2021. Bottom: An image from the Subaru Telescope in Hawaii shows the massive size of the protoplanet forming around AB Aurigae, a very young star in the Auriga constellation about 531 light years from the Sun.
Photos courtesy of NMSU
Previous Next
Posted Tuesday, May 24, 2022 3:13 pm
By Minerva Baumann, Media Relations Officer NMSU News Team

Astronomers can’t go back in time to observe how the solar system was formed, but they can observe planets that are forming now and use computer simulations to help them better understand the process.

A New Mexico State University astronomy professor is part of a team of scientists that wrote a paper published this month in the journal “Nature” that has identified a protoplanet in another star system that may be forming differently than expected. It is the first system in which the evidence points to this alternative theory of planet formation.

The paper “images of embedded Jovian planet formation at a wide separation around AB Aurigae” was published in the May 9 edition of the journal “Nature” and co-authored by NMSU astronomy associate professor Wladimir Lyra.

“The ultimate arbiter of science is nature. We need to observe what nature does. Then to advance our knowledge, we build models to explain our observations,” said Lyra, who builds computer models based on astronomical data.

The recent paper is a result of Lyra’s collaboration among a group of scientists including lead author Thayne Currie, an astrophysicist at NASA-Ames Research Center and the Subaru Telescope. Currie, along with other researchers, shared observational data of the protoplanet forming around AB Aurigae, a very young star in the Auriga constellation about 531 light years from the Sun.

“It’s not even a baby planet. It’s an embryo planet,” Lyra said. “It’s a planet that is still embedded in the disc. These planets form from gas and dust around young stars. That’s how the Earth and other planets around the Sun were formed.”

Using the Subaru Telescope and the Hubble Space Telescope, researchers found the data on this protoplanet was intriguing and not easily explainable. Lyra created a computer simulation to match the observations and better understand the process of how this massive gas giant planet is forming.

What they found is unexpected.

“On this particular observation, what was observed was a planet 10 times more massive than Jupiter at a distance from the star that is twice the distance that Pluto is from the sun,” Lyra said. “This planet is still embedded in the disc. It is also still very hot. You can see the object is still glowing from its formation.”

For decades, scientists have relied on two theories of how planets and stars form. One is core accretion, also known as “bottom up,” when small bodies about the size of an asteroid, collide and coalesce in a disk cloud, eventually adding gasses and growing massive planets the size of Jupiter or Saturn.

The second theory of planet formation is gravitational instability, also known as “top down.” This theory begins with a massive disc of dust and gas so large that it ends up fragmenting. In a disc around a star, these fragments collapse from the top down and are about as massive as Jupiter. This is the process by which massive stars form in a galaxy.

While the theory of gravitational instability forming planets has been around for decades, there has been no clear-cut case that demonstrates a planet could be formed in that way. The “Nature” article outlines evidence that the protoplanet observed around AB Aurigae is such a planet, countering long established theories.

Lyra emphasized while the evidence points to the formation of this protoplanet by gravitational instability, so far it doesn’t disprove the possibility of it forming through the core accretion method.

The team will continue looking at that system in longer wavelengths, probing deeper into the disc. Lyra called it a “very interesting avenue to explore in the future to see if there are conditions that this planet can still form by core accretion.”