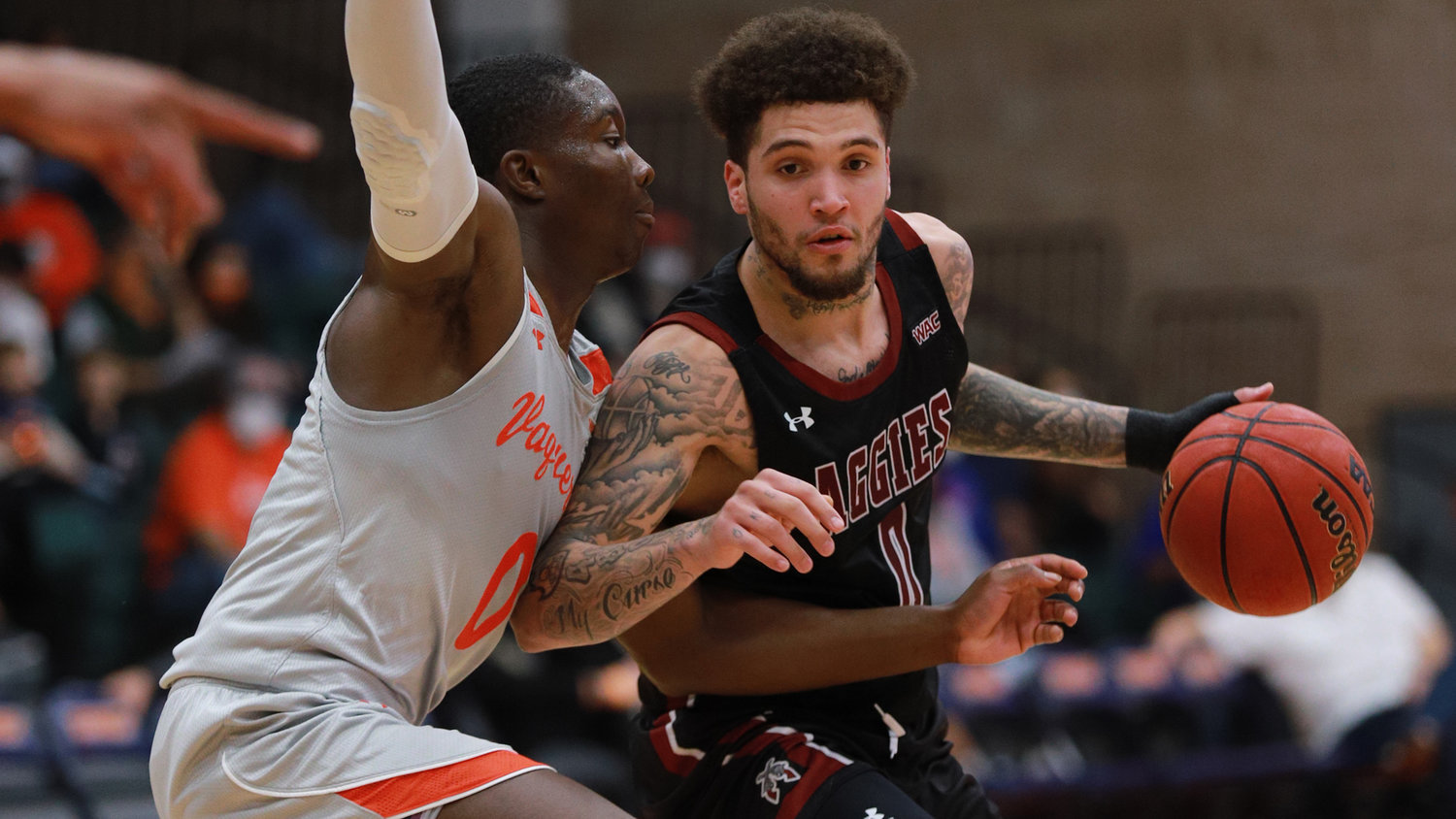 EDINBURG, Texas - All season long, NM State faithful have been waiting and wondering when the Aggies were planning to get back to their rebounding roots.

Saturday night inside the UTRGV Fieldhouse, it finally happened.

Teddy Allen submitted a 19-point, 11-rebound double-double, four other Aggies poured in 10 or more points and NM State employed some powerful rebounding and its superior depth to claim an 85-73 win over UTRGV.

NM State, which extended its winning streak to eight games, is one of just three WAC teams without a league loss so far in 2021-22. The Aggies used a 49-26 edge on the glass as they increased their league-leading win total to 13 games. The victory also elongated their winning streak in true road games to eight in a row - the second-longest active streak in the nation.

FIRST HALF• The first of nine first-half three-pointers by the home team came on the game's opening possession as Mike Adewunmi splashed a long ball to hand the hosts an early lead.• NM State countered the Vaqueros' early accuracy from distance with the one-two punch of Teddy Allen and Will McNair Jr. That duo netted all of the visitors' points during their 9-0 surge as the Aggies tried to put the short-handed Vaqueros away early on.• UTRGV, however, had no plans to go down without a fight. Though they only had eight players available, the Vaqueros used the sharpshooting abilities of Xavier Johnson to make things interesting. Johnson's long-range prowess was on display early and often and he hit the first of his four first-half triples with 14:43 left to cut the Aggies' lead down to 12-10.• Xavier Johnson's triple started a 6-0 run by the Vaqueros which put the Aggies at a 14-13 disadvantage.• Twice more before the clock hit seven minutes to go in the half Xavier Johnson canned three-pointers which pushed the hosts ahead by two.• Countering the one-man scoring show of Johnson was NM State's superior depth. Donnie Tillman ventured out beyond the arc and broke a 35-35 deadlock by draining the first of his two first-half triples with 2:52 remaining.• Tillman came right down on the Aggies' next possession and splashed a second trifecta in the exact same location as his first to help the visitors continue their 9-2 run to close out the frame. Allen's three-point play with 1:17 left hiked the Aggies' lead to 44-37 at the halftime horn.• Though Johnson lit up the scoreboard to the tune of 17 points on a 6-of-12 effort from the field, the Vaqueros didn't get too much from anyone else. Taking away Johnson's one-man scoring show, UTRGV went 7-of-20 (.350) from the field.• It was the Aggies' size which made the difference in the opening frame as well. NM State owned a 24-13 (+11) edge in rebounding to help it gain the upper hand.• NM State also employed a strong shooting touch to enjoy its seven-point edge at the break. The Aggies drilled 48.5-percent (16-of-33) of their tries from the field compared to a success rate of 40.6-percent (13-of-32) by the hosts.

SECOND HALF• A 9-4 run by the visitors started the final frame and the Aggies opened up a 12-point lead, 53-41, after Clayton Henry splashed a three-pointer with 15:55 to go.• The Vaqueros managed to pull back within seven points following Quinton Johnson's three-point play with 13:26 to go. With their lead down to 58-51, a 7-0 run consisting of scores from Allenand Mike Peake hiked the Aggies' advantage to 65-51 with 11:54 left.• NM State's lead didn't dip below eight points for the rest of the night as the Aggies extended their winning streak to eight games.• After watching Xavier Johnson pour in 17 points in the opening frame, the Aggies' defensive adjustments paid dividends through the final 20 minutes. Johnson notched just three more markers in the final frame, going 1-of-8 from the field through that span.• With rebounds readily available, the Aggies continued to grab more than their fair share in the last half. The Aggies owned a 25-13 edge on the glass and held the Vaqueros to a shooting clip of just 38.7-percent (12-of-31) over the final 20 minutes.• The Aggies put in 15 of their 31 tries from the field (48.4-percent) as well as eight of their nine free throws to close things out.

KEY PERFORMERS/STATISTICS OF NOTE• Able to wear down the short-handed Vaqueros through the course of the night, the Aggies used their depth to help lead them to victory. Five Aggies finished with 10 or more points and NM State received 22 of its 85 points from its bench.• Allen's 19-point, 11-rebound double-double was his second of the year and the Phoenix, Ariz., product also added five of his team's season-high 23 assists.• With Allen on their side, the Aggies owned a massive 49-26 (+23) edge on the glass against their Lone Star State foes.• Johnny McCants, again, did a little bit of everything to make sure the Aggies kept their winning streak alive. The Las Cruces, N.M., product went 7-of-9 at the foul stripe to power a 13-point performance while adding seven rebounds, two assists and a trio of blocked shots. Those three blocks pushed his career total to 100, making him one of just eight NM State players in the history of the program to hit triple digits in terms of career blocks.• Other NM State players who posted 10 or more points included McNair Jr., who totaled 17 on an 8-of-11 effort from the field, Rice who netted 14 and Peake who put in 10 on a 4-of-5 shooting clip.• The win extended NM State's streak over the Vaqueros to 21-straight games. That's the Aggies longest active streak against any WAC foe.

COMING UP NEXT• A stretch of five consecutive games against opponents from the state of Texas continues for NM State inside the Pan American Center next week. The first of two home games for the Aggies next week is a WAC matchup with Tarleton. Tip-off Thursday evening is set for 7:00 p.m.