Remembering Neil McCarthy and the mark he left on NMSU 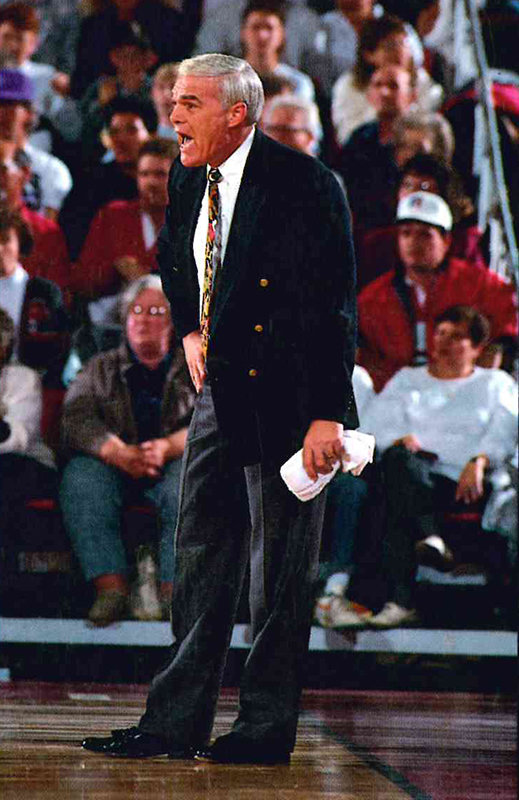 Neil McCarthy led the NMSU men’s basketball program to seven straight postseason bids, including a trip to the Sweet 16 in 1992. That was the farthest the Aggies have gone since their 1970 trip to the Final Four.
NMSU Courtesy photo
Posted Thursday, September 23, 2021 10:21 am
By Jack Nixon

The Big Dog is gone. Neil McCarthy died in his sleep last Sunday after living for 81 years.

The first time I met Neil was at the All-College Tournament in  1978. NMSU had beaten his Weber State team for the championship and we spoke briefly at the post-tourney dinner.

He dressed like comedian Steve Martin back then. He wore a white suit, as Martin did, and bore a passing resemblance to the funny man from across the court.

Little did I know that this would be a man that I would accompany on one of the most successful and unpredictable athletic eras at NMSU.

I returned to Las Cruces for the 1986-87 season, which was Neil’s second year coaching the Aggies. That year and the next produced .500 seasons in the win column. That would change in 1988-89 and the postseason appearances continued for seven years.

In my job, I have to get along with all the coaches I work with, obviously this is easier with some than others. Neil was cooperative with me as far as interviews and coaches shows, and didn’t offer much more than the bare facts in an aloof manner. But he really had a bully’s mentality and I gained his respect when I refused to change a column I had written in The Bulletin. Neil called me on a Sunday asking me to retract or correct the column because he was getting heat from the player’s agent. I believed in what I had written and chose that over whatever fresh hell could rain down on me in the future from Coach.

I said I appreciated his position, but that I wasn’t going to do what he asked. He said OK, and after that, I was a made man in Neil’s world. Welcomed openly at practice, more engaged interviews not that there weren’t some postgames interviews that led to drama.

After a game at Long Beach State in 1988, unhappy with the officiating, Neil called one of the refs a “cheating little worm” and a “sick old man.” I tried by best to steer him on to anything else unsuccessfully for the next five minutes. After completing his rant, he said, “Now we can talk about the game”.

Neil referred to himself as “The Big Dog” and by the early 90s was used to getting what he wanted at home or on the road. After a game at UC-Irvine, the team was connecting through Phoenix.  McCarthy became engrossed in a college game on TV in the lounge. The flight was called and a member of his staff came to retrieve him. Neil wanted to see the end of the game and told his staffer, “The airline won’t leave the Big Dog.”  They did.

He caught a later flight back to El Paso.

Neil had a very kind, generous side, that he showed to a select few. There was a time, when Neil’s advice saved my world.  My sister was terminally ill and I was having trouble dealing with her son, who was 17 at the time. I knew Neil had lost his first wife to leukemia and reached out to him at his home. His advice was on point and helped diffuse an emotional situation.

Neil was a special type of person and whether you liked him or not, his mark is indelible on NMSU athletics.