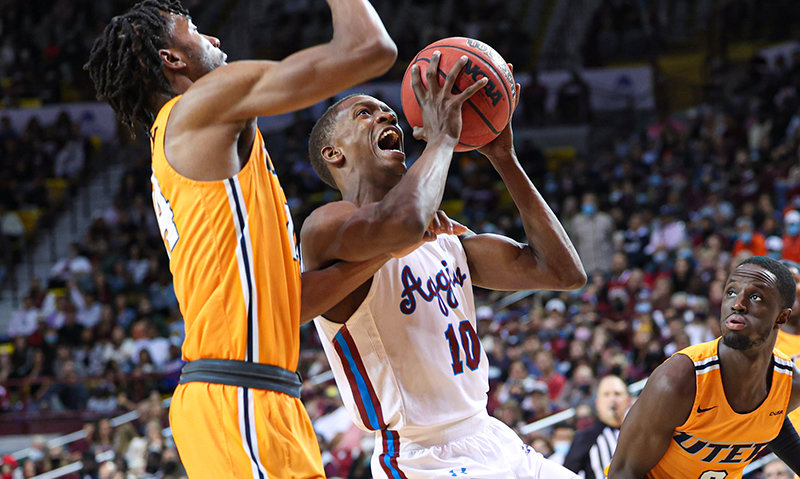 Denied an opportunity to tangle with their longtime borderland rivals last season, it was clear the NM State men's basketball team relished the opportunity to go toe-to-toe with one of its fiercest rivals Saturday night.

Coming on strong in the second half, Rice scored 12 of his team-high 15 points through the final 21 minutes of action and a key 21-9 NM State run over a span of nearly six minutes in the deciding frame proved to be the difference as the Aggies held on for a 77-71 victory over UTEP inside the Pan American Center.

FIRST HALF• A pair of Battle of I-10 first-timers helped the Aggies jump out to a 7-2 lead to start. Teddy Allen's put-back floater in the lane opened up the scoring before Donnie Tillman punched home a powerful one-handed slam. Jabari Rice canned a fast-break triple to close out the Aggies' early scoring spree.• Countering the Aggies' strong start, UTEP hit the home team with an 8-0 run which concluded with a Jamal Bieniemy layup 5:24 into things to hand the visitors an 8-7 edge.• From there, the Aggies snatched the momentum away for the remainder of the frame. Leading the way on a 12-5 NM State surge was Yuat Alok who connected on a driving layup before canning a corner triple which broke a 12-12 deadlock.• Two makes at the foul line from Tillman hiked the hosts' lead to 19-12 with 10:52 left in the frame.• NM State's lead bulged to double digits before the opening stanza came to a close. Threatening to run away with things, NM State received back-to-back free throw makes from Marchelus Avery to push its lead to 12, 28-16, with 5:24 to go before the halftime horn.• UTEP, however, was unwilling to let their longtime rivals run away with things. The Miners closed the half on a 14-7 run thanks largely to spending a great deal of time at the free throw line. Seven of the Miners' points through that surge came from the charity stripe as Bieniemy drained three while Souley Boum and Tydus Verhoeven each swished a pair.• Half of the Aggies final 10 points of the stanza came from free throws, too, and Virshon Cotton drained a pair with eight seconds left to stake NM State to a 35-30 lead at the break.

SECOND HALF• After finishing with just three points through the first 20 minutes of action, Rice came alive for the Aggies through the last 20 minutes. Seven of the Aggies' first nine points in the final frame came off the hands of the Houston, Texas, product as NM State extended its lead back to double-digits, 43-33, with 17:00 to go.• UTEP didn't let things get out of hand quite yet, keeping things close with some offense of its own. Twice after the Aggies pushed their lead to 10 or more, UTEP cut it down to seven. The last of those occurrences came when Jamari Sibley converted a layup to make matters 49-42 with 13:27 left.• Making a bid to leave their Texas foes in the dust, NM State launched an all-out assault on the Miners from long range. Through a 21-9 run which spanned the next 5:49, Tillman turned in a pair of triples as did Allen which helped push the Aggies' lead to 70-51 with 7:38 left.• Perhaps putting things on cruise control a little too early, NM State let UTEP close the game on a 20-7 run through the final 6:19. It mattered not, though, as the Aggies' lead proved too large for the Miners to overcome.

KEY PERFORMERS/STATISTICS OF NOTE• Another balanced effort led the Aggies to victory. Twelve of Rice's team-high 15 points came in the second half while Allen and Alok chipped in 13 apiece. Alok was especially efficient from the field, going 6-for-8 in the victory.• Tillman turned in a 12-point outing on 4-of-7 shooting to round out NM State's contingent of four double-digit scorers.• Johnny McCants was his usual all-around good self for the Aggies, finishing with six points, a game-high nine rebounds, two assists and a blocked shot.• In his first game of the season, Boum pumped in a game-best 23 points for the Miners who suffered their first setback of the season.• The latest edition of the Battle of I-10 featured 52 combined free throws with NM State going 17-of-30 at the stripe. UTEP converted 10 of its 19 tries from that distance.• NM State pushed its winning streak over UTEP to two games dating back to Dec. 3, 2019, and head coach Chris Jans is now 6-1 all-time against UTEP in his tenure as the Aggies' bench boss.• With the win, NM State has won nine of its last 10 and 14 of its last 16 games against UTEP.• NM State is now 2-0 for the third time in Jans' tenure. The Aggies also won both of their first two games of the season in 2020-21 and 2018-19.

COMING UP NEXT• For the first time this season, NM State is set to take its show on the road. The Aggies are headed to South Carolina to take part in the 2021 Myrtle Beach Invitational next week. Guaranteed to play three games at the HTC Center in Conway, S.C., NM State opens its three-game slate with showdown against A-10 foe Davidson. Tip-off in the second all-time meeting between the Aggies and Wildcats is set for 10:00 a.m. MT Thursday morning.