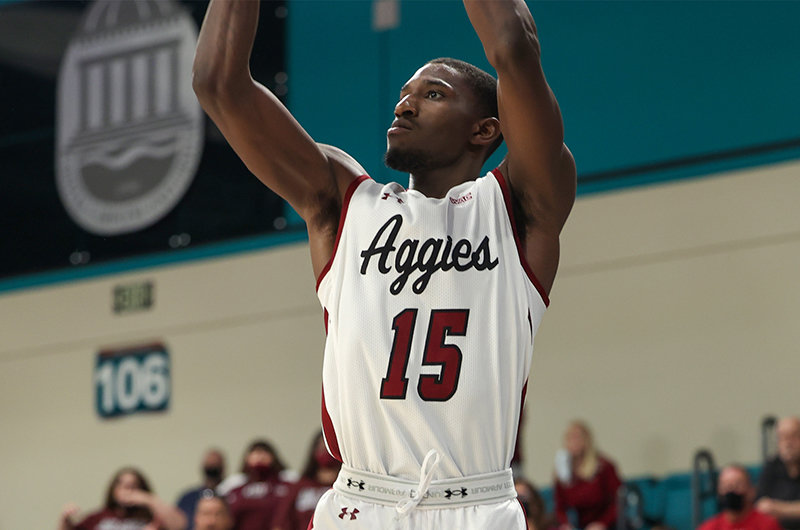 Ever since the season started, NM State head men's basketball coach Chris Jans has maintained the fact that players for his squad - be they familiar names or new ones - will get opportunities.

Mike Peake got his Thursday afternoon.

After two games of minimal production to begin his NM State career, Peake's play down the stretch - including a big three-pointer, a blocked shot and a key rebound - allowed the Chicago, Ill., to play a major role in NM State's 75-64 comeback victory over Davidson in the opening game of the 2021 Myrtle Beach Invitational.

Though he was not a major contributor in the scoring column by finishing with just six points, Peake's performance at the HTC Center was aided by a 22-point outing by Teddy Allen and a magnificent 17-point, seven-rebound, seven-assist line from Jabari Rice to help the Aggies stay perfect.

FIRST HALF• Knocking the Wildcats back on their heels, NM State had plans in place to run away with the game from the jump. The Aggies used a 19-7 run through the first 6:14 to take control and it was Allen (five points), Will McNair Jr., (four points) and Donnie Tillman (five points) who poured in points through that surge.• Following Tillman's triple to hand NM State a 19-7 lead, however, Davidson woke up. The Wildcats outscored the Aggies by a 26-9 margin through the remainder of the half to put NM State's chances of victory in question.• Through the final 13:39 of the half, NM State cashed in on just a pair of field goals - a three-pointer by Allen with 8:53 on the clock and a long ball courtesy of Peake with 33 ticks remaining in the frame. NM State also committed eight turnovers through the last 13:39 which aided the Wildcats in their quest for a first-ever win over NM State.• Luka Brajkovic powered the Wildcats back into things with 11-first half points, but it was Michigan sharpshooter Foster Loyer who handed Davidson their first lead of the game by drilling a three-pointer at the top of the key to put NM State at a 24-23 disadvantage with 4:21 on the clock.• Loyer's long ball came near the beginning of Davidson's 14-0 run which flipped the script for the Wildcats. After trailing by as many as 12 points early on, Davidson opened up a double-digit lead (33-23) after Brajkovic swished a pair of free throws with 1:27 left in the half.• Allen answered, though, with two freebies of his own before Peake's first trifecta made it a five-point Davidson lead (33-28) at the half.

SECOND HALF• Able to carry over their strong finish to the first half to the second stanza, NM State started the final 20-minute segment on an 11-5 run to get the lead back. Johnny McCants bruised his way to a couple of buckets down low before Rice rattled in a three-pointer with 16:27 on the clock to hand NM State a 39-38 lead.• Rice's first three-pointer of the frame set the stage for a monstrous second-half performance for the Houston, Texas, product. After that triple, Davidson answered with four-straight points to retake the lead before the Aggies punched back with a 16-4 scoring spree to open up a 55-46 lead with 9:40 left. Allen and Rice each splashed two three-pointers through that offensive surge.• Though the Aggies would never trail again after scoring 16 of 20 points, Davidson didn't go away. Hyunjung Lee made it a two-point game thanks to a smooth three-pointer at the top of the key with 2:56 left. Clinging to a 66-64 lead, NM State didn't flinch when given the chance to close things out.• Lee's triple proved to be the final points the Wildcats would score as NM State closed out the game on a 9-0 run. Peake's second - and final - three-pointer came in the corner next to NM State's bench with 2:05 to go and was followed up with three free throws from Rice, two more from Donnie Tillman and a hard-nosed layup by Allen.• Peake corralled a key defensive rebound on a misfire by Lee from three-point range with 1:48 left and blocked a triple try by Lee with 37 ticks to go to help seal the deal.

KEY PERFORMERS/STATISTICS OF NOTE• Though Allen and Rice stole the show on offense, they were aided by the likes of Tillman (14) and McCants (11) who made it four NM State players with double-digit point totals. NM State has had four or more players score 10 or more points in each of its first three games of the year.• The Aggies recovered from the first first-half offensive funk by scorching the nets in the deciding frame. NM State put up shooting splits of .571/.538/.643 through the final 20 minutes of action and moved the ball around well. The Aggies finished with 15 assists on 25 made field goals.• Davidson also had four players in double-digits and were led by Brajkovic's 19. Lee and Loyer pumped in 14 apiece in the Wildcats' second-straight loss.• NM State moved to 3-0 on the year with Thursday afternoon's win and went to 2-0 all-time against Davidson.• Under Jans, the Aggies are now 8-3 in MTE tilts.