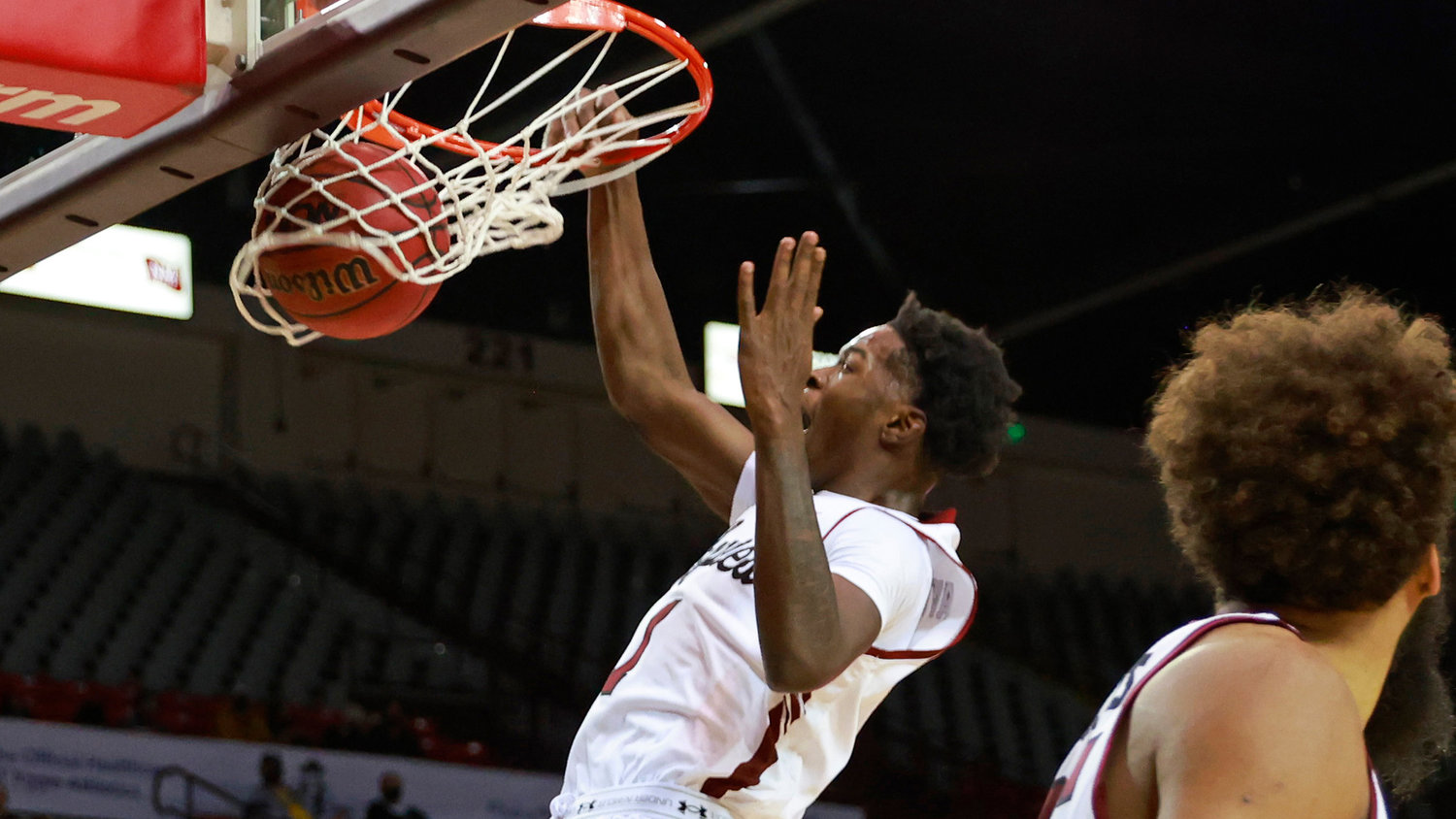 THE OPENING TIP
• In what has turned out to be the only game for the NM State men's basketball team this week, the Aggies are in Edinburg, Texas, for the first time in almost two full years for a Saturday evening WAC showdown with UTRGV. NM State's puts its WAC-leading seven-game winning streak on the line when it takes on UTRGV near the Texas/Mexico border.
• Tip-off inside the UTRGV Fieldhouse is set for 6:00 p.m. MT.
• ESPN+ and the ESPN app will stream each and every second of the action in the 27th all-time matchup between the Aggies and Vaqueros. Jonah Goldberg and Bryan Smith will handle play-by-play and analysis responsibilities.
• Over the airwaves, legendary radio play-by-play man Jack Nixon will set up shop in the UTRGV Fieldhouse to call the action.
• Nixon's play-by-play and analysis can be heard on 99.5 Zia Country FM in Las Cruces, N.M., and nationwide on The Varsity Network app.
• Affiliate stations of the Aggie Sports Network can be tuned in to in Artesia, N.M. (990 AM), Carlsbad, N.M. (1240 AM), Gallup, N.M. (94.9 FM), Alamogordo, N.M. (103.7 FM) and El Paso, Texas (1380 AM). All of those stations will also carry Nixon's commentary of Monday night's tilt.

WAC COVID PROTOCOLS
• Following a vote of athletic directors, the Western Athletic Conference has adjusted its game cancelation policy to balance the health and safety of coaches, student-athletes, staff and officials as well as protect the integrity of the conference schedule.
• The minimum number of participants for conference play has been set at seven COVID-eligible student-athletes and one COVID-eligible coach. If a team meets the requirement, they will be expected to compete in the contest.
• In addition, the WAC has determined that if a game is canceled for COVID-related reasons, administrators from the impacted institutions will work collaboratively to find a mutually agreeable date to reschedule. If they are unable to find a date, the game will be considered a no-contest.
• The conference will continue to work with institutional leadership regarding any changes to seeding procedures for the 2022 Hercules Tires WAC Basketball Tournament.

LET'S GO STREAKING
• NM State's seven-game winning streak is the ninth-longest active streak in the nation and the longest among all WAC clubs.
• That winning streak has pushed NM State's win total to 12 - the most by any WAC team and the 11th-highest win total so far this season in all of college basketball.

POMEROY'S POINTS
• Noted basketball statistical guru Ken Pomeroy - founder of the widely-utilized KenPom site - has logged the following observations about the Aggies thus far in 2021-22.
• NM State is highly effective in putting the ball in the basket the closer it gets to the tin. The Aggies rank 17th nationally in two-point field goal percentage (.565).
• A big reason for that is the play of senior forward Johnny McCants who ranks eighth nationally with a two-point field goal percentage of .757.

MISCELLANEOUS & MILESTONES
• NM State's collective field goal percentage of .472 ranks 55th in the nation and second among all WAC teams.
• The Aggies' rebounding margin of +6.3 is the 49th-best in the nation as well as the fourth-best in the WAC.
• NM State has seen a dip in its accuracy from three-point range as of late. Over the last six games, the Aggies are shooting 35-of-140 (.250) from long range.
• In one of his most recent games, redshirt junior guard Jabari Rice put in 22 points in NM State's win at Washington State (Dec. 15). When Rice scores 20 or more points in a game, NM State is 9-1.
• High-scoring guard Teddy Allen leads NM State in scoring at a rate of 17.2 points per game and also ranks 15th nationally in free throw percentage (.906). The Phoenix, Ariz., product also sits among the top 50 players nationally in field goal attempts (47th, 193).
• With head coach Chris Jans leading the way, the Aggies have posted a 6-6 (.500) record against Power Five opponents. That mark includes a 6-4 (.600) showing against Power Five foes in regular-season tilts. NM State has secured wins over Illinois, Miami, Mississippi State and Washington State (three times) under Jans' direction since 2017-18.
• Jans returned to the bench on Friday, Dec. 3, 2021 for the Aggies' game at UTEP. The team's fifth-year bench boss had previously missed its last two games due to COVID-19 protocols.
• In a 101-94 home loss to New Mexico on Monday, Nov. 30, 2021, the Aggies gave up 100 or more points to the opposition for the first time in the Chris Jans coaching era. Before that game, the last time NM State let a foe hit the century mark came in 2017 when it claimed a 107-101 WAC win at UTRGV on Feb. 18. Since 2010, only three NM State opponents (Nevada, New Mexico and UTRGV) have amassed 100 or more points in a game.
• Now in his fifth season in an NM State uniform, Johnny McCants has broken into the program's top-ten leaders in blocked shots. McCants, a Las Cruces, N.M., product has 97 rejections to his credit as a collegian which are the ninth-most all-time by any Aggie. He is hoping to become the eighth player in program history to record 100 or more blocked shots in a career.
• Three NM State players are all fast approaching the 1,000-point mark for their respective NCAA Division I careers. Johnny McCants needs 94 more points to get there while Jabari Rice is 108 points away from quadruple digits in the scoring column. Teddy Allen requires just 153 more points to reach the 1,000-point plateau in his NCAA Division I playing career.
• Freshman forward Marchelus Avery has been a strong option for the Aggies off the bench as of late. Through his last three games, the Richmond, Va., product is averaging 16.7 points, 6.0 rebounds and 1.7 assists per game while shooting .667/.455/.556.

LAST TIME OUT vs. UTRGV | Thursday, March 11, 2021 | 2021 WAC Tournament Quarterfinals
• With a trip to the 2021 WAC Tournament semifinals on the line, NM State erased an early 4-3 decficit by going on a 17-4 run over a span of 7:20 to take the wind out of UTRGV's sails early en route to a 77-61 win over the Vaqueros inside Orleans Arena.
• Following that run, NM State's lead didn't dip below eight points for the rest of the night. The Aggies' lead grew to as many as 25 points, 73-48, with 5:07 to go in the game.
• Eleven of the 14 NM State players who logged minutes in the blowout win recorded points, none more than Wilfried Likayi who finished with a game-high 15 on a 5-of-7 outing from the field.
• Jabari Rice flirted with a double-double by concluding his night with nine points and a game-high nine rebounds. Those nine boards helped the Aggies own a 38-24 (+14) edge on the glass.
• In the first of his three fine outings in the 2021 WAC Tournament, Donnie Tillman turned in a 12-point, ive-rebound performance in just 18 minutes of action. At the conclusion of the league's postseason fracas, Tillman earned a spot on the All-WAC Tournament team.
• Showing off their depth, the Aggies received 34 of their 77 points (44.2-percent) from their eight bench players who saw the court.
• Sharing the ball was another important component of the Aggies' victory. NM State recorded assists on 15 of its 26 made field goals (57.7-percent) in order to move on in the league's postseason tournament.
• The win was NM State's 20th in a row over UTRGV. That's the longest active winning streak for the Aggies against any current WAC opponent.
• Head coach Chris Jans moved to 7-0 as the Aggies' bench boss in the WAC Tournament with the win. Additionally, he won his 14th-straight game in the month of March against WAC opposition.

LAST TIME OUT | NM State 78, vs. Chicago State 61 | Saturday, Jan. 1, 2022
• Holding on to a four-point lead at the half, NM State started the final frame on an 11-0 run and didn't look back en route to a 78-61 victory over Chicago State on the first day of 2022 inside the Pan American Center.
• Jabari Rice led the way for NM State, finishing one rebound shy of a double-double with a 15-point, nine-rebound outing. Teddy Allen and Marchelus Avery added 11 points apiece for NM State who won its 16th-straight game over the Cougars.
• NM State used the starting lineup combination of Allen, McCants, Mario McKinney Jr., Will McNair Jr. and Rice for the third time this season. The Aggies are 3-0 with that starting lineup.
• Allen's 11 points were his fewest in a game this season as were his seven field goal attempts.
• By going 2-for-2 from the field, junior guard Nate Pryor extended his streak of consecutive field goals made to seven dating back to Dec. 11.
• The game was NM State's first WAC game of the regular season as well as the first WAC tilt inside the Pan American Center in 667 days.
•  Johnny McCants, Nate Pryor, Donnie Tillman and Rice all made their respective returns to the NM State lineup during the game, too. McCants, Pryor and Rice had sat out each of the Aggies' previous two games to rest and rehabilitate while Tillman appeared on the court for the first time since Friday, Dec. 3 at UTEP.
• NM State moved to 14-3 all-time in WAC openers with Saturday afternoon's win. That record includes a 3-2 mark in WAC openers under head coach Chris Jans.
• Eleven of the 12 NM State players who logged minutes in Saturday's win scored points.
• Yuat Alok (non-COVID related illness) did not play in Saturday's win.
• Clayton Henry continued to work his way back into the Aggies' rotation during the win as well. The senior guard finished with a season-high six points as well as a pair of rebounds in 15 minutes of action.
• NM State fell behind by as many as three points in Saturday's game. It marked the first time NM State trailed in a WAC regular-season game since March 5, 2021, in an eventual 76-66 win at Dixie State.

SCOUTING UTRGV | ROSTER | SCHEDULE | STATISTICS
• Waving goodbye to the city of Clarksville, Tenn., 2018 Ohio Valley Conference Coach of the Year Matt Figger assumed the role of UTRGV's head coach in March of 2021. Thus far under Figger, the Vaqueros have gone 5-9 and are hoping to secure their first WAC regular-season win since January 16, 2021, Saturday night.
• The free throw line has been a friend to the Vaqueros who have amassed 20.6-percent of their total offensive output from that distance in 2021-22. UTRGV ranks 20th in the land in free throw attempts (309) while its 209 makes from that distance are the 38th-most among all college basketball teams.
• Taking over at point guard from Javon Levi (transferred to UT-Arlington at the conclusion of the 2020-21 season) is Ricky Nelson. The Vaqueros' floor general leads the WAC and ranks ninth nationally in minutes played per game (37:12) while his 4.5 assists per game represent the fourth-best average in the WAC.
• Headlining UTRGV's offense is Justin Johnson who pumps in points at a rate of 17.3 per game - the fourth-highest average in the WAC. Johnson's ability to get to the free throw line is a major part of his game, too, as he ranks second in the WAC in both free throw attempts (79) and free throws made (53).
• Four different UTRGV players have turned in at least one double-double this season with Mike Adewunmi's two leading the way. In fact, Adewunmi (6.4 rebounds/game) and RayQuan Taylor (6.8 rebounds/game) are two of the top ten rebounders by average in the WAC.
• Marek Nelson gives UTRGV a strong on-ball defense option. His 2.08 steals per game are the third-best average in the WAC and the 44th-best in the nation.

COMING UP NEXT
• The second of NM State's four WAC home games in the month of January is set for Thursday night inside the Pan American Center when Abilene Christian pays a visit to Las Cruces, N.M., for the first time since 1966. Tip-off for the first clash between the Aggies and Wildcats in over a half-century is set for 7:00 p.m. MT. ESPN+ and the ESPN app will carry each and every second of the action.