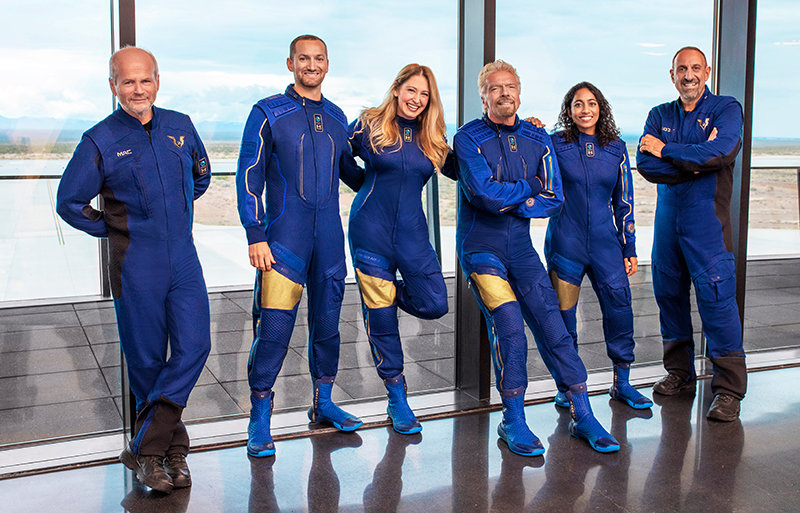 A flight window opens for SpaceShipTwo Unity on July 11. If weather allows, Sir Richard Branson and a full crew will take off from Spaceport America for another test flight into space as Virgin Galactic continues toward its mission of making space available to everyone.

The “Unity 22” mission will be the 22nd flight test for VSS Unity and the company’s fourth crewed spaceflight, according to a Virgin Galactic press release. It will also be the first to carry a full crew of two pilots and four mission specialists in the cabin, including Branson, the company’s founder, who will be testing the private astronaut experience.

Building on the success of the company’s most recent spaceflight in May, Unity 22 will focus on cabin and customer experience objectives, the release says.

Following this flight, and in line with normal procedures, the team will complete inspections of the vehicles and an extensive data review, which will inform the next steps in the test flight program. Two additional test flights are planned before the company expects to begin commercial service in 2022.

Virgin Galactic is sharing a global livestream of the spaceflight. Audiences around the world are invited to participate virtually in the Unity 22 test flight and see first-hand the extraordinary experience Virgin Galactic is creating for future astronauts. The livestream will be available to watch on Virgin Galactic.com and will be simulcast on the Virgin Galactic Twitter, YouTube and Facebook channels. It is expected to begin at 7 a.m. on the day of the flight, July 11.

“I truly believe that space belongs to all of us,” Branson said. “After more than 16 years of research, engineering and testing, Virgin Galactic stands at the vanguard of a new commercial space industry, which is set to open space to humankind and change the world for good. It’s one thing to have a dream of making space more accessible to all; it’s another for an incredible team to collectively turn that dream into reality.”