What Covid dollars paid for in Southern New Mexico 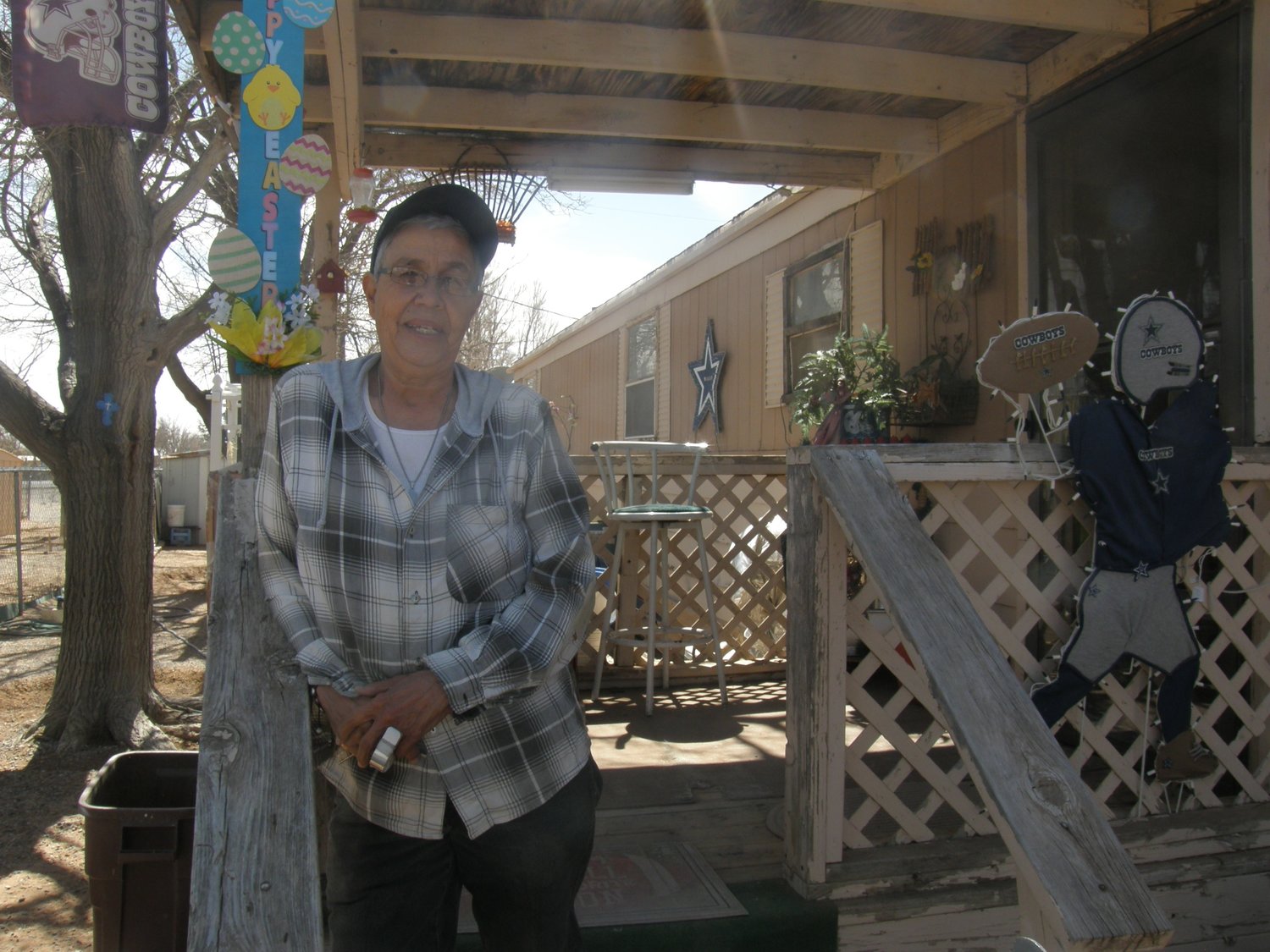 Olivia Aguilar, a resident of Deming, speaks with a reporter from her porch.
Reyes Mata III

Initially, the federal money that came into New Mexico went toward “buying masks and paying for vaccines and very targeted healthcare relief,” Abbey said, and then toward shoring up state budgets.

Now the focus is on investments that will help in future crises. Throughout the past several legislative sessions, an extra $2 billion has been pieced together for the New Mexico treasury – a surplus generated from leftover ARPA funds and the windfall from the state’s strong oil and gas market.

“Rather than have that money sit in Santa Fe in the bank, the Legislature chose to allocate it out over the next couple of years for major kinds of investment projects,” said Charles Sallee, deputy director of the New Mexico Legislative Finance Committee, which oversees New Mexico’s budget development. “This is to strengthen our economy coming out of COVID,” he explained, including “big investments in transportation, big investments in a variety of economic development activities, and venture capital.”

The budget bill that passed in this spring’s session contained infrastructure investments that impact Southern New Mexico, including:

●$20 million for the Santa Teresa Airport in Doña Ana County

●$9.5 million for the Columbus Port of Entry

●$5 million for the New Mexico Department of Agriculture

It’s been more than two years since Covid-19 sent shock waves through New Mexico and the country, crippling the economy and sparking an unprecedented federal rescue.

“The pandemic brought a U.S. recession almost as deep as the Great Recession of the 1930s,” said David Abbey, director of the New Mexico Legislative Finance Committee, which advises the state Legislature on fiscal and public policy matters. “The view was that the states and businesses and individuals did not have the wherewithal to keep going.”

In Southern New Mexico, the pandemic threatened residents’ health, stole family and co-workers and destabilized and ended people’s employment. In interviews and listening sessions with the Southern New Mexico Journalism Collaborative, a coalition of news organizations across the region, residents report continuing impacts, including long-term mental, financial and health issues.

The pandemic is still hampering the economy of New Mexico – which has the nation’s second-highest unemployment rate at 5.3 percent  – and issues with global supply chains and COVID infections continue. A New Mexico Legislative Finance Committee report estimates that the state lost $1.48 billion in taxes, permits and other government fees that were stalled from the pandemic shutdown.

Aided by an unexpected windfall from New Mexico’s surging oil market and an unspent $1.06 billion from its Covid recovery fund, Gov. Michelle Lujan Grisham approved a $1 billion annual budget expansion in March, including investments intended to stabilize the state’s economy in the event of future crises.

But in Southern New Mexico, questions remain about how much the region will ultimately get, and whether it will meet the needs the pandemic has left in its wake.

The Origins and Impacts of Covid Emergency Funding

It was March 15, 2020, when the United States began powering down. Governors declared a state of emergency, schools, bars and restaurants closed their doors and millions of people retreated into their homes.

The federal government began mass borrowing on U.S. Treasury notes, bills and bonds to generate more than $5 trillion, which it distributed to state governments through six Congressional acts:

Nationally, $1.8 trillion went to individuals and $1.7 trillion to businesses, according to a March 11 New York Times analysis. The analysis also showed that $482 billion went to healthcare needs and $288 billion to other areas affected by the pandemic, like higher education and agriculture.

States and local municipalities received $745 billion in total. Between March 2020 and April 2022, New Mexico received $26.1 billion, according to the U.S. Department of Health & Human Services and the New Mexico Legislative Finance Committee.

“The whole concept of this pandemic relief was that the recession was so severe that the government, businesses and individual finances would collapse without this relief,” Abbey said.

The state’s unemployment insurance fund got about $656 million, according to a New Mexico Legislative Finance Committee report, as did rental assistance, Paycheck Protection Program loans, Medicaid costs and FEMA support, among others.

“Federal funding has made dozens of critical investment in Southern New Mexico possible, including, for example, $50 million for a new hospital that is likely to go to Valencia County and nearly $3 million distributed to New Mexico chile growers and producers,” said Nora Meyers Sackett, press secretary for the governor’s office, in an email. The governor’s office also pointed to the Law Enforcement Recruitment and Retention Program, the Homeless Housing Fund and the Recreational Facility Fund, all of which received funding and benefit Southern New Mexico.

Tribal nations in New Mexico received a total of $2.2 billion. Three tribes are located in Southern New Mexico: the Ft. Sill Apache Tribe in Luna County, which is not listed as having received COVID funds, the Mescalero Apache Tribe in Otero County, and the Navajo Nation in Socorro County.

The billions of Covid dollars pumping into the state revived the long-standing suspicion in Southern New Mexico that the more affluent northern part of the state benefited more.

“Historically, (funding) always rolls out to Santa Fe and Albuquerque,” said State Rep. Doreen Gallegos, a Democrat who represents about 30,000 residents of Doña Ana County. “When resources are doled out, it tends to go exactly that way.”

She said the old fiscal habits reappeared, and that Southern New Mexico was left with limited options for even basic pandemic response.

Abbey, the director of the Legislative Finance Committee, said in general, New Mexico got more money than it might have otherwise, because of “small state minimums” set by the federal government. Some federal funding pockets were specifically meant for communities like those in Southern New Mexico.

“Those targeted poverty, whether it's food stamps or housing, and Southern New Mexico, having a relatively high population in poverty, received more federal aid than other states. So in general we did well,” he said.

More than half of New Mexicans – about 1.5 million – live in the northern half of the state, according to the latest census. The southernmost 13 counties of the state have a population of about 617,000 – about 41 percent of New Mexico’s population. The southern region is also poorer, less educated and with more Spanish-speakers than the north, according to census data.

Gerardo Suarez, a 62-year-old resident of Las Cruces, calls Southern New Mexico “a place in the same state but with a different reality.” It is often not the priority, he said.

“It is closer to the border so we see things differently. Our lives are not the same as people around the bigger places like Albuquerque,” said Suarez.

An analysis by the Southern New Mexico Journalism Collaborative found that the southern 13 county governments received a total of $117.1 million in federal ARPA funds, while the more populous northern counties received $289.57 million.

“The state has focused on the population that can vote. And people running for office only focus on citizens so that they can get elected,” he said. “But when it comes to having a need, that is everybody.”

Immigrants were not eligible for Covid stimulus and had difficulty accessing much of the government aid for pandemic relief.

A pool of $10 million dollars of state and federal Covid relief was originally slated to provide assistance to immigrants in New Mexico, among other things. The governor vetoed that provision, and instead the Legislature passed a bill in April that reserves $10 million to “provide assistance to low-income state residents,” according to officials from the state’s Legislative Finance Committee.

In a 2020 special session, the New Mexico legislature also set aside $5 million for “people not getting any other stimulus checks,” including immigrants.

When asked about the funding policies in place for fair allotment of funds, including for non-citizens, Sackett, the governor’s press secretary, stated that “federal pandemic-related relief funds were distributed to communities and families throughout New Mexico with a focus on delivering funds equitably and efficiently to every area of the state” and pointed to federal restrictions on how funds could be distributed.

Looking to the Future

As the Covid-19 pandemic pushes towards its third year, the federal government’s fiscal gears are cooling. The clamor of panic has subsided. Vaccines, natural immunity, and an economy breathing on its own once again have brought a new version of normalcy to American and New Mexican life.

With ambitious investments throughout the state in infrastructure, mental health, broadband and schools, and a new $8.72 billion dollar budget approved – the largest in the state’s history – the economic outlook appears to be improving, officials said.

But the trauma of the global pandemic endures. Nearly a million people have died of Covid in the United States, including more than 7,500 New Mexicans as of May 2.

A few weeks ago, Olivia Aguilar, a resident of Deming, stood out on the wooden front porch of her trailer home, behind a chain link fence, still observing six feet of social distance.

When asked how well the government had responded to the pandemic crisis, she thought for a long moment.

“We went through a lot with Covid,” she said. “I lost a lot of friends to Covid. I lost my nephew to Covid. A lot of people lost their jobs during the pandemic. The government helped with rent when people couldn’t’t work; they gave stimulus checks for food. And it helped people survive. I think that’s a good thing.”

Have something you want the Southern NM Journalism Collaborative to cover? Contact Reyes Mata III at reyes@southNMnews.org.